Published 2 years ago. About a 4 minute read.
Image: Timberland/3BL Media

The company’s “Nature Needs Heroes” campaign aims to empower global community to be champions for the planet; since 2001, the brand has planted more than 10 million trees worldwide.

Global outdoor lifestyle brand Timberland committed today to plant 50 million trees around the world by 2025, as part of its pursuit of a greener future. This bold goal builds on Timberland’s longstanding commitment to make products responsibly, strengthen communities, and protect and enhance the outdoors. One key area of focus has been tree planting; since 2001, the brand has planted more than 10 million trees worldwide.

According to new research led by Swiss University ETH Zürich, the restoration of trees remains among the most effective strategies for climate change mitigation, and a worldwide planting program could remove two-thirds of all the emissions that have been pumped into the atmosphere by human activities. Trees help to clean air by removing carbon and releasing oxygen into the air; cool the air through evaporation; prevent erosion and save water, and more — which are just a few of the many reasons healthy rainforests such as the Amazon are so vital to the health of the planet. Over the next five years, Timberland says it will support multiple reforestation initiatives around the world in support of a greener future.

“At Timberland, we’re conscious of the impact our modern way of life has on the planet. And we believe as a global lifestyle brand, and as individuals, we have a responsibility to make it better,” said global brand president Jim Pisani. “Trees and green spaces help improve the quality of our planet, as well as individual wellbeing. Our commitment to plant trees is a real, measurable way to act upon our belief that a greener future is a better future. We encourage people everywhere to join the movement by taking their own actions — small or large — to be heroes for nature.” 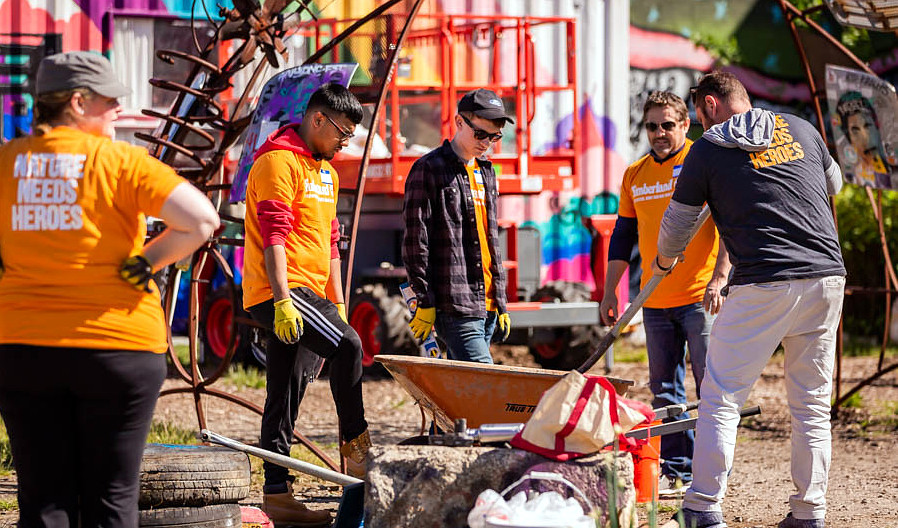 To kick off its pledge, Timberland has launched its largest-ever global campaign, “Nature Needs Heroes,” calling on consumers around the world to join the movement by taking simple, small actions for a healthier planet. The campaign celebrates 12 eco-heroes who are making lasting, positive change for the environment and their communities. Each hero dons new styles from the fall 2019 collection, with city greenscapes as the backdrop.

The campaign is comprised of robust media activations across print, digital, out-of-home, social media and PR. The brand will also engage the global community to be heroes for nature through a series of tree planting and greening events, including:

To help realize its 50 million tree commitment, Timberland will partner with a range of organizations that support the environment through large-scale regreening and tree-planting efforts. These organizations include the Smallholder Farmers Alliance, GreenNetwork, TREE AID, the UN Convention to Combat Desertification, Connect4Climate – World Bank Group, Justdiggit, Las Lagunas Ecological Park, Trees for the Future, American Forests and Treedom.

Projects in year one will focus on Haiti, China, the Dominican Republic, the United States, Tanzania and Mali – including support of the Great Green Wall — an African-led movement to grow an 8,000km line of trees across the entire width of Africa to fight climate change, drought, famine, conflict, and migration.

“We are thrilled to have Timberland join the Great Green Wall movement – an emerging new world wonder that promises to grow hope for millions of people in the face of the 21st century’s most urgent challenges,” said Mr. Ibrahim Thiaw, Executive Secretary of the United Nations Convention to Combat Desertification.

“I believe anyone can be a hero for nature just by doing something small on a daily basis,” said Inna Modja, international musician, activist, and ambassador for the Great Green Wall. “Recycle every day, buy fair trade products, research clothing, food, and coffee — at every step you can do something. If you are aware of these little things you can do, you will find yourself doing more and more.” A native of Mali, Modja is one of the eco-heroes being featured in the Nature Needs Heroes campaign.

LEADERSHIP
'A Compass for Just and Regenerative Business': 5 Principles of the Leadership We Need