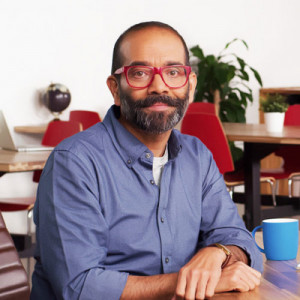 Ashish Gadnis is the co-founder of BanQu, the first ever blockchain supply chain and economic identity platform for refugees and people in extreme poverty. An award-winning financial tech company with a social cause, BanQu strives to eradicate poverty by connecting the “unbankable” to a secure, portable digital economic identity -- simply through a cellphone app. This revolutionary technology provides a pathway into the global economy, creating dignity through identity for people worldwide.

Growing up in poverty in Bombay, Ashish never forgot how it felt to stand in food lines to survive. He went on to build a successful career as a serial entrepreneur, serving as founder and CEO of multiple technology startups delivering global mobile solutions. In 2012, he sold his last tech company to a multi-billion-dollar consulting firm and soon after, BanQu was born.

Recognized for its groundbreaking for profit/for purpose innovation, BanQu has been the recipient of many awards including the MIT Enterprise Forum Pan Arab Innovate for Refugees Award, an Innovative Finance Grant from the Rockefeller Foundation, Best of Show at 2016 Finovate Awards, and 2016 Cashless World Award.

In addition to his role at BanQu, Ashish is also a senior strategic advisor to the United Nations on the Sustainable Development Goals 2030 agenda.