Published 2 years ago. About a 4 minute read.
Image: Vattenfall

Two strikingly different displays emerged this week, as the energy companies shared their visions of how we might achieve a global clean energy future. 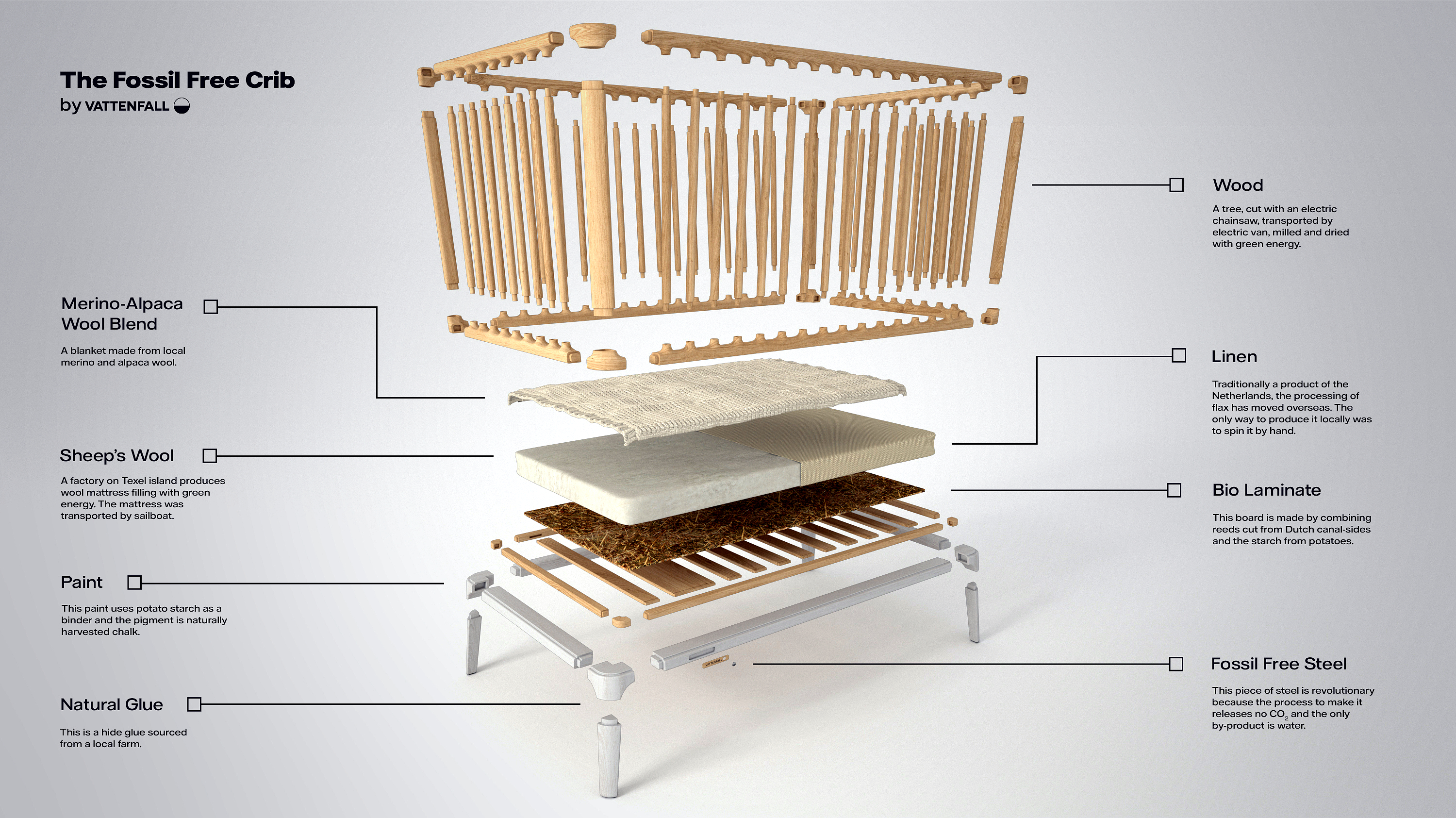 This week, Swedish multinational energy firm Vattenfall unveiled its latest offering; and it looks like an ordinary, yet incredibly expensive, crib: This particular baby bed was made without any fossil-based materials or energy — so, it cost a whopping $28,885 to produce.

Vattenfall, which is on a mission to enable fossil-free living within a generation, created the crib to illustrate the current difficulty in manufacturing everyday household items without the use of fossil fuels — for which they rethought the entire design and production process, combining futuristic and ancient methods, tools and materials:

The arduous process of making the crib proves that fossil-free product creation is possible, but it also highlights the complex challenges involved with shifting our current systems — reintroducing traditional crafts and manufacturing methods, many of which have been lost to big industry, to enable fossil-free production the new (old) norm.

“What this crib demonstrates is the challenge for the coming years in getting these types of processes scalable and affordable — and that we have to do this together. We are of course an energy company, not a furniture manufacturer, but we do want to take a broader perspective; and seek cooperation to help industry and the transport sector in becoming fossil free.” — Cindy Kroon, Director of Customers at Vattenfall Netherlands

Read more about Vattenfall’s efforts to make everything, including cribs, fossil-free in the future …

BP announces ambition to neutralize its carbon impacts by 2050 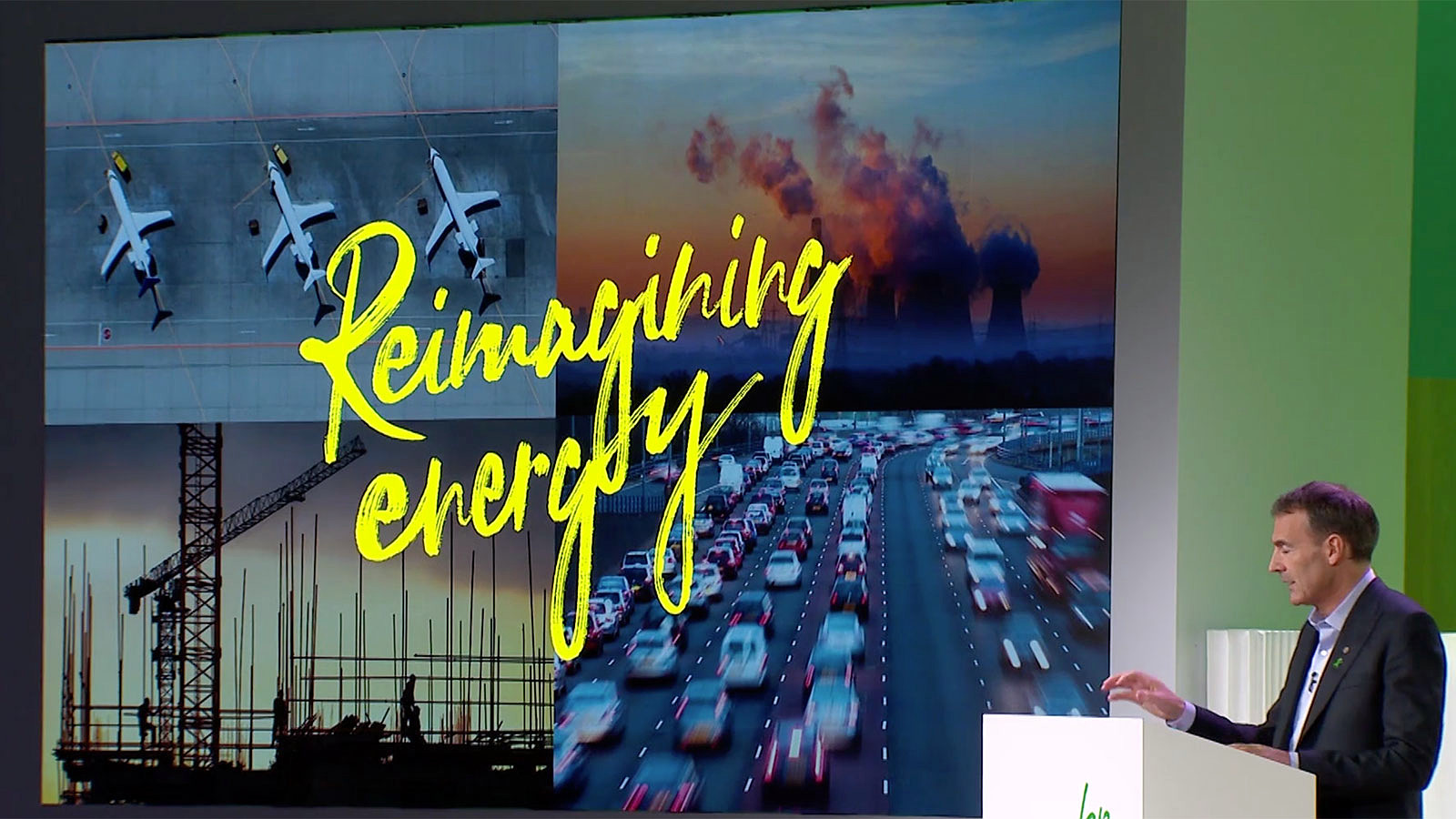 Meanwhile, BP struck a similar note this week — when freshly minted CEO Bernard Looney announced his ambition to “reimagine energy” and the company itself, in order to make BP a net zero company by 2050:

“This is what we mean by making BP net zero. It directly addresses all the carbon we get out of the ground as well as all the greenhouse gases we emit from our operations. These will be absolute reductions, which is what the world needs. If this were to happen to every barrel of oil and gas produced, the emissions problem for our sector would be solved. But of course, the world is not that simple; the whole energy system has to be transformed and everyone has a contribution to make — producers and sellers of energy, policy makers and everyone who uses energy.” — Bernard Looney

Therefore, BP says it “also aims to help its customers reduce their emissions by halving the carbon intensity of the products it sells, again by 2050 or sooner — offering customers more and better choices of low- and no-carbon products.”

While the ambition and some of the talking points sound impressive, skeptics have rightly pointed out that the announcement is “vague” and short on details; and it sounds like business will remain mostly as usual for the oil giant — Mooney admitted that BP will still likely be extracting and producing fossil fuels in 2050, though “almost certainly … less of them”; and shareholder interest will remain front and center during its “transformation.” Mooney said:

“BP needs to continue to perform as we transform. … We can only reimagine energy if we are financially strong, able to pay the dividend our owners depend on, and to generate the cash to invest in new low- and no-carbon businesses.”

As BusinessGreen pointed out, BP’s stock price ticked slightly upward after the announcement — signaling that investors might be more eager than BP to transition to a cleaner energy future.

BP joins Shell and Repsol, a small Spanish energy company, in setting time-bound targets for gradually reducing their carbon emissions — but as critics have pointed out, we’re still a far cry from a pathway that will help us achieve the goals set forth in the Paris Agreement.

And, as it’s still trying to redeem itself a decade after the Deepwater Horizon disaster — which a study released this week suggests was even more environmentally damaging than originally thought — BP needs to put much more money where its mouth is when it comes to “reimagining energy.”

Read more on BP’s announcement — and more reactions from the peanut gallery here and here.