New Metrics
At Last, a Business Case for CSR That Even Milton Friedman Could Love -- The Sustainability Effect!

Mark McElroy
Published 5 years ago. About a 11 minute read.

Way back in 1962, Nobel Prize-winning economist Milton Friedman famously proclaimed, “… there is one and only one social responsibility of business — to use its resources and engage in activities designed to increase its profits …” And while most of us in the CSR and sustainability worlds have tended to recoil in horror at those words, some of us have no less earnestly longed for a way to live up to them. Isn’t it possible, we’ve asked, for sustainability to be good for society, the environment and shareholder value, all at the same time? What better way to achieve sustainability in commerce, that is, than to disarm its most formidable foe - the presumed lack of a business case?

Indeed, for the past 40 years, the search has been on for a causal link between the sustainability performance of organizations and their economic bottom lines that managers and sustainability proponents alike could point to as a compelling business case for CSR. For the most part, though, the arguments put forward have been either dubious or weak, leaving most of us on the sustainability side with little more than a moral case to work with (e.g., that it is deeply unethical for businesses to put human well-being at risk by failing to curtail their greenhouse gas emissions, constrain their use of water, pay a livable wage, etc).

Valiant efforts, too, have been made in the capital markets to discover the missing links, if any, between the sustainability performance and market capitalizations (caps) of listed firms. All told, however, such efforts have done little more than reveal the occasional correlations between some companies’ strong CSR performance and their financial results, but never in ways that make it clear which is the cause and the other the effect, or whether there should be any connections between them at all. Such are the dubious cases for CSR.

Others have pointed to the effects of sustainability on profits, arguing, for example, that improving the eco-efficiency of a firm:

All true, perhaps, but does it go far enough?

Apparently not. The fact is that most organizations are still operating in empirically unsustainable ways, particularly when it comes to their environmental impacts. Most of the world’s ecological crises, in fact, are clearly attributable to the effects of commerce and are only getting worse, despite the conventional wisdom of eco-efficiency, “green” products and services, employee recruitment and retention, risk management, etc. Such are the weak cases for CSR.

Now, however, has come a stunning revelation: that the measurable and manageable reputations of firms can causally, and with scientific rigor, be tied to their market values, and that their sustainability performance, in turn, contributes to their reputations. If this is true, and it demonstrably is, it amounts to nothing less than a seismic development in the field — a watershed event that will forever change the way we think about sustainability in commerce. Indeed, this is exactly the kind of business case for CSR that even Milton Friedman could love: Strong sustainability performance enhances corporate reputations; and strong corporate reputations, in turn, drive higher market values. Think of it as the sustainability effect on market value — a powerful new ROI for CSR that changes everything!

The theoretical and statistical basis for this comes mainly from research performed over the past several years by Simon Cole and his team at Reputation Dividend, a UK-based consultancy with a presence in the U.S. Using reputation data reported in the Most Admired Companies studies published annually by Management Today in the UK and Fortune in the U.S., Cole and his colleagues have revealed the proportions of market caps directly attributable to corporate reputations, including their CSR performance. Market values, they have found, are to a verifiable degree positively correlated with CSR performance.

In total, there are nine aspects or components of reputation that Cole and his colleagues focus on to make their determinations. Here is how they are defined in the U.S.:

The methodology used by Reputation Dividend makes it possible for them to determine what the Reputation Contribution is for each of the nine components to the market cap of a firm, the sum of which at the end of 2014, for example, was reportedly close to 17 percent of the total value of the S&P 500, or $3.329 trillion (see Figure 1). 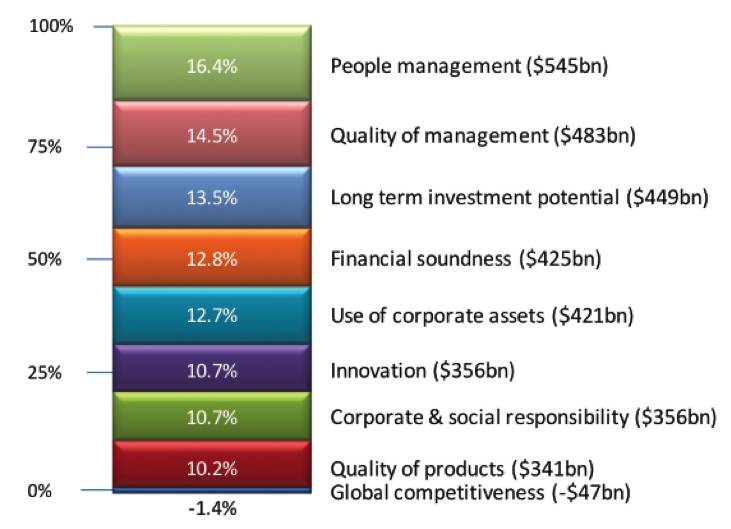 This is significant because on average only half the stock values reflected in market caps can be attributed to the tangible assets or book values of listed firms (often much less). This raises the question of where the other half comes from. These are the so-called intangible assets we hear so much about. The particular contributions of reputation, then, are what we’re focusing on here, the average of which in the S&P 500 at the end of 2014 was, again, about 17 percent, or roughly one-third that index’s total intangible value. For individual companies, the contribution can be much higher or lower. Cole and his colleagues, for example, have determined that the Reputation Contribution alone to Apple’s 2014 year-end market value was 49.5 percent or $320.3 billion (see Figure 2)!

Take Apple, for example. Its market cap at the end of 2014 was about $647 billion. Even a mere 1 percent increase in its value would have been about $6.5 billion. And of the $320.3 billion already attributable to its reputation that year, Cole and his colleagues found that at least $26 billion of it could be traced to its CSR performance alone. That’s a hell of a business case for sustainability — an ROI the likes of which we’ve not seen before. 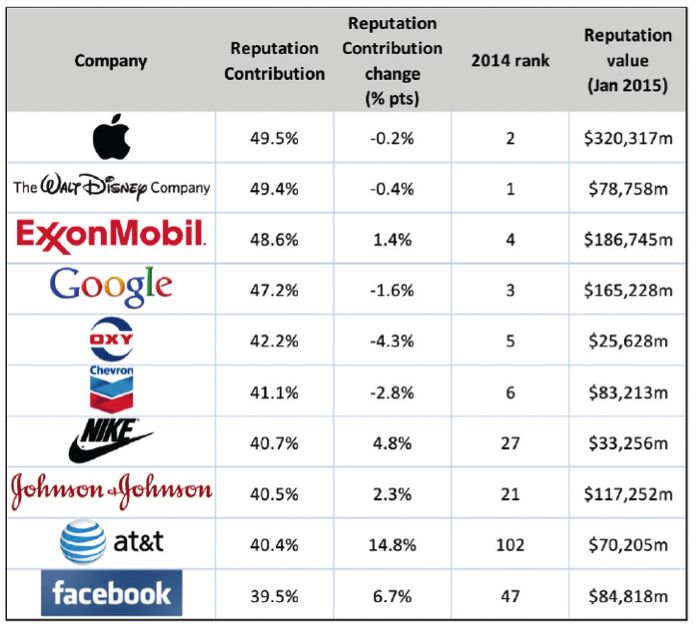 Perhaps the most significant implication of Cole’s research, then, is what it tells us about how CSR and sustainability management should be oriented. Reputations reside in the minds of observers — particularly stakeholders, whose interests, after all, are at ‘stake’ in the performance of organizations. If what organizations want, therefore, is to increase their market values by strengthening their reputations, there can be no better way of doing so than by carefully managing their impacts on resources that stakeholders rely on for their well-being. Their impacts, that is, must be sustainable!

What might this mean? Well it would first mean that the CSR and sustainability performance of a firm should be thought of in terms of what its impacts on vital resources are that stakeholders (shareholders included) rely on for their well-being. In order to be sustainable, an organization must not put either vital resources or the well-being of those who depend on them at risk. CSR and sustainability programs, that is, must be singularly stakeholder-centric. And when they are, the payback or ROI in terms of impacts on market value can be enormous — demonstrably so, and with statistical reliability.

In the evolving language of CSR and sustainability, this translates into a school of practice called Multiple Capital Accounting, a new approach to the field that Australian scholar Jane Gleeson-White describes in her recent book, Six Capitals, or Can Accountants Save the Planet?, as “only the second revolution in accounting since double-entry bookkeeping” and “of seismic proportions.”

At present, there are only a handful of methods conceived with such an approach in mind, including perhaps most notably the MultiCapital Scorecard (MCS) method. At the heart of the MCS is the goal of ensuring stakeholder well-being, a precondition for which is managing a company’s impacts on vital capitals in such a way as to maintain their health and sufficiency. This is also known as Context-Based Sustainability.

It should also be clear that when we take a stakeholder-centric perspective of CSR, far more than just the one CSR-related component of Reputation Dividend’s nine-part taxonomy can be tied to a firm’s sustainability performance. When viewed from a Triple Bottom Line (TBL) perspective, many if not most of the other components also come rushing into play. Because just as firms owe social and environmental duties of performance to their non-shareholder stakeholders, so too do they owe economic duties to their shareholders.

Indeed, we could even say that most of the 17 percent market cap attributable to Reputation Contributions in the S&P 500 in 2014 was tied to the TBL broadly construed, and not just the CSR piece, since most of the nine components of interest involve impacts on vital capitals that stakeholders of all walks rely on for their well-being (again, shareholders included). Assuming a TBL/multiple capital orientation to CSR, this is the right way to look at things: Sustainability performance and the reputation it builds is about impacts on all vital capitals for the sake and well-being of all stakeholders, not just some of them. This is integrated thinking in its best and most progressive form.

In order to pursue this line of thought, CEOs and their CSR, sustainability, finance, risk management and communications managers should actively collaborate in such a way (see Figure 3) as to: 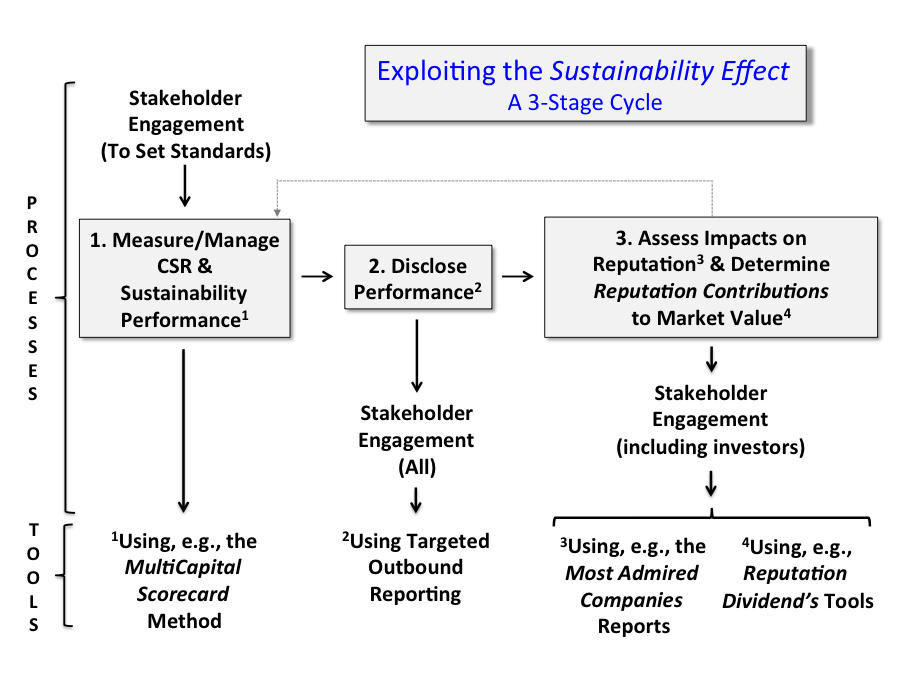 This is the time and rationale, therefore — the definitive business case — for corporate CSR and sustainability management programs to enter into their next phase of development: the Triple Bottom Line phase now made possible thanks to integrated thinking and the advent of Multiple Capital Accounting. Never before have firms been faced with the prospect of being so generously rewarded for their CSR and sustainability performance in the form of increased market values. The more authentically sustainable a firm is, the higher its market value can be, thanks largely to what the new science of reputation tells us is the sustainability effect on market caps. Friedman himself couldn’t be happier!

FROM PURPOSE TO ACTION: BUILDING A SUSTAINABLE FUTURE TOGETHER
Are you ‘Looped In’? Circular Economy Leaders Share Their Latest Solutions

THE NEXT ECONOMY
Regeneration: Understanding the Paradigm Change and How We’ll Get There

SUPPLY CHAIN
MSC: Progress Has Been Made in Sustainable Fishing, But Change Needs to Happen Faster