Mark McElroy
Published 8 years ago. About a 5 minute read.

With all of the airtime being given to materiality and integrated reporting these days, I am increasingly asked to explain what the context-based sustainability (CBS) perspective might be for each. Indeed, the implications of CBS are quite profound on both fronts. But before I explain them, let me first take a moment to remind readers of what CBS is and how it is defined.

Context-based sustainability is an approach to measurement, management and reporting that interprets performances in terms of what an organization’s impacts on vital capitals are relative to norms, standards or thresholds for what they would have to be in order to be sustainable (see Figure 1 for a view of Vital Capitals and the Triple Bottom Lines to which they correspond). Like all doctrines in the field (which also include CSR, Eco-efficiency and Citizenship), CBS comes equipped with its own set of metrics and key performance indicators, if only in form. 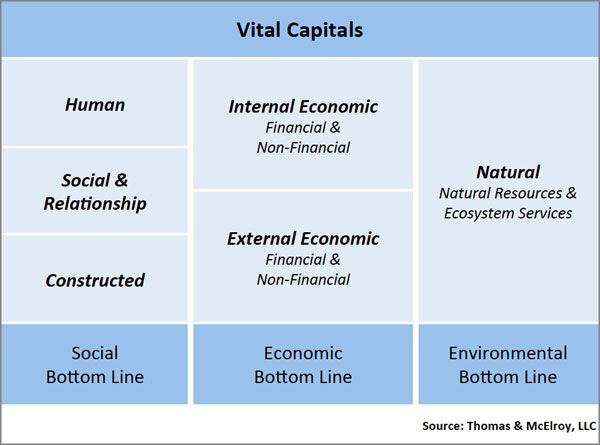 Regarding materiality and integrated reporting, the first thing to understand is that neither is, by definition, context-based, at least not in terms of the way leading standards are defined. The leading international standard for integrated reporting (the IIRC’s Framework), for example, does not explicitly call for context-based reporting (much less context-based metrics) and essentially leaves it up to each organization to decide what sorts of metrics should be used. Its position on materiality, however, while no less silent on the subject of context, is not quite so neutral.

Here it may be useful to look at how three leading standards for measurement and reporting (GRI, SASB and the IIRC) actually define materiality and how they compare. First GRI (G4):

The report should cover Aspects that:
Reflect the organization’s significant economic, environmental and social impacts; or
Substantively influence the assessments and decisions of stakeholders

Next comes SASB, which essentially embraces the FASB (Financial Accounting Standards Board) definition:

Information is material if omitting it or misstating it could influence decisions that users make on the basis of the financial information of a specific reporting entity.

And last the IIRC, which explains materiality as follows:

An integrated report should disclose information about matters that substantively affect the organization’s ability to create value over the short, medium and long term.

What we see going here is a kind of battle for mindshare in materiality. In the case of the SASB and IIRC definitions, shareholders and investors (including lenders) are given preferential treatment. Some refer to this as shareholder primacy. Materiality is thereby narrowly defined so as to place the needs and interests of shareholders above all others. A thing is material if and only if it matters to shareholders.

In the case of GRI, things are not quite so parochial. Certainly shareholders matter, but they are not the only constituents to whom standing is bestowed. Other stakeholders, as well, are recognized, as are social and environmental impacts that may have nothing to do with the financial performance of a firm, but which are no less important to human well-being.

The IIRC definition could also be interpreted in broader terms, but only if it were the case that the type of “value” it refers to is something other than financial value. And while their position on this matter is arguably ambiguous at best, I think it safe to say that the financial interpretation is the correct one. Listen, for example, to how they explained things in a background paper of theirs published several months prior to the release of the Framework, entitled Value Creation:

Integrated reports should enable providers of financial capital to assess whether, to what extent and how an organization’s use of, and outcomes for, all of the capitals adds to financial value.

What we have going on in the marketplace of sustainability measurement and reporting, therefore, is as I say a battle between the — let’s call it classical — financial interpretation of materiality and the more modern and expansive multi-stakeholder one. The former is narrow, the latter is broad. So what’s a company to do when it comes to defining materiality for themselves?