Paul Polman
Published 6 years ago. About a 5 minute read.

Paul Polman is CEO of Unilever, a member of the Scaling Up Nutrition (SUN) Movement Lead Group and Chairman of the World Business Council for Sustainable Development. This is his observation following his involvement at Lima COP 20.

It was Gandhi who said, "What we are doing to the forests of the world is but a mirror reflection of what we are doing to ourselves and one another." This wisdom predated our knowledge of the climate change challenge by half a century, but it couldn't be more prophetic.

Destruction of natural forests is responsible for up to 15 percent of climate-changing emissions, greater than the entire transport sector. And the health of forests is closely linked to our future ability to feed a global community of 9 billion people — when even today 800 million people go hungry. We need more food, more forests, better livelihoods for smallholder farmers, and lower emissions. If we want any of them, we must have all of them.

Forests have been centre stage at the climate talks in Lima as people wake up to the scale of the climate challenge, and the importance of an action plan for forests if we are to achieve climate and food security. This week, leaders from forested countries, indigenous peoples groups, business CEOs, civil society and UN officials have come together in a series of meetings to work out how to do just that.

International financing, in the form of REDD+ from multilateral funds, is being committed to in increasingly high amounts, with the potential to have on-the-ground impact in countries such as Indonesia, Peru, Brazil and Paraguay. The role of indigenous people in protecting forests, and the importance of governance reforms to issues of land tenure, are at long last being understood and addressed.

These discussions are also grounded in existing examples that show what can be done. Since 2005, Brazil's rate of deforestation has dropped 70 percent below the historical average, whilst at the same time food production has increased by nearly half. A combination of public policy and private sector commitments has kept 3.5 billion tonnes of carbon dioxide out of the atmosphere, making Brazil a world leader in climate change mitigation. Brazil's Latin American neighbours, Mexico and El Salvador, have made also made good progress, respectively pioneering payment for ecosystem services and forest restoration.

This leadership comes at the end of a year that has also seen an unprecedented paradigm shift in corporate commitments to tackle deforestation. With the Consumer Goods Forum pledge to zero net deforestation by 2020 providing a strong signal, the market has been shifting rapidly. An extraordinary 96 percent of globally traded palm oil is now covered by no-deforestation pledges, following a recent announcement by Musim Mas, one of the biggest palm oil players in Indonesia. The Tropical Forest Alliance, a public-private partnership between consumer goods businesses, governments and NGOs, is now working in multiple countries to turn these commitments into progress on the ground. Progress in Indonesia has recently been boosted by President Widodo's announcement of a crackdown on deforestation and peat land destruction; and in Brazil by the extension of the soy moratorium until May 2016, ensuring that soy-driven deforestation does not rise while the country's new Forest Code is implemented.

Other countries are moving fast, too. At the UN negotiations, under the banner of the 'Lima Challenge', 13 forest countries from around the world including Colombia, Peru and Liberia, committed to put forward plans for emissions reductions from forests, emphasising what they could achieve under their own steam and what more they could do with international support and partnership. These countries have been starting to break down the traditional divide between developed and developing countries that have dogged climate negotiations to-date. With the headline outcome of the Lima conference the breach of this 'firewall' and the creation of emissions-cutting obligations on all countries, we will surely see more of these types of positive challenges. With the level of ambition in the draft text still unacceptably low, such 'stretch targets' for forest countries, in partnership with developed economies and the private sector, are an example of the shift in both thinking and practice needed to deliver a low-carbon transformation.

The New York Declaration on Forests, launched at the UN Secretary General's Climate Summit in September, also shows the way forward for a global climate agreement, with clear roles for forest countries, developed economies, civil society, indigenous people and the private sector alike. And the energy and enthusiasm of the decision-makers to adopt a landscapes approach — treating forests and agriculture as part of a greater whole — is breaking down silos and showing that transformational change is without our reach.

Fifty years after Gandhi's insight, we face a choice about our future and that of the forests that sustain us. We know what choice we have to make. 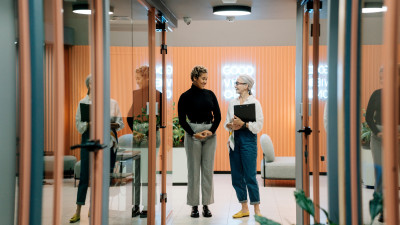 LEADERSHIP
US Demand for CSOs Grew 228% in 10 Years, But Diversity Remains a Challenge