While it is common practice now for corporate sustainability reports to include materiality matrices, whether or not they actually serve their purpose is debatable. Indeed, we (the Center for Sustainable Organizations) don't think they do, and have some suggestions for how to improve them.

The relevance of materiality matrices to sustainability measurement and reporting was perhaps first established by the Global Reporting Initiative (GRI). GRI, for its part, defines materiality as follows (G3.1, p. 8).

The information in a report should cover topics and Indicators that:

At the very least, then, behaviors that result in significant economic, environmental and social impacts are material, or at least potentially so. It is important to add, we think, that the reason why such impacts are material is because they affect the interests and well-being of others (i.e., stakeholders).

This leads to GRI’s second dimension of materiality. As presently worded, the second condition is rather vague — “assessments and decisions” about what, one might ask? More important is the fact that materiality is first and foremost about the first dimension, and that any impacts that are deemed material should, by that standard alone, be of automatic interest to shareholders; which is what GRI’s second dimension seems to really be about (i.e., shareholders and their investments).

The particular type of materiality matrix advocated by GRI takes the form of a graph (see Figure 1). Figure 2 depicts the same idea in the form of a 2-by-2 matrix. Note the labeling of the axes in both cases. Along the x axis, we see GRI’s first dimension of materiality; along the y axis, we see the second one. Figure 2 also includes some interpretation on our part as to how impacts in each quadrant can be understood. 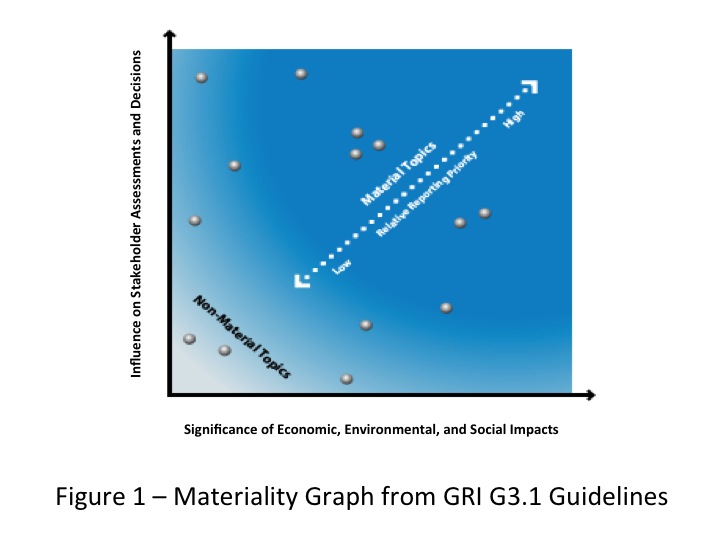 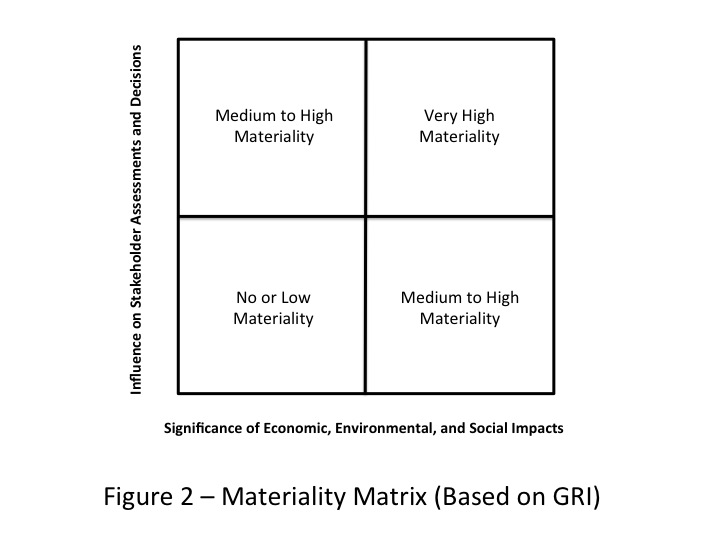 Now while it is true that many mainstream corporate sustainability reports do include materiality matrices, they largely depart from the structure and form suggested by GRI and instead take the form shown in Figure 3. Somehow and somewhere, someone decided to change the impacts criterion shown on the x axis and replace it with the version shown in Figure 3 (or some variation of it). Instead of considering impacts on the economy, the environment and society a la GRI, materiality, under the new view, focuses instead, on whether, and to what degree, impacts affect the organization and/or its business goals. 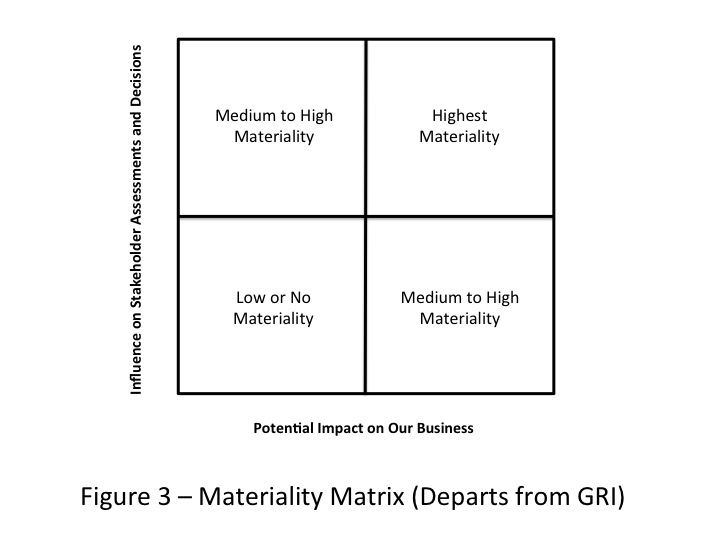 Exactly when this myopic change was made, and by whom, is unclear to us. But what is clear is that it amounts to a perversion of the idea of materiality in sustainability reporting, because it essentially cuts out consideration of what are arguably the most material issues: the broad social, economic and environmental impacts of an organization, regardless of how they relate to a particular business plan or strategy.

Let’s turn now to what we believe is a better model. First, we define materiality as follows:

What makes an impact material or not, then, is the effect it has or should have on resources required for stakeholder well-being. So if we remove consideration of our broad social, economic and environmental impacts and replace it with something else, we deprive ourselves of what is arguably the most important criterion for determining materiality: our broader impacts in the world and their effects on human/stakeholder well-being.

A much better model for what a materiality matrix should look like is shown in Figure 4. Derived from a school of sustainability theory and practice known as context-based sustainability, the matrix shown is based on the view that materiality is principally about impacts on vital resources in the world, which such resources are required for human well-being. Indeed, it is the existence of such impacts that determines, at least in part, whom an organization’s stakeholders are, and what the focus of its sustainability program should be. 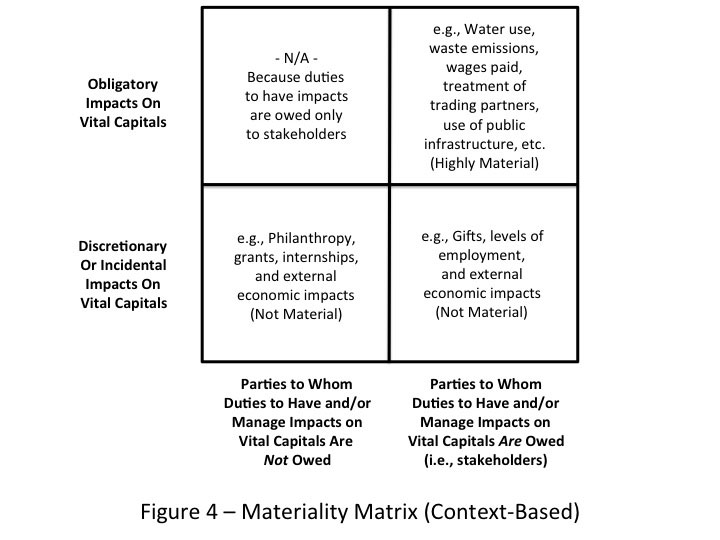 Notably, then, the x and y axes in our context-based materiality matrix both pertain to impacts on vital resources in the world, but in two different ways. One, the x axis, differentiates between two different types of beneficiaries of such impacts (those to whom moral or legal duties are owed by the organization to have and/or manage their impacts on vital resources versus those to whom no such duties are owed); and the second axis, the y axis, which deals with impacts that are either discretionary (or merely incidental) or obligatory. The obligatory impacts stem from non-voluntary duties and obligations owed to stakeholders; the discretionary or incidental ones do not.

What the context-based matrix tells us is that all impacts that fall into the upper-right quadrant must be addressed in a sustainability program and/or report because they pertain to moral or legal obligations an organization has to have and/or manage its impacts on resources of vital importance to stakeholder well-being. The upper-left quadrant, by contrast, is not applicable, since the very existence of an obligation to have impacts of one kind or another implies that the parties involved are stakeholders to whom duties are irrevocably owed.

The lower-left- and right-hand quadrants pertain to impacts that are fundamentally non-material to an organization's sustainability performance because they involve impacts that are completely voluntary, if not merely incidental. What's more, if not having the impacts involved (e.g., deciding not to make a grant) cannot be construed as unsustainable, then the actions or inactions involved cannot be germane to sustainability performance at all, and are therefore immaterial. Thus, it is only actions and impacts that fall into the upper-right quadrant that must always be included in the scope of a sustainability program (or report), regardless of whether impacts in the other areas are included as well.