Mark McElroy
Published 7 years ago. About a 8 minute read.

By now, most readers of these pages will have noticed the emergence of social and environmental monetization schemes intended to quantify in financial terms the otherwise non-financial impacts of organizations. But do these schemes really qualify as sustainability measurement and reporting systems or even integrated reporting methods as some of their makers claim?

Five methodologies come rushing to mind here. First is the Environmental Profit and Loss (or EP&L), co-developed by PUMA, PricewaterhouseCoopers and Trucost in 2011. As the name implies, the EP&L deals only with the environmental impacts of a company by assigning a monetary value to natural resources and ecosystem services used throughout its supply chain — cradle to gate, as they say.

Second is another system developed by PricewaterhouseCoopers (PwC) known as Total Impact Measurement & Management (TIMM). Like the EP&L, the TIMM system assigns a monetary value to the non-financial impacts of an organization, although in the case of TIMM the impacts of interest are not limited to natural resources and ecosystem services. Instead, TIMM monetizes social, economic, environmental and tax impacts.

Third is a system developed by KPMG called KPMG True Value. Like the PwC method, KPMG’s system is designed to assign values to the social, economic and environmental impacts of an organization, resulting in what the firm refers to as societal value. And like all of the methods discussed thus far, the KPMG method does this by putting a price on so-called positive and negative externalities, which are the impacts of an organization’s activities in the world expressed in terms of positive and negative valuations — monetary valuations, that is.

Fourth is a perspective on integrated reporting put forward by Ernst & Young (EY) in a report they released earlier this year entitled, Integrated Reporting — Elevating Value. Like the other methods summarized above, EY’s approach is heavily based on the idea of assigning a monetary value to the non-financial and often intangible impacts of organizations. Unlike the others, however, EY also takes the step of embracing the multiple capitals model put forward by the International Integrated Reporting Council (IIRC) in its framework for integrated reporting. It is impacts on vital capitals, they believe, that should be monetized.

Last is a new initiative organized by the Natural Capital Coalition to develop a standard protocol for putting a value on the impacts of organizations on natural capital. Known as the Natural Capital Protocol, it remains to be seen whether the resulting method will involve the assignment of monetary values to impacts on natural capital, but things do seem to be heading in that direction. Of additional significance here, as well, is the fact that like the EY approach and the IIRC framework upon which it is at least partially based, the Natural Capital Protocol is capital-based in its orientation to the subject, albeit with only one capital in mind: natural.

And now to the question highlighted in the title of this essay: Does monetization add up to sustainability reporting? Or even integrated reporting, for that matter?

First is that none of the five systems summarized above take social, economic or environmental limits or thresholds explicitly into account. The sustainability of an environmental impact, for example, can only be determined by reference to what the limits in availability of natural resources or ecosystem services (i.e., natural capital) are and how many others are using or depending on them for their well-being.

This leads to the idea that there are limitations in the carrying capacity of vital capitals and that the sustainability of an organization depends on how its impacts on capitals compare to organization-specific standards for sustainability. None of this kind of thinking, however, can be found in any of the monetization schemes referenced above. It’s as if all resources are infinitely available, and they merely become increasingly expensive the more that we use. The fact that certain rates of use might exhaust available supplies and should be priced, therefore, as exponentially or infinitely higher in cost is nowhere to be found. As measures of sustainability performance, the methods identified above all fail on their face.

The second reason why monetization schemes fail to address sustainability performance is that, despite claims to the contrary by at least some of them, they really do not constitute integrated reporting methods at all, not even the ones that overtly comply with the IIRC’s integrated reporting framework. Why not? The answer lies in the manner in which the IIRC’s framework positions the multiple capitals relative to one another.

There are two ways to look at this: We could think of the capitals as sitting side by side on a level playing field with no capital being more important than any other. Or we could think of one capital — economic — being more important than the others, therefore relegating the others to serving in a subordinate and supporting role to the most important one: economic (see Figure 1, below). 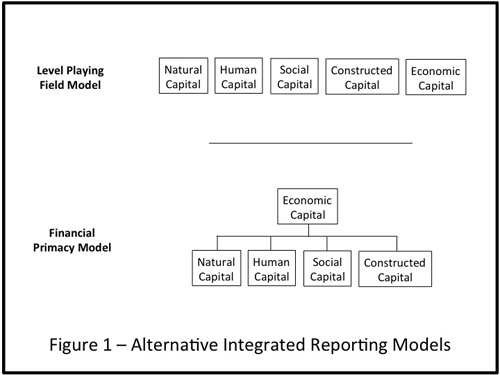 To the extent that all of the monetization schemes mentioned above focus mainly, if not exclusively, on the expression of non-financial impacts in monetized terms, it is clearly only because of their goal of assessing such impacts relative to their effects on shareholder value — economic capital. Whether or not such impacts are also sustainable vis-à-vis social, economic or environmental thresholds in the world is of less interest to them.

Indeed, and sadly, it is quite literally the case, I think, that the IIRC’s framework is not a bona fide integrated reporting framework at all. To qualify as one, it would have to hail from the Level Playing Field camp, not the Financial Primacy one, as it so clearly does. For all intents and purposes, then, there is no integrated reporting standard extant at this time.

A much better approach to integrated sustainability reporting, I think, would be one that fits the following description:

The only system that fits this description so far as I know is the MultiCapital Scorecard™ (developed by myself and Martin Thomas). It is a context-based integrated measurement and reporting system currently being piloted by Ben & Jerry’s in Vermont. Importantly, it is not a system designed to monetize non-financial impacts in the service of Financial Primacy — it is grounded in the Level Playing Field view of integrated performance. Monetization, it turns out, has nothing to do with integrated sustainability reporting and can be no substitute for doing the kind of context- and capital-based analysis required to understand the sustainability performance of an organization in an unbiased and authentic way.