Mark McElroy
Published 6 years ago. About a 8 minute read.

Last August, I published an article here in which I described what, to me, is the most compelling business case for corporate sustainability or CSR extant: the fact that it literally drives the market values of publicly traded firms up or down in measurable ways.

Either way, the embrace of sustainability gets us to the same place: improved sustainability performance. The extrinsic case, however, has been harder to make – until recently, that is. Indeed, for all of you out there who might be struggling with how to succeed in a world that all too often seems to care only about making money, have I got good news for you.

When a company demonstrably improves its sustainability performance and takes steps to be seen as such, its market cap will go up – measurably so. Everybody wins, the intrinsic and extrinsic camps alike. I call this the Sustainability Effect.

Effecting Change from the Inside Out

Join us as sustainability pioneers from Iron Mountain, Unilever and Vanguard Renewables share the phases, timelines, and texture of their journey to effect change from within to accomplish real sustainability impacts — June 7 at Brand-Led Culture Change.

But don't just take my word for it. Take a look as I did in August at the reports put out by the UK-based consultancy Reputation Dividend (RD) on how CSR reputations measurably affect the market values of public firms. At the time, I commented on RD’s 2015 reports. This time I want to comment on its 2016 reports, only one of which has been issued thus far - its UK report (their U.S. report is due out in April).

With the UK report in hand, I took the opportunity to contact my friend Simon Cole, a founding partner at RD, to probe a bit deeper about how CSR-related reputations contributed to the market values of specific firms as of the end of 2015. But before I tell you what I learned, let me be clear about the theory behind all of this:

Now if all of this is true – and it demonstrably is – companies that actively manage their CSR and sustainability performance, and whose performance is strong because of it, stand to benefit in the form of higher market values. Indeed, if you’re running a CSR program in a public company and are looking for ways to demonstrate value in conventional, hard-dollar terms, look no further. The more advanced your company’s sustainability program, the more it can expect to be recognized as such and be rewarded accordingly.

What Are Leaders Doing Differently? 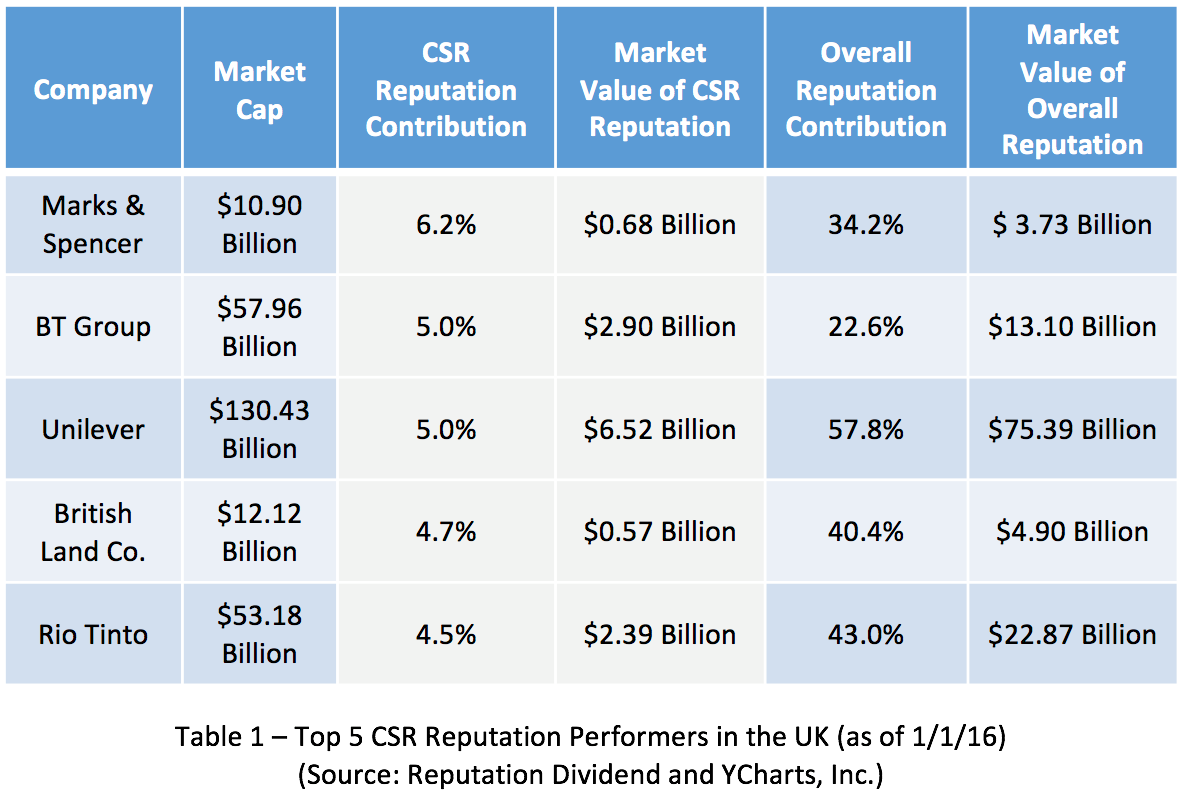 All of this implies, of course, that the top 5 companies in the UK are doing something different in their CSR and sustainability programs. If so, what is it? And where is the evidence? What is it that other firms could be doing differently to help increase their own market values by way of the Reputation Contributions of their CSR and sustainability programs?

The answer is that there are three things top Reputation Contributors are doing in their CSR programs that arguably accounts for their superior performance:

All three factors are vitally important, but it is the third goal that really differentiates the leaders from the laggards. Why? Because it is only science- or context-based goals that express sustainability goals in authentic or literal ways. Anything less tends to be about eco-efficiency, incrementalism or in the case of social impacts, philanthropy – nothing wrong with any of that, mind you, just not the same as sustainability.

Sustainability leaders, by contrast, frame their goals in terms of ecological limits, social duties and obligations, and other science- and context-based ways, and then take steps to manage and report their performance against them – aggressively report. That’s how they build comparatively stronger CSR reputations and reap their economic benefits in return.

But if all of this is true, shouldn't the Top 5 leaders in RD’s ranking this year in fact display the three characteristics I allege is emblematic of top performers? To answer that question, we must turn to another report soon to be published in the Journal of Cleaner Production by Bjorn et al in Denmark entitled, Is Earth recognized as a finite system in corporate responsibility reporting?

What Bjorn and his colleagues do in their very fine paper is report on the results of their analysis of 9,000 companies’ reporting histories to determine which ones, and how many, not only set science- and context-based goals, but actually measured, managed and reported their performance against them. Sound familiar?

The results of Bjorn et al’s analysis are striking in a number of ways, not least of which is that only 31 of the 9,000 firms they looked at actually set science- or context-based goals and then went on to measure, manage and report performance against them. That’s just three-tenths of 1 percent. Pretty pathetic, really. But let’s take a look at who those firms were and whether or not they overlap in any way with the analysis of Simon Cole and his team at RD.

Indeed, we find that there were three companies identified as top performers in the Bjorn et al study also located in the UK (i.e., the geographic boundary of the RD report): British Airways plc, BT Group plc and Unilever plc/NV. Moreover, two of those companies, BT and Unilever, were among the Top 5 performers in the RD analysis. This is significant to say the least.

Now I know all about the difference between correlation and causation and the dangers of confusing or conflating the two, not to mention the importance of sample sizes, but I believe there is genuine causality going on here. It takes no great leap of faith to assume that the strength of a firm’s CSR reputation probably has something to do with the quality of its CSR programs and performance, especially when the qualitative differences are plainly evident.

Indeed, as those of us who have been active in CSR for many years now know, sustainability performance must be managed and assessed in terms of impacts on social, environmental and economic resources relative to their limits and thresholds and not just in incremental terms. And that is exactly what these firms are doing in ways that others are not. In the vocabulary of CSR and sustainability management, they are practicing Context-Based Sustainability to one degree or another – the state of the art in CSR.

And so I take solace in being able to point to evidence of what I and others consider to be real causal connectivity between science- and Context-Based Sustainability and their effects on the market values of firms. This, in my view, is very significant indeed and very good news for the CSR/sustainability profession and for business in general. We should celebrate it.