Published 2 years ago. About a 3 minute read.
Image: Starbucks

Starbucks pilots NextGen cup but says no to reusables, for now

The new cups are lined with BioPBS™ — a solution for all coated paper packaging to make it recyclable or home compostable — created by one of the 12 winners of the NextGen Cup Challenge, of which Starbucks is a founding member.

Starbucks said it is also continuing to work with Closed Loop Partners, the NextGen Cup Consortium and other businesses on continuing to test and validate the recyclability of solutions from some of the other challenge winners, including the BioPBS™ cup; as well as with key stakeholders in the recycling industry to advocate for increasing the overall recyclability of cups and ensure they are ultimately accepted within municipalities.

But in what feels like one-step-forward,-two-steps-back-type development, Starbucks announced last week it has suspended the use of reusable beverage containers due to COVID-19 concerns. During this time, it will not serve beverage in customers’ personal cups or the store’s own “for here” cups, but it will continue to honor the 10-cent discount for anyone who brings in or asks for a reusable cup.

Starbucks has been joined by Dunkin’ in the US, and Tim Hortons and Second Cup in Canada, in halting use of reusable cups (though Second Cup says it will still use its own ceramic mugs for in-store drinks); and McDonald’s has done the same for its locations throughout Australia and New Zealand. No telling how long the outbreak will last or how much additional materials waste will be created in the meantime. 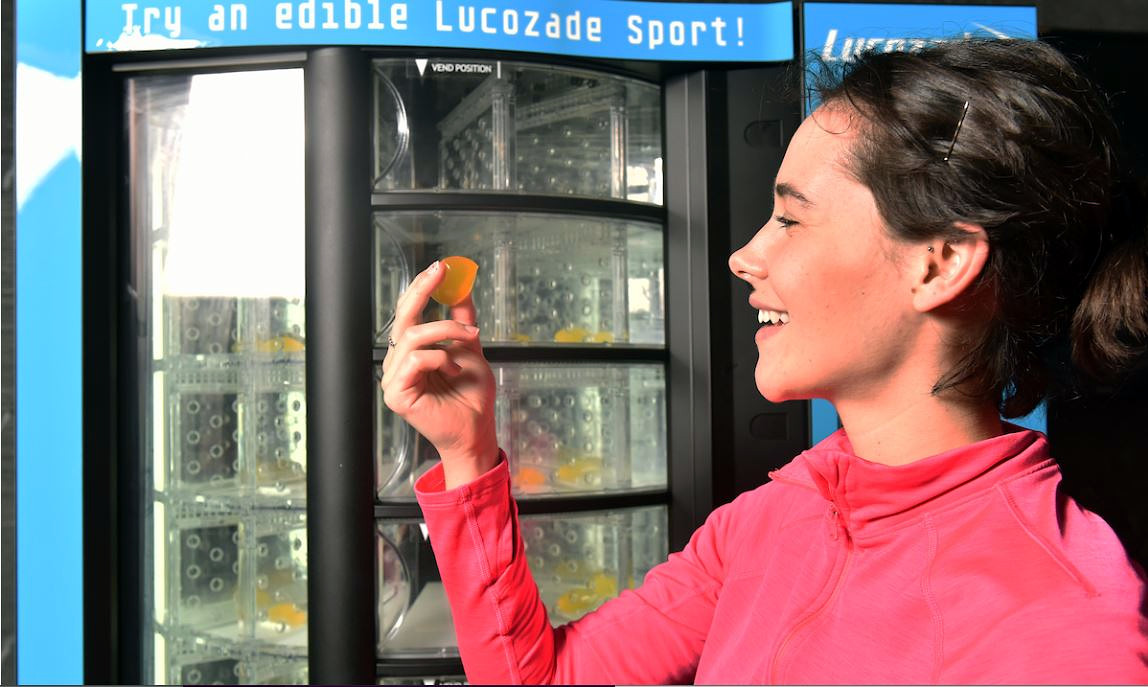 LRS recently partnered with Notpla, maker of the Ooho — an edible and biodegradable, seaweed-based beverage packaging solution — to explore alternatives to conventional plastic bottles. LRS first trialed Oohos at large-scale sporting events last year, including the 2019 London Marathon, at which over 36,000 30-ml Lucozade Sport Oohos were given away — and they were a hit with runners: A survey at the event found that 82% of those who tried Oohos filled with Lucozade Sport found them “appealing” or “very appealing.”

Now, thanks to funding from Innovate UK, LRS and Notpla have created a specialized vending machine that can dispense 30-ml Oohos containing Lucozade Sport. The machine can dispense up to 3,000 Oohos per day.

The vending machine trial kicks off the same week that LRS confirmed plans to offer Oohos at nine more sporting events this year, including the London Marathon Expo.

While good things are known to come in small packages, that may not translate for those needing to hydrate: As of now, Oohos can only hold up to 100ml (~3.4 fl oz), so we’ll see how viable they are as a scalable beverage packaging solution.

FINANCE & INVESTMENT
Water Risk Is a Financial Risk: Companies Will Soon Have the Tools to Calculate, Disclose and Mitigate It
Advertisement

FROM PURPOSE TO ACTION: BUILDING A SUSTAINABLE FUTURE TOGETHER
Finding New Within the Old: Innovating to Advance the Circularity of Plastic