How biodiesel use supports the Chicago Park District's mission to preserve its world-class park system for future generations.

In the 1830s, Chicago’s emerging government adopted the motto “Urbs in horto,” a Latin phase meaning “City in a Garden.” For nearly two centuries since, the city has worked hard to live up to this ideal.

The story begins with the protection of miles and miles of lakefront; and the creation of parks shaped by nationally acclaimed architects, planners and landscape designers — such as Daniel Burnham, Frederick Law Olmstead Sr., Jens Jensen and Alfred Caldwell.

Chicago is best known for sprawling lakefront parks such as Lincoln Park and Grant Park, but its residents also enjoy neighborhood green space and field houses year round. All told, the Chicago Park District, created in 1934, owns more than 8,800 acres of green space — making it the largest municipal park manager in the nation.

One of the Park District’s core values is preserving a world-class park system for generations to come. One of its strategies for a resilient future is to keep its operations efficient and environmentally friendly.

Since 2013, the Park District has used biodiesel, which burns cleaner than ordinary diesel fuel, to fuel park equipment ranging from lawnmowers to beach combers to log loader trucks (biodiesel can’t run in gasoline engines because it needs an engine that ignites by compression). The district partners with Darling Ingredients — which collects and donates used cooking oil that is then processed into biodiesel at Renewable Energy Group’s plant in Seneca, Illinois.

A recent pilot program in partnership with the Illinois Soybean Association checkoff program and the American Lung Association went a step further, by testing 100 percent biodiesel (B100) in some vehicles.

Most diesel engines are not compatible with pure biodiesel. So, early last year the Park District worked with Optimus Technologies — which has developed an innovative fuel system that enables diesel engines to run almost entirely on renewable biodiesel. They outfitted two garbage trucks, which collect trash on Chicago’s lakefront and in nearby parks, to run on B100. 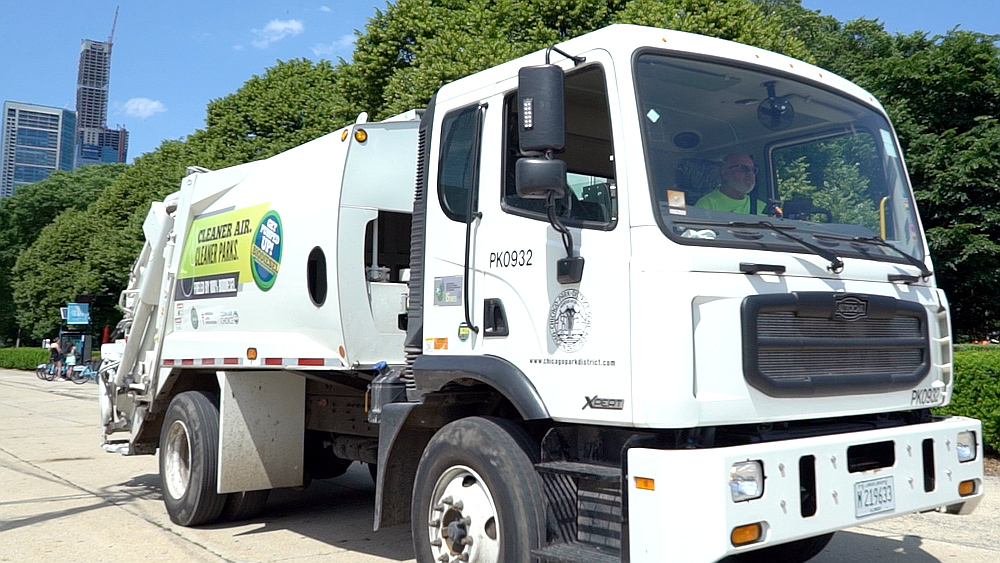 In the pilot project’s first year, participating trucks logged 12,000 miles and 2,690 hours of operation. The reduction in carbon dioxide emissions is the equivalent of planting 419 trees in Chicago parks annually.

The Park District’s B100 program reduces greenhouse gas emissions and particulates by 84 percent compared to standard, low-sulfur diesel fuel; according to a lifecycle analysis by Renewable Energy Group, the biodiesel producer. The analysis accounted for the process of recycling cooking oil from Chicago restaurants and transporting the fuel back to Chicago from the biodiesel plant.

“Through the B100 project, we are seeing unprecedented reductions in carbon emissions, supporting a healthier and more sustainable environment for the people of Chicago,” said Mike Dimitroff of the Chicago Park District’s Department of Cultural and Natural Resources. “You would be hard pressed to find a more sustainable option for our refuse trucks than B100 biodiesel.”

The Park District’s biodiesel-powered vehicle program far surpasses the Illinois mandate that government fleets use at least 5 percent biodiesel. By pursuing higher aspirations, the Park District tries to honor its inheritance and build for the next generation.