Cleantech
Imagine, Never Having to Charge Your Personal Devices Ever Again

Powerfoyle is a new solar material capable of converting all types of light into energy — making it possible to charge any device or appliance from natural daylight, sun or indoor lighting.

Solar is booming. Now, a Swedish tech innovator is putting its potential in the hands of the masses — one rechargeable device at a time.

Almost 200 GW of new clean energy generation capacity was added last year, according to Ren21 figures; and the lion’s share of that — 115GW — came in the form of solar power.

In fact, the solar photovoltaics market grew 12 percent in 2019, with strong demand across the US and Europe making up for a substantial fall in sales in China. Worldwide, on- and off-grid capacity now stands at around 627 GW. Just a decade ago, that number was less than 23 GW.

The popularity of solar energy use is no surprise. It has quickly become the most competitive option for clean electricity generation in a number of places, whether for residential or business use — and, increasingly, for the big utility players. Prices for solar have fallen by more than 80 percent since 2010.

By the end of last year, 22 nations had enough solar power capacity to meet at least 3 percent of their electricity demand; 12 countries had enough for at least 5 percent.

While such deployment speed might not be enough to satisfy the IEA’s ‘sustainable development’ scenario (it predicts the world will need 300 GW of new clean energy capacity a year between 2018 and 2030), and rooftop solar installation forecasts for Europe and the US have been slashed this year, thanks to COVID-19; solar is certainly having its day in the sun right now.

But while energy generation capacity is rolled out at speed, making effective and efficient use of the energy created by the Sun remains a fertile testbed for innovators everywhere. Creating energy is one thing; harvesting it, storing it and making it available to people everywhere is quite another.

One such innovator is Giovanni Fili, founder of Exeger — which has spent the last decade exploring how centralised power distribution might be transformed. Inspired by the work of Professor Michael Grätzel, a wizard in the world of electron transfers and photovoltaics, the business has taken many of his theories and developed them further into a revolutionary new, light-harvesting material that can be mass-produced.

“From the start, our vision has been to go from one centralised power distribution, to a distributed clean power generation where individuals can have control over their power consumption,” Fili told Sustainable Brands™ in a recent interview. “We wanted to democratise energy.”

To do this, Fili and his team have created Powerfoyle — a patented solar material capable of converting all types of light into energy, making it possible to charge any device or appliance from natural daylight, sun or indoor lighting. Powerfoyle can be printed in any shape, for any surface; and can take almost any texture — such as leather, wood or fabric. 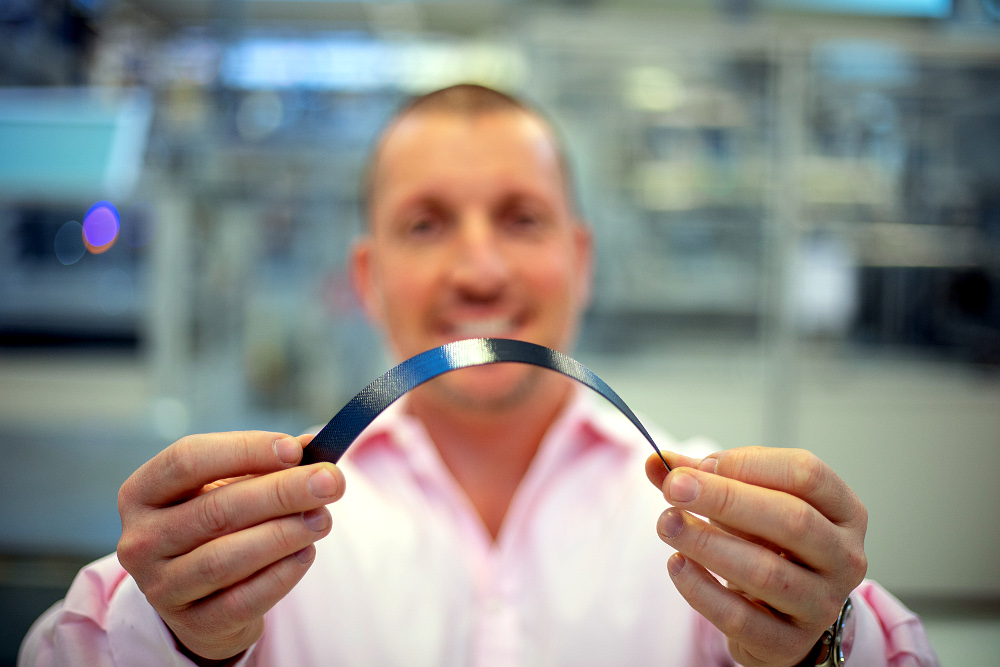 To kick off, Exeger has started working with companies such as US headphones manufacturer JBL, to embed Powerfoyle into the products. It has also teamed up with POC — a company that makes wearable safety equipment such as cycling and snowboarding helmets — seamlessly applying the solar material into smart helmets to enhance safety by protecting users before, during and after an accident.

Fili says it has taken ten years to refine Powerfoyle into what it is today.

“When we first began, I told Henrik [the company’s CTO, Dr. Henrik Lindström] that I only wanted him to create something that would serve a real purpose to consumers — something that is useful, and can contribute to lessening the damage and strain we are putting on the environment due to charging personal electronics. In those ten years, we have developed — from start to finish — a unique piece of technology that has near-endless applications.”

So, what does he mean by “near-endless”? What is it about Powerfoyle that is so exciting? Well, in a market struggling to get a grip on the mountain of e-waste that continues to build as batteries die and electronic gadgets are thrown away, Powerfoyle has a big role to play. The cells work similarly to the way that plants photosynthesize; absorbing light in many different conditions and using that energy to generate fuel — in this case, electricity.

Powerfoyle cells can be applied to any ‘dumb’ or ‘passive’ surface, rendering it ‘smart’ — and thus serving many more purposes for the consumer. When applied to consumer electronics — such as headphones, tablets and e-readers — the material enables them to self-charge, even when being used in ambient light.

“Imagine a world where your street signs, lights, speakers are all powered by a material that doesn’t have to rely on sunny weather or plugging them into a wall or computer, in order for them to work,” Fili says excitedly.

What usually happens is that electronic products get thrown away or left in a drawer, never to be used again. Products integrated with Powerfoyle, to date, have either aged, broken or have aged faster than the Powerfoyle — which prolongs the battery life by reducing and avoiding the aging process of full battery charge cycles.

“The ambition has remained the same from our initial idea; putting consumer electronics which have near-endless battery life, into the hands of the masses,” Fili says. “No charging — just complete, untethered living without having to worry about plugging in.”

It’s a bold ambition; but with some good partners already on board, the future is bright. The JBL Eternal headphones, featuring Powerfoyle, were due to launch this October, but COVID-19 has delayed things. The partnership with POC will come to fruition at the end of the year. Softbank and Samsung have also confirmed interest in making use of Exeger’s innovations.

“We’re on a mission to restore the carbon balance of the planet by freeing people from the requirement to recharge their tech products — a process which creates a significant, yet typically overlooked, burden on the planet’s resources.”