Can frustration over a broken toaster and a balky vacuum, exacerbated by the sleeplessness that goes with mothering a newborn, catalyze the scaling up of a circular economy for consumer products?

Can the results be — in addition to longer lives for the toaster and vacuum — reduced global greenhouse gas (GHG) emissions and a more equitable economy?

If Sandra Goldmark — Director of Sustainability and Associate Professor of Professional Practice in the theatre department at NYC’s Barnard College, and the owner of the defective appliances — has anything to say about it, the answers will be resounding yeses.

To Goldmark, a circular economy (i.e. consumption of goods that generate zero or little waste, with reuse and repurposing of products becoming the norm) will be “beautiful, sustainable and accessible.”

Her vision for this is on display until June 28 at Good Stuff, a vibrant pop-up installation in Lower Manhattan’s Seaport District that features a plethora of, well, good stuff:

Of course, Good Stuff would not exist without the aforementioned broken appliances.

“It was Spring of 2013,” Goldmark recalled. “I was home on maternity leave with my second son. I couldn’t sleep. And my stuff was breaking all at the same time, it seemed: the toaster, the vacuum and more. I could’ve afforded new stuff but I wanted mine to work! And I didn’t want to propagate the global system of linear consumption — extract, consume, discard — that is creating lasting environmental and social damage. Most importantly, I wanted my kids to grow up in a world that would be less threatened by the negative impacts of manufacturing of tons of new, unnecessary stuff all over the world, which all too quickly becomes trash — to the tune of 150 million tons of landfill annually in the US alone.”

Once she could get her baby to nod off, Goldmark still couldn’t sleep. So, she kept thinking about fixing lamps, vacuums and whatnot. This is not surprising when one considers that the Yale Drama School MFA worked for years as an environmentally minded theatrical set designer in New York. She had gotten sick and tired of filling dumpster after dumpster with stuff, some of which could have been reused or repurposed.

Goldmark’s insomnia — along with some funding from Indiegogo and a small research grant from Barnard — led to the birth of Fixup, a pop-up repair shop launched with her husband, Michael Banta. The shop opened for the month of June 2013 in her northern Manhattan neighborhood of Inwood, in an empty storefront that had been a pharmacy.

Fixup was an immediate hit: In that one month, Goldmark, Banta and others fixed 500 items, from lamps, jewelry and ceramics to small furniture and more — and the press followed.

“Michael and I were interviewed on MSNBC after our first Fixup, as exemplars of a nascent ‘Stuff Movement’,” Goldmark marveled. “I did a TEDx talk in 2014. A potential investor got in touch and asked, ‘What would you do with a million dollars?’ I didn’t have a great answer at that time — I was just running this one tiny, experimental shop — but I saw there could be potential on a big scale for new revenue models that include reuse, repair and maintenance.”

Christmas 2013 saw Goldmark and Banta run a more ship-shape Fixup. They raised prices a bit, which allowed them to pay their workers $20 per hour. Business was good and Fixup’s small profit was earmarked to fund the next one. Between 2014 and 2018, Fixup ran two to three month-long pop-ups each year.

The thing is, Goldmark has far bigger ambitions. She wants to play a role in scrapping the core, linear-consumption-oriented business model that has dominated the world since the Industrial Revolution. In its place would be a scaled-up circular economy.

Good Stuff serves as Goldmark’s next step: “It came to my mind last fall. I thought we needed to go beyond repair — to connect the dots on the full cycle of consumption. So, I thought about a venue that would also be suitable to offer good used and upcycled stuff. Good new products, made to last longer and formatted for reuse, would also be welcomed.” 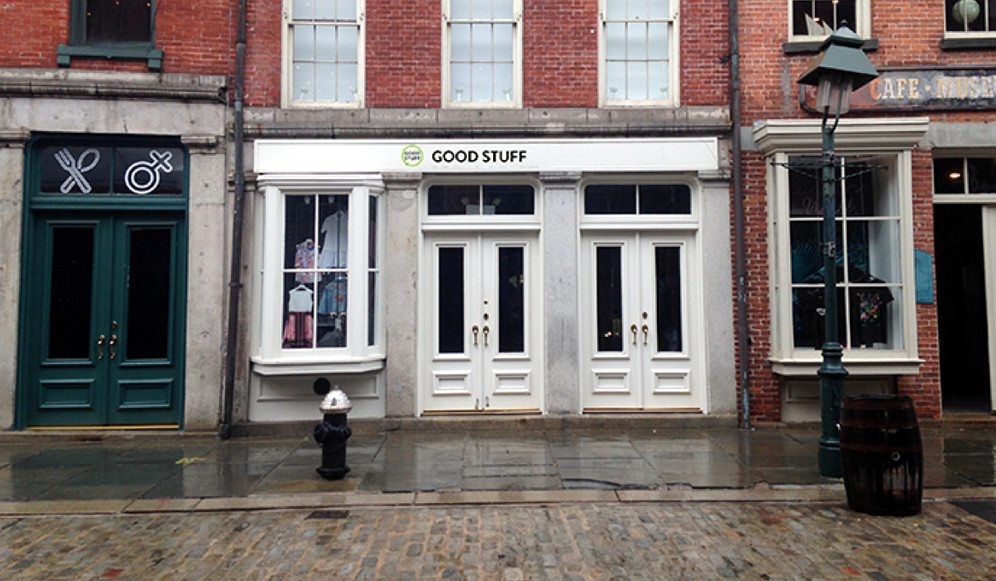 Goldmark sprang into action. A vacant 2,200-square-foot, two-story space on the heavily foot-trafficked Front Street in the heart of Seaport was secured in February.

Knowing that Good Stuff would be a much bigger undertaking than Fixup and that the space would have to dazzle — in a vintage, lived-in, yet welcoming way — Goldmark sought out partners. Lauren Fay, founder and Executive Director of the New Fashion Initiative, runs her nonprofit to bring awareness about the environmental impact of fashion. When Goldmark approached her with the initial idea, she quickly signed on to co-host the event and develop Good Stuff programming, partnerships and marketing. And like-minded partner brands including Pact, Made in NY Fashion, The Renewal Workshop, Closed Loop Ventures, REI, Make Fashion Circular and Remade in Brooklyn came on board.

The homey vibe Goldmark and Fay were going for was apparent from the moment I entered Good Stuff on its opening Friday night.

Living room and dining room set-ups in the front offered a warm welcome to curious passersby. Shoppers rifled through racks filled with an eclectic selection of Good New and Good Used clothes. The repair shop in the back was being readied for an upcoming workshop.

The evening concluded with a thought-provoking panel discussion, “Redefining growth, or what is the circular economy really all about.” It was packed with 40-50 people, all ready to jump start a circular economy.

The key question is, how do we turn those 40- 50 people into 4,000,000-5,000,000. And that multiplication has to happen quickly: According to the IPCC's 2018 report, humanity has about 12 years to decarbonize by 45 percent if we are to avoid the most calamitous effects of climate change.

Goldmark has long believed “big box” retailers — key facilitators of our stuff problems — need to be big parts of the solutions.

“Back in 2012, I told Michael that Walmart should have a repair shop in every store. Fast-forward to today and you see IKEA management saying that the West has reached ‘peak stuff.’ These big brands are starting to work on these issues. The questions are: What will they do about it, and when?”

In the meantime, Goldmark’s team will figure out what worked at Good Stuff and what didn’t — and then, they will decide how to do it better and much bigger.

To find out more about Good Stuff, including when you can stop by, please visit http://goodstuff.nyc.

WASTE NOT
E-Waste No More: Fairphone and Framework Show a Better Way Forward for Personal Electronics

THE NEXT ECONOMY
Can Regenerative Agriculture Regenerate the US Food System?