Mark McElroy
Published 4 years ago. About a 10 minute read.

At the closing of the New Metrics '17 conference in Philadelphia last month, attendees were asked: “What ‘New Metric’ will you go back and implement in 2017/2018?” The overriding response tabulated in real time and displayed on the big screen in a word cloud (above) was “context based,” meaning Context-Based Sustainability (CBS) and its corresponding context-based metrics.

For anyone seriously interested in experimenting with CBS in their own organization, here’s a three-step process I recommend you follow:

In general, CBS should be tested and evaluated in the form of small pilots. In practice, this will tend to take the form of identifying a small number of AOIs — such as greenhouse gas emissions, living wages, solid waste, product safety, workplace safety or what have you — all depending on the results of the materiality analysis performed in step 1, and also in accordance with data sources that may or may not already be available.

A CBS pilot, therefore, might only consist of an attempt to address, say, three AOIs and to specify and implement their corresponding context-based metrics. That said, a good materiality analysis will also result in the identification of all or most AOIs of relevance to an organization, which in my experience rarely exceeds 20 in number. Pilot-related choices can then be made from among them, while leaving the big picture still fully in view as to what the remaining scope of implementation would be in order to finish the job later on.

Here’s a summary of what each of the three steps identified above will involve:

Now, let’s unpack this. In CBS, what must be measured, managed and reported is an organization’s sustainability performance in terms of its impacts on vital resources or capitals; but only for resources or capitals that people rely on for their well-being. This can either be a result of impacts an organization is already having or because of impacts it ought to be having given the relationships it has with others (through contracts, agreements or under the law).

Whenever these conditions are met, an impact can be said to be material. For example, greenhouse gas emissions are material for most organizations because they have an impact on a resource (a natural one) that everyone relies on for their well-being (the climate system on Earth). Everyone on Earth, therefore, is a stakeholder for organizations that emit GHGs.

An organization might also choose to take the position that it is obliged to pay its employees at least a living wage (an economic resource). In that case, wages would be a material AOI and the organization’s employees, in turn, would be a stakeholder group to whom a duty or obligation is owed to pay a living wage.

Another case might be product safety. Since products are resources (material or constructed ones) that people rely on for their well-being, product safety, too, is a material AOI that should be included in a well-defined CBS program. Any impact you have, or are duty-bound to have, on a resource that others rely on for their well-being is material.

Once all of the material AOIs have been identified, they should be assembled or aggregated within a MultiCapital Scorecard (MCS), which is a context-based triple bottom line measurement and reporting system (see Figure 1). The MCS is an open-source performance accounting tool, so why not use it? 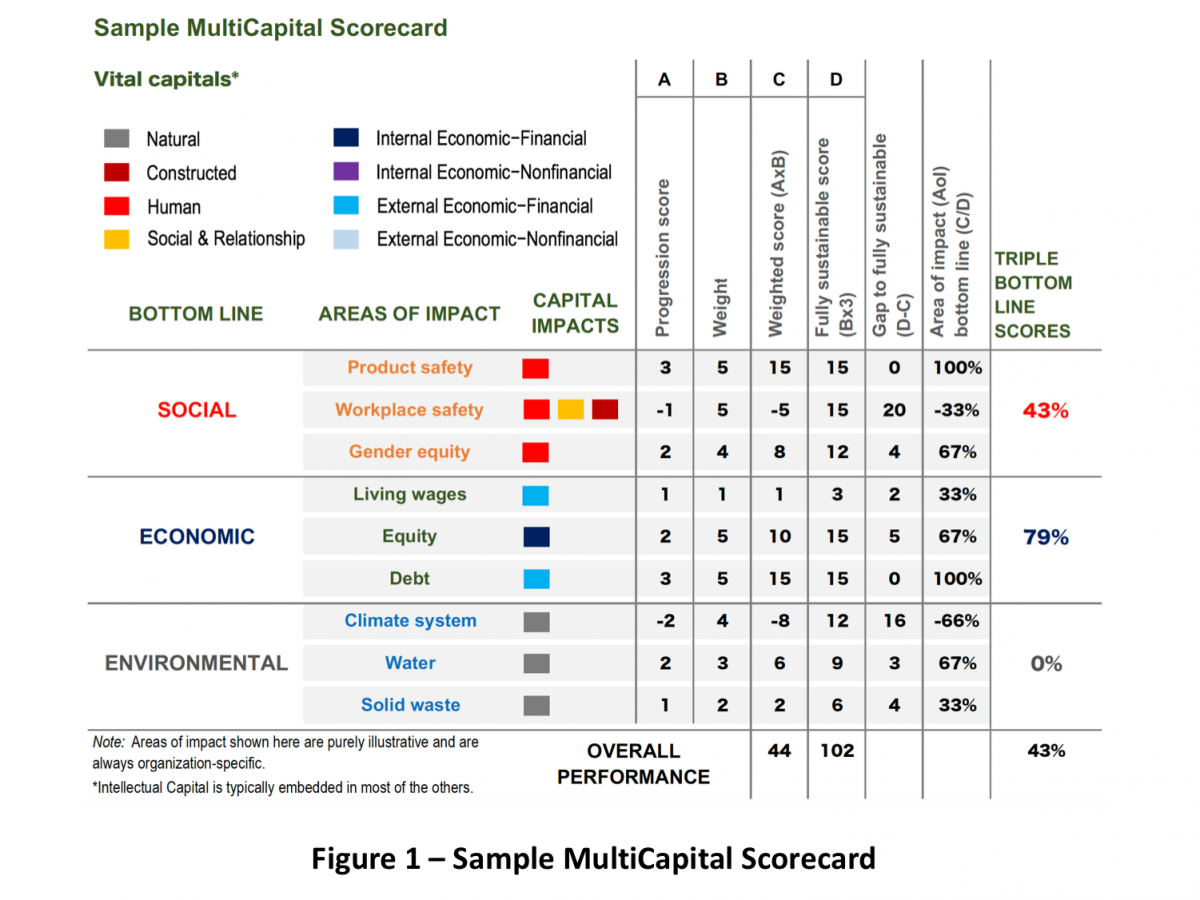 2. Choose one or more material areas of impact (AOIs) for implementation in a CBS pilot, along with their associated context-based metrics

Once a material set of AOIs has been identified in step 1, a choice must be made as to which one(s) should be used in the pilot. Step 2 is also where associated context-based metrics are defined. Again, let’s unpack this.

First, the scope of the pilot should be defined in terms of an organizational unit of analysis for which data for the AOI(s) of interest is readily available for at least three consecutive and recent years. Indeed, it may be the case that data is already being collected in the AOI(s) of interest, such as is often the case for many environmental areas of impact (GHGs, water, waste, etc.). But it should also be the case that the corresponding organizational domain is not too complex or far-flung geographically, because after all we’re only doing a pilot.

So, let’s stick with the three sample AOIs mentioned above: GHG emissions, wages and product safety. Each of them would require that at least one context-based metric be developed and/or chosen from preexisting sources.

In the case of context-based GHG or carbon metrics, there is more than one such metric available from alternate sources, including one we developed ourselves back in 2006 with Ben & Jerry’s: CSOs Context-Based Carbon Metric. The sustainability thresholds featured in this metric are science-based and reflect the latest thinking on what GHG reductions over time need to be in order to avoid temperature increases above 1.5 degrees Celsius over pre-industrial levels. Like the MCS itself, this metric is also a freely available, open-source offering, so why not use it?

A context-based living wage metric would also be needed. In that case, the performance standard or threshold would simply need to be a compensation level determined to be locally or regionally sufficient to meet basic needs. This would have to be researched and then built into a metric as a denominator in order to express a minimally sufficient (not-to-fall-below) level of compensation that should be paid to all employees.

A context-based product safety metric might be next, in which case a standard or threshold for safety would have to be defined. That could either take the form of a physical or functional property of a product itself, or of safety incidents or records associated with its use. The latter might be a proxy measure, which unlike a direct measure of the product itself would be an indirect indicator of the thing we’re interested in — safety, in this case.

Last in step 2 would be to specify a data collection protocol, which is a people, process and technology system for collecting data on an ongoing basis, or at least in terms of what it will take to perform the pilot. Longer term, however, if the CBS implementation goes forward, a more permanent protocol will need to be defined and operationalized in order to continuously collect data on some predetermined frequency.

3. Implement, test and evaluate the metrics developed in step 2

Last comes step 3, in which the context-based metrics and partially populated MCS scorecard are deployed. For piloting purposes, data for at least three recent (and consecutive) years should be available; although for some metrics, like most context-based GHG or carbon metrics, data for even more years may be needed. This is because the science-based standards embedded in such metrics are predicated on what emissions were in an earlier baseline year (such as 2010), in which case emissions for that year and every year thereafter will also be needed in order to specify standards for the more recent years of interest.

Performance scoring and reporting in CBS happens at two levels. First, each metric, when populated with impact measures in the numerator and threshold standards in the denominator, will result in a score that is either less than, equal to, or greater than 1.0 when the quotient is computed. For GHG emissions (and other impacts on natural capitals), any score of less than or equal to 1.0 signifies sustainable performance (or science-compliant in the case of context-based carbon metrics); greater than 1.0 is unsustainable. For impacts on social and economic resources (or capitals), the scoring logic reverses because the norm is to continuously produce the resources involved (i.e., greater than or equal to 1.0 is sustainable; less than 1.0 is not).

The second level of scoring is baked into the MultiCapital Scorecard itself. Performance there is reported in terms of what we call “progression performance,” which indicates (a) whether or not the sustainability thresholds or standards defined for each AOI are being met, and (b) if not, whether performance is moving towards or away from the target and for how long. In effect, the scoring schema used by the MCS is a kind of sustainability rating system. Scores received for individual metrics as explained above are themselves then rated by the MCS (i.e., we score the scores). That is how we are able to map all otherwise very different scores to a common sustainability performance scale.

Assuming performance data is gathered for, say, three years of activity, the result of the pilot will be to produce (1) context-based measures of performance for each AOI for each of the three years, and (2) three MultiCapital Scorecards, one for each year. That should provide plenty of fodder for purposes of testing and evaluating CBS in a pilot!

Assuming all goes well in a pilot, the next logical step would be to develop and deploy the remaining AOIs identified in step 1 and their corresponding metrics in step 2. This can proceed at the organization’s own pace and also with respect to additional groups or operating units within the organization, again at its own pace.

One thing that should not be lost on any of us here is that CBS provides a much more meaningful and superior form of sustainability accounting than most of what passes for mainstream practice in business. Indeed, that is why we do it, and that is what it does for us. How so?

CBS is a superior form of sustainability accounting precisely because it takes contextually relevant social, economic and environmental factors explicitly into account. It is impacts that do not contravene the thresholds involved that we can say are sustainable, not ones that violate them. And whereas CBS attends to all of that, context-free measures do not.

I encourage practitioners interested in learning more about CBS and the tools and metrics involved to visit the following websites for more information: the Center for Sustainable Organizations and the MultiCapital Scorecard. There you will find a host of freely downloadable, open-source materials on all of this and more. Happy piloting!