Mark McElroy
Published 7 years ago. About a 6 minute read.

As the importance of measurement and reporting in sustainability continues to grow, it should be helpful, I think, to clarify the distinction between so-called science- and context-based metrics. These terms are not synonymous, although they do overlap. More important is the fact that science-based thinking is by no means sufficient for purposes of setting goals or measuring performance in organizational sustainability — necessary, perhaps, but insufficient.

As the importance of measurement and reporting in sustainability continues to grow, it should be helpful, I think, to clarify the distinction between so-called science- and context-based metrics. These terms are not synonymous, although they do overlap. More important is the fact that science-based thinking is by no means sufficient for purposes of setting goals or measuring performance in organizational sustainability — necessary, perhaps, but insufficient.

To really understand the difference between science- and context-based measurement, one must first understand the difference between thresholds and allocations. A threshold is a limit in the carrying capacity of a vital capital, which can either be an upper limit or a lower limit. A threshold of water in a watershed, for example, is an upper limit; a livable wage threshold is a lower limit. Both are thresholds that must be respected if an organization’s impacts on the resources involved (water and wages) are to be sustainable. Thresholds, then, are measures of the stocks and flows of vital capitals: measures of their limits or sufficiency, that is.

Allocations, by contrast, are fair, just and proportionate shares of the burdens required to maintain thresholds (in vital capitals) that are assignable to individual actors (e.g., organizations). Once limits in the availability of water resources in a watershed have been determined, for example, allocations of them can be made to individual users. In the case of water, this will typically involve allocations to multiple parties, the sum of which should not exceed the available upper limit (or threshold) of renewable supplies. In the case of livable wages, allocations are typically made to a single party (i.e., an employer). Some thresholds, then, are shared, others are exclusively held. In either case, allocations must be made on a fair, just and proportionate basis before goals can be defined, against which performance can then be measured in meaningful ways.

One common way of making allocations is to do so proportionately to an organization’s contributions to GDP. Practitioners have had good success with this method in the case of water use and greenhouse gas emissions (GHGs). The same allocation technique, that is, can be used to make allocations for more than one type of impact. Other allocation methods include making assignments on a per capita basis (i.e., per the headcount size of an organization) or by reference to how much of an industry’s output is attributable to any one company.

Science-based goals and metrics, then, are by themselves insufficient for purposes of setting targets or assessing performance at the level of individual organizations. In order to be useful, such measures must be expressed in terms of organization-specific allocations, such that thresholds in the availability of, or burden to produce, vital resources can be fairly apportioned to individual actors. And all of that, in turn, must be done in such a way as to adjust for changes in an organization’s size over time or for changes that occur in the number of other actors in the world. This is systems thinking at its best and nothing less will do.

By way of example, if a company sets a goal in 2005 of reducing its GHGs by 80 percent by 2050, and yet quadruples in size by then while the population on Earth has also grown, does managing to the 80 percent target set back in 2005 still make sense? Hardly. This, then, is what the allocation side of context-based thinking is designed to do — adjust for changes in the facts on the ground and acknowledge differences in accountability, even as we simultaneously attempt to abide by science-based thresholds. Context-based goals and metrics do that well; science-based measures by themselves do not.

Here it may be helpful to clarify what is meant by “science” in all of this. While it is true that most of what passes for mainstream practice in so-called science-based goal-setting and performance is biophysical in scope (e.g., water use, GHG emissions, biodiversity impacts, etc.), science is much broader than that and includes treatment of social and intangible constructs, as well. Indeed, the social sciences per se include economics, political science and sociology. Cognitive science, too, and psychology are scientific in ways that are applicable here.

That said, some thresholds or sustainability standards are not science-based at all and are perhaps better described as purely normative or ethics-based (i.e., expressive of duties or obligations organizations have to act with fairness, justice, integrity and respect). Respecting racial and gender equality come rushing to mind here. Such purely normative thresholds, however, are germane to sustainability performance and must also be taken into account. 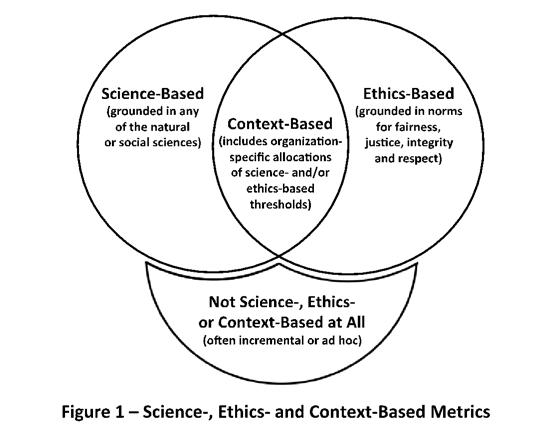 When taken together, we get something like the Venn diagram shown in Figure 1. Context-based metrics, as indicated, always bring allocations to the table and are otherwise science- and/or ethics-based. Only context-based measures, therefore, make it possible to set goals for, and assess performance against, organization-specific sustainability standards of performance. Neither science- nor ethics-based measures by themselves can do this. Norms, values and ethics are always required to finish the job.

Of course there are other metrics that are not science-, ethics- or context-based at all. Instead, they may be incremental or ad hoc only in form — calling for more of this or less of that this year than last, but never in terms of sustainability thresholds or allocations.

To close, here are some short definitions of the terms I have been using that may be helpful:

Examples of all three categories are shown below in Figure 2. 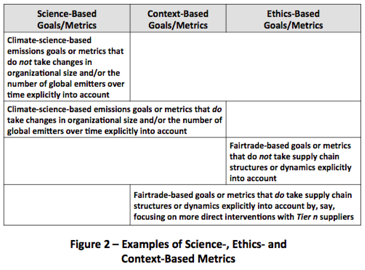 Readers interested in learning more about context-based goal setting, metrics or Context-Based Sustainability in general can click here for that.

Note: Special thanks go to Andrew Winston, Jeff Gowdy and Bill Baue for their contributions to my own thinking on these issues, including our rigorous debate last year in the run-up to Sustainable Brands’ New Metrics ’14 event in Cambridge, MA. Thanks to you all for that!