Mark McElroy
Published 7 years ago. About a 6 minute read.

In part 1, the Center for Sustainable Organizations’ Mark McElroy provided a refresher on the thinking behind context-based sustainability (CBS) and materiality. Here, he elaborates on ways companies can define and use materiality for themselves.

One of the more profound ironies of the IIRC’s efforts has been the extent to which it has bent over backwards to distance itself from sustainability per se (the word appears only three times in its 15,000+ word Framework), even as it is ostensibly leading the charge in terms of how best to measure and report it. What I am talking about here is the degree to which the IIRC has openly embraced capital theory — or Multicapitalism, if you will — as a basis for developing integrated reports.

Indeed, capital theory plays a prominent role in context-based sustainability, not to mention sustainability theory and practice in general, as evidenced by its persistent presence in the sustainability literature for decades now. If it was in fact the IIRC’s intent to distance itself from sustainability, they sure picked a funny way of doing it. More than any other standard, the Framework displays the deepest and most explicit commitment to capital theory as a basis for assessing the performance of an organization, the essence of which has become the dominant theory on how best to measure and report sustainability performance in particular.

One could say, then, that the IIRC standard, by strongly advocating for the application of Multicapitalism to integrated measurement and reporting, has in fact produced the most sophisticated and advanced sustainability reporting standard extant, despite its primary allegiance to shareholder primacy and its aversion to sustainability. For the IIRC, sustainability reporting is something that happens somewhere else (presumably in GRI-type reports), the contents of which simply need to be imported in some way into the scope of -compliant integrated reports, all in the narrow service of shareholder value. If that is in fact the IIRC view of things, then all I can say is that despite their intentions to the contrary, they have inadvertently created the world’s best sustainability reporting standard: a capital-based one.

With the foregoing as background, the CBS interpretation of materiality is as follows:

Materiality is determined by whom an organization’s stakeholders are and what its associated impacts on vital capitals are, or ought to be, of importance to their well-being.

Stakeholders, in turn, are defined as:

Anyone to whom an organization owes a duty or obligation to manage their impacts on vital capitals in some way and whose well-being (at least in part) depends on it.

By this interpretation of materiality, an organization’s of impacts on, say, local water resources would be deemed material solely because of the fact that others (nearby community members) rely on the same resources for their well-being. By contrast, under the FASB-type interpretation, such impacts on water resources might not be seen as material. And until such time as social or environmental impacts of any kind become pressing enough to put financial capital or shareholder well-being at risk, SASB and the IIRC would have us treat them as immaterial. That’s a pretty shallow and arbitrary interpretation of materiality if you ask me, not to mention one that would seem to invite risk, not avoid it.

Indeed, if it is possible to fully comply with a materiality doctrine and yet still be concealing impacts on vital capitals that stakeholders rely on for their well-being, then the doctrine itself is demonstrably unfit for the task and should be rightly rejected. From where I sit, that is precisely the case with the narrow FASB-type interpretations of materiality found in the SASB and IIRC standards, and that is why they should be discarded in favor of the broader GRI and CBS alternatives I refer to above.

To help illustrate what a full capital- and context-based implementation of the Framework might look like of a sort that also puts the broad GRI- and CBS-type interpretation of materiality into practice, I and an ex-Unilever finance exec in the UK, Martin Thomas, have created a measurement and reporting system that we call the MultiCapital Scorecard™ (MCS). To be clear, the MCS is a context-based integrated measurement and reporting system that is grounded in the same capital theory basis of the Framework, but which unlike the IIRC standard is not shareholder-centric. Rather, it is stakeholder-centric and because of that arguably goes beyond the letter of the standard when it comes to determining materiality.

The procedure for putting the MCS into use can be quickly summarized as follows: 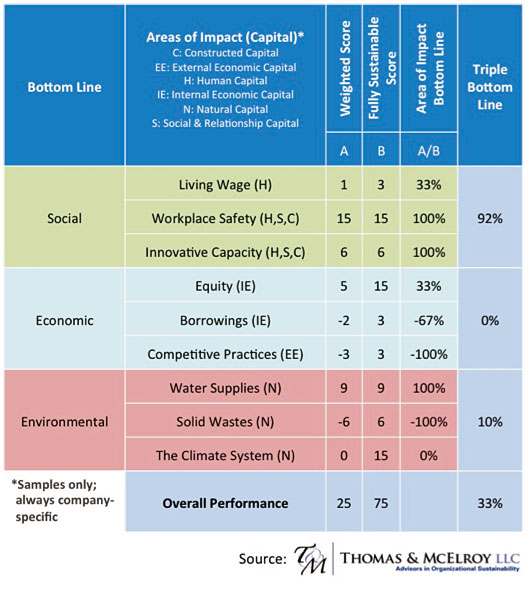 This, to our minds, is authentic integrated reporting; much more than simply aggregated numbers from other reports, and instead consists of reporting performance in accordance with a unified theory of performance — a capital-based one — in which performance of all kinds is expressed in terms of impacts on vital capitals relative to norms for what they would have to be in order to be sustainable. No other system does this.

What conclusions can we draw from this? First, all attempts on the part of SASB, IIRC and others to force fit a materiality standard that was never designed for broad application to a wide range of non-financial impacts are deeply misguided. They frankly amount to little more than the latest attempt on the part of the shareholder primacy doctrine to stay relevant, when in fact we’d all be better off without it. Nothing wrong with shareholder primacy, except of course when it no longer works.

Materiality and integrated reporting both, then, must be approached from a broader, capital-, context- and stakeholder-based perspective, which is what the CBS doctrine has been advocating for years. Both must be thought of in terms of what an organization’s impacts on vital capitals are or ought to be, and who its stakeholders are that depend on them. Once this has been done, an integrated system such as the MultiCapital Scorecard™ can finally be used to answer the question that every organization should be asking: Are we sustainable?

WALKING THE TALK
Target Unveils Plan to Co-Create an Equitable, Sustainable Future for All

ORGANIZATIONAL CHANGE
All Aboard: Cox Enterprises on the Cumulative Power of Buy-In