With goals to achieve carbon-neutral factories by 2030, to reduce CO2 emissions in its supply chain, combat deforestation and step up its efforts to tackle littering, PMI is working to reduce its environmental impacts, end to end.

For Philip Morris International (PMI) to speak credibly about sustainability, it had to start by addressing the negative health impacts of its products, whilst playing its part in addressing the global climate crisis. In 2016, the company set a new course by committing to replace cigarettes with smoke-free products as quickly as possible.

Though PMI has been working for many years to make its business more sustainable, the fundamental transformation of its business model has brought with it new opportunities to address sustainability challenges across its value chain and to add value to society. By laying the foundations for a smoke-free future, PMI has been able to take a more comprehensive approach to sustainability — both within its factory limits and beyond them.

The reduction of PMI’s environmental footprint is a core pillar of its sustainability strategy, outlined in its 2018 Sustainability Report. By developing and commercializing better alternatives to cigarettes while managing its environmental and social impacts across its operations and value chain, PMI has steadily been working to turn its vision, step by step, into reality.

Across PMI’s value chain, which spans the supply of tobacco and other materials, and the production, packaging and end-of-life of its products, PMI achieved a 34 percent reduction of its greenhouse gas emissions in 2018, against its target to reduce its absolute CO2 emissions by 40 percent by 2030 — earning it a place, for the fifth consecutive year, on CDP’s Climate A List.

Earlier this year, PMI also became the first company to be accepted into Sustainable Brands’ new SB Voyager program, which enables companies that have a publicly stated commitment to transform controversial business models for the better to actively engage with SB Corporate Members in regular meetings and online. 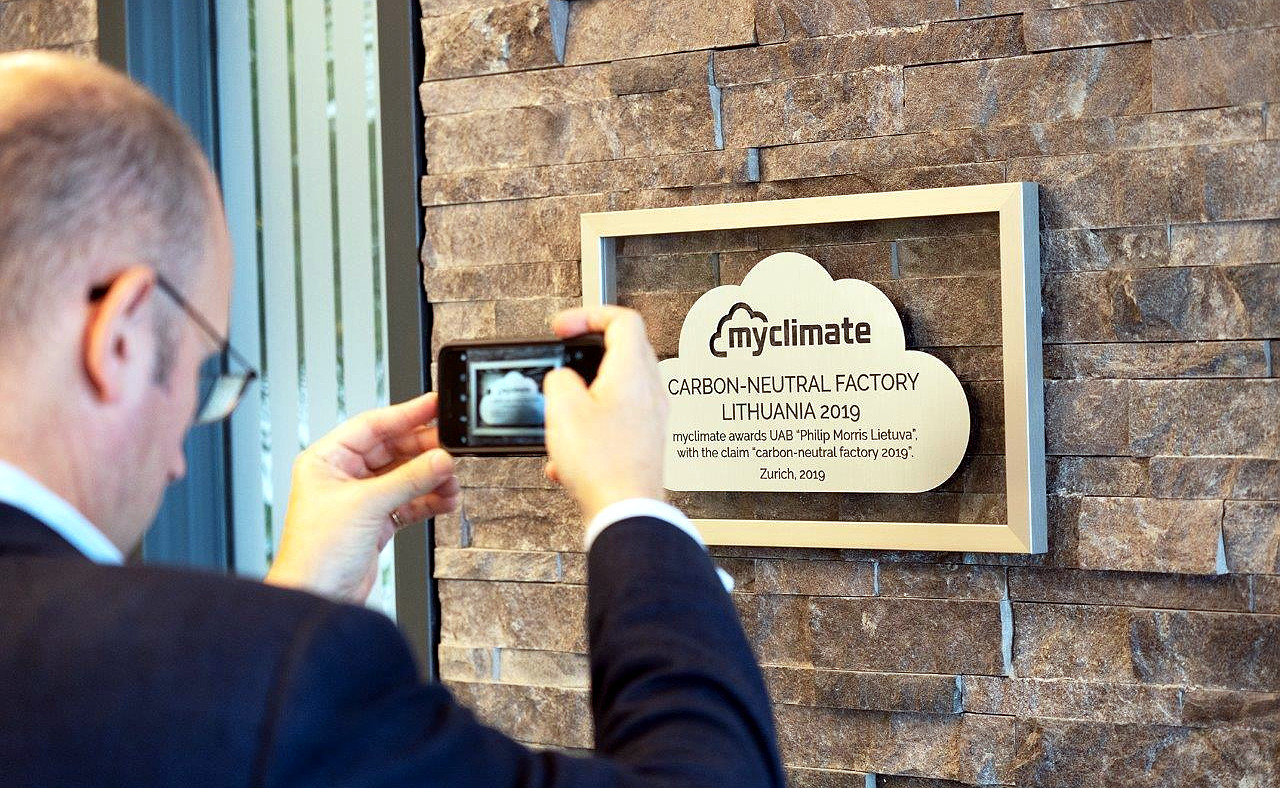 Demonstrating its progress toward ensuring all of its factories are carbon neutral by 2030, PMI’s factory in Klaipėda, Lithuania, has become the first to be certified to be carbon neutral by the Swiss nonprofit environmental organization myclimate.

At its Klaipeda factory, PMI has implemented multiple projects over the past 10 years to optimize its energy usage and reduce carbon emissions. This includes upgrading utilities equipment, such as chillers and compressors; and facilitating heat recovery to optimize fuel usage for heating purposes, installing a biomass boiler, procuring certified renewable electricity and offsetting natural gas carbon emissions with biogas certificates. To offset the remaining carbon emissions, PMI invested in Gold Standard certificates from climate-protection initiatives that provide more than 9,000 families in India with domestic biogas for cooking, in replacement of kerosene and firewood, to reduce greenhouse gases and deforestation.

PMI plans to take similar measures to achieve carbon neutrality at all of its factories, focusing on energy efficiency, eliminating losses and switching to renewable energy. Acknowledging that the growth of PMI’s smoke-free business will make it increasingly challenging to reduce its global energy usage, it is also globally accelerating its switch from high-carbon or unsustainable fuels such as coal to sustainable wood sources and biomass products. It is also working with suppliers and farmers to reduce emissions and implement initiatives that focus on planting trees, setting up sustainably managed commercial wood lots and improving fuel efficiency at the barns used to flue-cure tobacco. 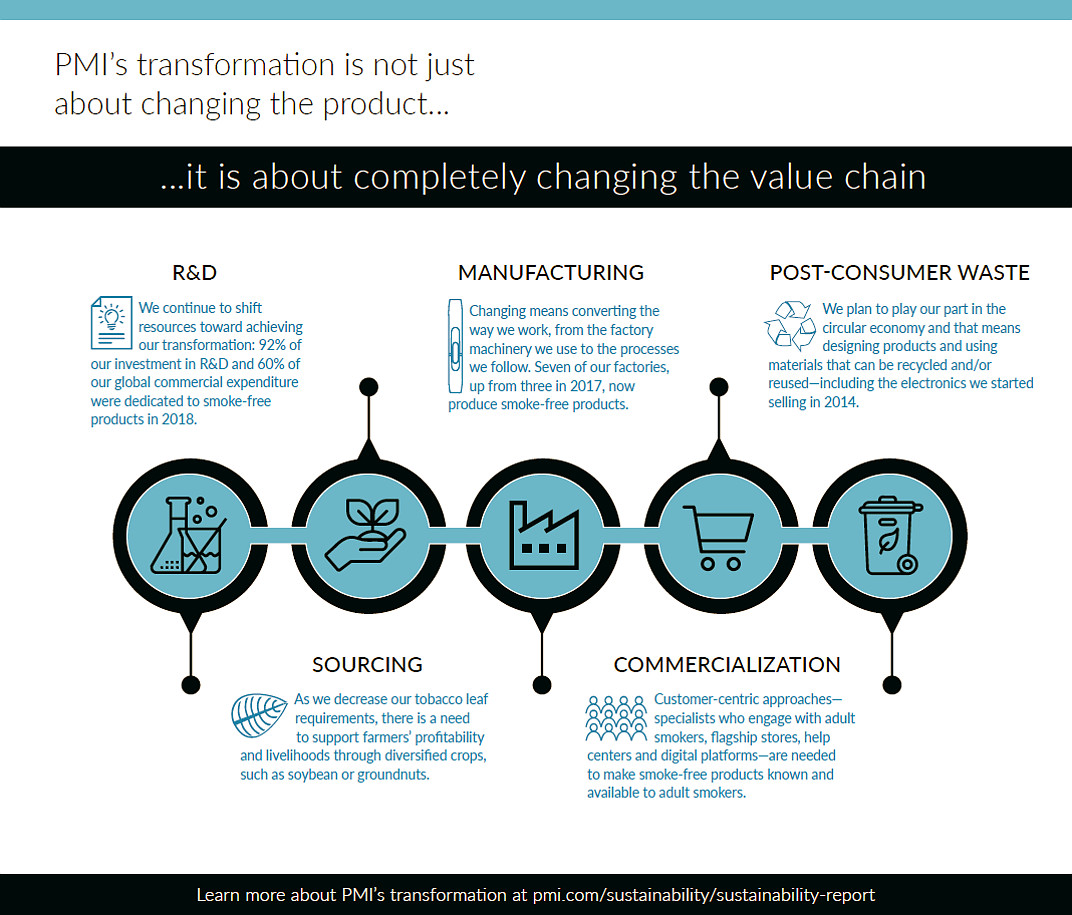 As part of PMI’s commitment to reduce its environmental footprint, the tobacco company is focused on several key areas across its value chain — including the sustainable management of waste and litter.

Cigarette butts remain among the most frequently littered items, and many people will continue smoking cigarettes in the near future. PMI’s view on this subject is clear: Smokers should not litter and should dispose of their cigarette butts responsibly.

The company is therefore taking a more systematic approach to the issue of littering, including analyzing the causes of littering and the drivers of behavior change. PMI has also been researching cigarette filters with higher degradability, and encouraging consumers to dispose of their cigarette butts responsibly through information campaigns and the distribution of portable ashtrays. In September, PMI employees across over 30 countries took part in clean-up activities in the streets and parks of their local communities to kick-start the global campaign and raise awareness about the issue.

Used heated tobacco units are significantly less likely to be littered than cigarette butts. They do not involve combustion, are not contaminated by smoke, do not need to be stubbed-out after use and have much less odor than combustible cigarette butts. As a result, consumers more readily keep used sticks for later disposal in the absence of appropriate infrastructure. They are also a better candidate for recycling and integration into a circular economy. PMI is exploring how such recycling schemes could be implemented effectively, while designing products and using materials with higher recyclability.

As part of its large-scale business transformation, PMI is driving action to ensure that water is managed sustainably and that the amount of water used per unit of cigarette or heated tobacco product is minimized. Its water strategy accounts for the risks it faces from water stress and pollution, their impacts — both in catchments relevant to operations and in supply chains — and drives action toward responsible use of water as a shared resource, taking into consideration the needs of local communities.

While water consumption in its manufacturing facilities only represents around 6 percent of the total water consumed across PMI’s value chain, the manufacture of heated tobacco units requires four to five times more water per unit than that of conventional cigarettes. As it increases its production capacity for smoke-free products, PMI is evolving its water strategy, with clean technology investments delivering water recycling.

PMI joined the Alliance for Water Stewardship (AWS) in 2017. In 2018, its Brazilian factory became the first manufacturing site in Latin America certified to the AWS standard. Five other PMI factories were certified in 2019 and the company is making good progress toward its goal of certifying all factories by 2025.

In 2018, PMI assessed global water risks in its tobacco supply chain and shared learnings and improvement measures with suppliers and farmers. Collective action to date has included watershed management and the development of drought-tolerant and flood-tolerant seed varieties; as well as access to water, sanitation and hygiene services for the farmers and their workers.

To learn more about PMI’s initiatives to reduce its carbon footprint across its operations and supply chain from its sustainability experts and key partners, register for the upcoming Sustainable Brands webinar, “Responding to the Climate Crisis: How PMI Is Reducing Its Carbon Footprint,” on Monday, December 16.

Sponsored Content / This article is sponsored by Philip Morris International.