Partnership is part of PepsiCo’s efforts to expand access to safe water globally, which has supported more than 22 million individuals in need since 2006.

PepsiCo, Inc. today announced that its partnership with the Inter-American Development Bank (IDB), the largest source of development financing in Latin America, has helped more than 765,000 people in rural areas of Mexico, Peru, Colombia and Honduras gain new or improved access to drinking water and sanitation services since 2011.

With grants to IDB in 2011 and 2016 totaling $7 million The PepsiCo Foundation, the company’s philanthropic arm, has helped catalyze $547 million in additional funding from others to support infrastructure investments and upgrades in these communities.

“One of the main areas of our partnership with The PepsiCo Foundation through the AquaFund focuses on bringing water and sanitation to rural communities in remote and dispersed areas, usually more difficult to reach,” said Sergio I. Campos G., IDB Water and Sanitation Division Chief. “Access to safe water and improved sanitation services has a positive impact on the health and overall wellbeing of these communities, unlocking their social and economic potential.”

As part of an effort to address this issue, PepsiCo made the first and only private sector investment in IDB’s Aquafund, a main financing mechanism to support water and sanitation investments in rural and displaced Latin America communities which receive less support for clean water projects than more densely populated areas.

The PepsiCo-funded pilots were highly effective, providing more than 765,000 people access to clean water in their communities primarily through the installation of water pumps and pipes. The pilot programs helped more than 485 households in 11 communities in Mexico and more than 3,700 students at 10 local schools in Colombia gain better access to drinking water and sanitation services. The successful pilots attracted additional support from international public sector partners, that provided funding to build new infrastructure, including pipe systems and treatments plants.

“At PepsiCo, we believe that access to safe water is a fundamental right – no matter where you live, no one should be left behind,” said Roberta Barbieri, Vice President, Global Sustainability at PepsiCo. “We’re working to make this right a reality by advancing community-based, self-sustaining water conservation and distribution programs in high-need areas across the globe—including through partnerships like PepsiCo’s with IDB that has raised half a billion of essential funding. Because of the catalytic nature of the potential impacts, public-private partnerships are one of the most effective ways to tackling the growing water crisis and provide critical support to communities in need.”

As part of its goal to expand access to safe water in some of the world’s most water-stressed communities, The PepsiCo Foundation is also working with WaterAid to bring clean water to more than 200,000 people living in communities in southern India facing extreme water shortages, specifically in Palakkad (Kerala), Nelamangala (Karnakata), and Sri City (Andhra Pradesh). With a $4.2 million investment, the partners are implementing solutions that include adding new wells, harvesting rainwater in schools and building piped water supply systems. To date, WaterAid has built 200 new water supply schemes, restored more than 130 pieces of existing infrastructure and organized more than 150 community hygiene promotion and water security learning sessions. The PepsiCo Foundation and WaterAid plan to bring similar solutions to other high-water-risk communities with the intention that increasing access to clean water will positively impact the health, security and employment opportunities of local residents, particularly women, who otherwise have to walk long distances to collect water.

PepsiCo has set a number of interconnected goals that aim to contribute to its Positive Water Impact, meaning its efforts and partnerships are designed to enable long-term, sustainable water security for its business and others who depend on water availability. As part of its Positive Water Impact strategy, PepsiCo is also dedicated to conserving and protecting fresh water and is supporting The Nature Conservancy’s work with farmers, landowners, businesses, and communities in the United States and Latin America to install efficient irrigation technology, protect upstream forests, and establish water funds that help replenish at-risk watersheds. In the United States, PepsiCo is helping replenish watersheds in Arizona, Arkansas, California, Colorado, North Carolina, Texas, and Utah. Through the partnership, water conservation projects in Colombia, Mexico, Brazil, Guatemala, and the Dominican Republic were implemented in 2018 with the goal to protect and restore water basins and to recover native ecosystems. This work has the potential to benefit 41 million people living and working in these crucial watersheds. In addition, PepsiCo is a founding member of the Greater Cape Town Water Fund in South Africa and has made the largest financial commitment to date in order to help bridge the gap between water supply and demand through nature-based solutions that will restore critical catchments in Western Cape. 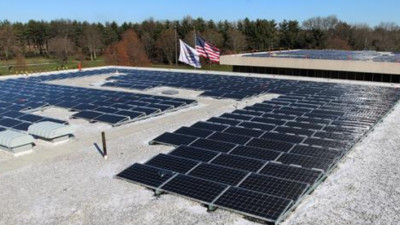 PRESS RELEASE
PepsiCo To Achieve 100% Renewable Electricity In The U.S.