Cambodian fashion brand tonlé is revolutionizing the textile industry not only with its ethical business model, but also a creative approach to zero waste: The company incorporates even its smallest scraps back into “yarn,” which is hand-woven back into new fabrics, creating unique and delicately woven garments perfect for shoppers who are conscientious about how their clothing is made.

We caught up with Rachel Faller, tonlé’s designer and founder, to learn more about the company’s motives and impact. 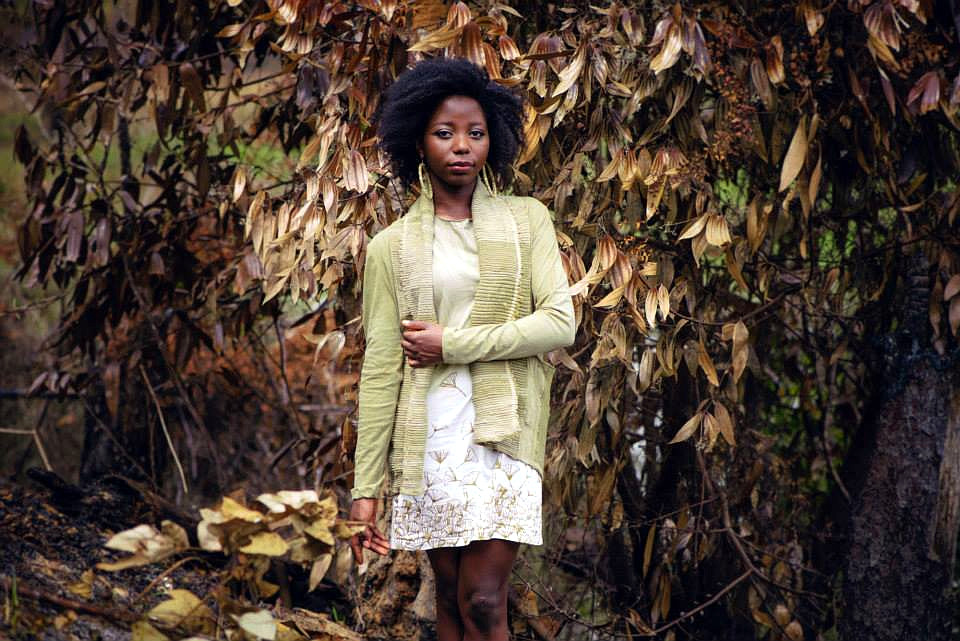 What does “sustainability” mean to tonlé?

Rachel Faller: Sustainability means, first and foremost, that we are building our business in such a way that it will last and that the jobs held by our staff will be secure and stable far into the future. We do not want to be a brand that literally “sells out” to investors’ whims or capitalizes off the latest trends and then fades with passing seasons. In order to create a sustainable business that does not depend on aid money and creates long-term job sustainability for our staff, we focus on creating a diversified range of high-quality fashion products that fit what the market demands, while not relying too heavily on trends. We have also developed several revenue streams in different markets to help ensure consistent sales throughout seasons and mitigating risk that might occur in different markets, rather than putting all our “eggs in one basket.”

Secondly, tonlé aims to create an environmentally sustainable product — meaning that our products do not create additional harm to the planet, as well as lessening previous impact by using waste created by others. The production of textiles conventionally creates a negative environmental impact by consuming non-renewable resources. For example, polyester, which accounts for 50 percent of the world’s textiles and is made from petroleum, takes a huge amount of energy to produce and also releases toxins when dumped or incinerated. At tonlé, we have painstakingly designed a process wherein we not only make use of pre-consumer waste created by other garment factories; we also use every single scrap of our own waste in a unique, closed-loop process where design and production are integrated. This means much less water, carbon and chemicals are used and textiles that would have otherwise ended up in a landfill or burn pile are being turned into beautiful, useful pieces of clothing. In short, by using a more conscious process, in 2014 tonlé’s production saved the following:

Zero waste probably seems like an impossible goal for many fashion brands. How did tonlé go about achieving this — was the framework laid out from the start or was it a gradual reduction process?

RF: This was not a goal that we aimed to achieve from the beginning but rather came through learning in the process of production. As tonlé’s designer and founder, I had started my previous brand with the aim of creating a business that was both environmentally and socially sustainable. I felt that it was impossible to have one without the other. While looking for the most eco-friendly materials available in Cambodia, I began to see the problem of vast amounts of waste generated by the garment industry. After doing some research I realized that the most eco-friendly fabric was not to use new fabric at all, but to use the waste that was already being created. As the company grew, I also became disturbed by the amount of our own waste that was being thrown away, leading me to design products using smaller and smaller scraps. Eventually, in 2014, when the company had been re-branded as tonlé, my team and I set a goal to use all of their scraps, eventually leading us to make paper with the tiny shreds of fabric threads that were left unused, leaving the entire production model with zero percent waste. It was a 5-year process to get here, and the company’s own production processes have developed around the goal of wasting as little material as possible. This is a foreign way to plan production to most companies, which typically look for the most economic way to lay out production rather than the most environmentally friendly.

The working environment for the team at tonlé seems to have a much more creative, community-like structure than the traditional assembly-line manufacturing methods typical of the textile industry. How much of a difference do you think this makes to both tonlé’s workers and the final products?

RF: It makes a big difference to both. There are factories where workers are treated well, receive good pay and work in healthy conditions - but really, who wants to work on the same button hole every day for 12 hours a day? We didn’t think these conditions inspired motivation, creativity or team spirit, and we wanted to create a working environment where team members are inspired to grow and challenge themselves, as well as interact positively with the people around them. We have purposefully set up our workshops not to resemble factories. Instead of assembly lines, our staff work in small teams where they work on a variety of different products and are able to try new skills, express themselves freely and contribute creatively.

Of course, there’s a reason why factories are set up the way they are — and as a result our production is never going to be as fast (or cheap) as a factory. But by producing in this way, we have much better staff retention rates (less than 5 percent attrition rate per year as compared to the national average of 20 percent in factories). Since our staff stay longer, they are more competent and less mistake-prone, so we have far fewer products failing quality control (one of the other factors that greatly contributes to the huge amount of waste generated by garment factories). Overall, our staff are healthier, happier and better at their jobs.

How does this make a difference in our final product? With the zero-waste production model that we employ, there is no way that we could use a traditional manufacturing model. Because the fabrics might be slightly different each time, staff must think on their feet, rather than just doing the same thing over and over again in auto-pilot. For example, in the cutting room, the team receives scraps of many shapes and sizes. They must identify which sizes of scrap can be used for what, and then sort the remaining waste into smaller pieces that can be used for other products. They also need to mix and match smaller scraps with like colors to be made into yarn which is later woven or knit. These small decisions must be made in every department. So, in the end, there is a small amount of variety in our products that you would never find in a factory producing in a traditional way. We think this makes our garments even more beautiful and unique. 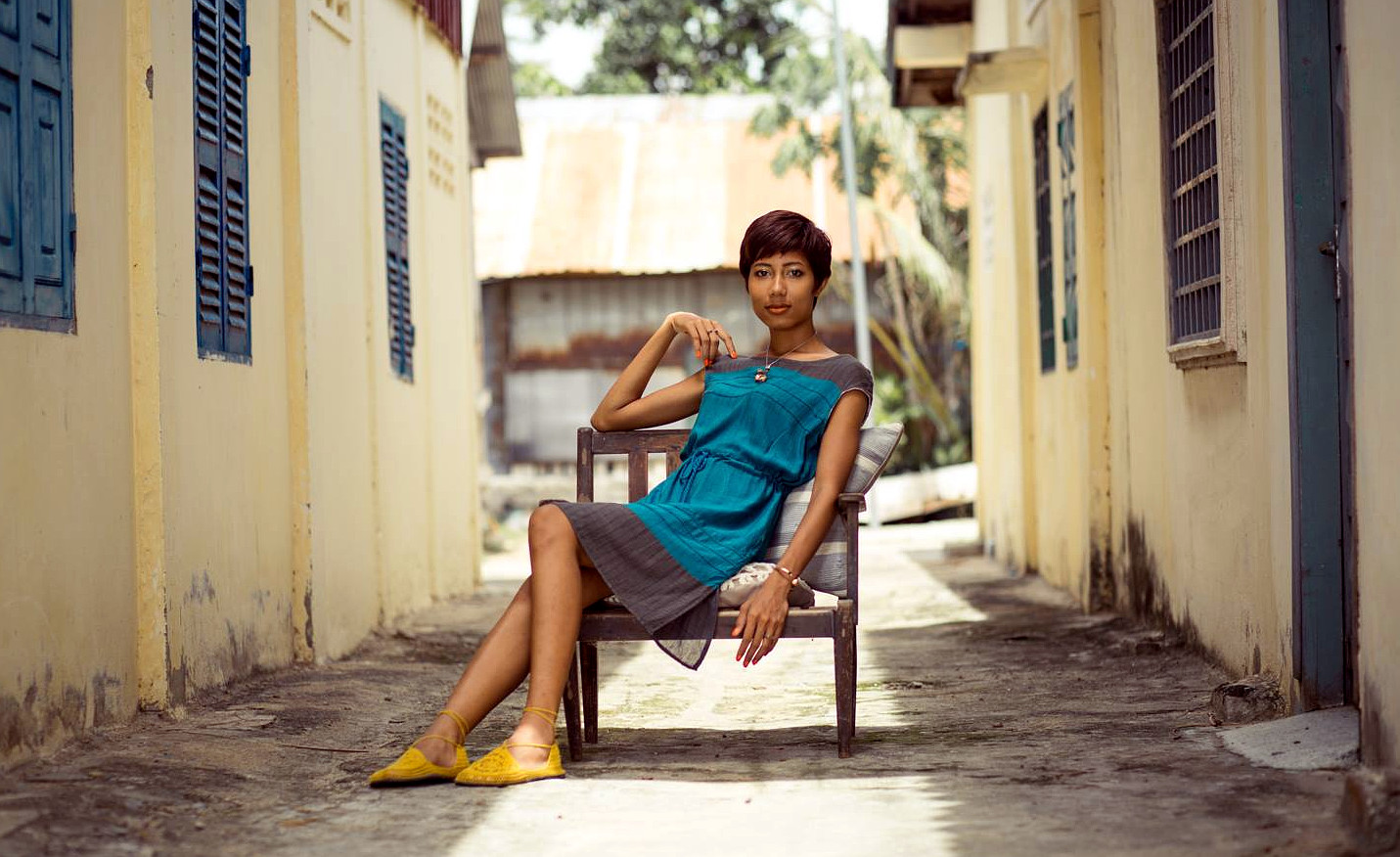 All of these unique waste-saving measures must be time-consuming and expensive. How does tonlé manage to make enough profit to not only stay afloat and maintain a large team of workers, but also earn enough to pay them well above the minimum living wage in Cambodia?

RF: Yes, it’s very expensive to produce in this way. The raw material (the “waste” left over from other factories) is cheap; but sorting, washing, processing and cutting the scrap fabric into all of these different shapes — to use in the way that we do — is time-consuming and that is where most of our money goes. Our business is one year old; we broke even in the first year, so have not yet made a profit, but we have been investing in the growth of the business. The path to profit will not be easy, because of the costs associated with doing business this way. But we have a lot of people (including our staff and our customers) who believe in the model and with the additional business growth that we have had, we believe we will make a decent profit this year.

One of the ways we have been able to keep our prices affordable while using these tedious methods of production is by not having too many “middle men.” Because tonlé owns its own production and retail channels, we are able to keep the whole process vertically integrated and keep the costs down. Often in fashion, it is the high markup each time the garment changes hands that actually makes the price high. At tonlé, we are committed to finding a way to keep our clothes affordable and that means finding our own sales channels rather than going through too many channels of distribution.

Your recent Kickstarter campaign raised more than double its initial $10,000 target. How is that going to be used?

RF: Part of the money has been used to produce the products for Kickstarter and ship them. With the remaining money we have used it to launch our online shop, pay for business setup costs in the US, and pay for some workshop improvements in Cambodia.

The market for ethical and sustainable goods is definitely growing, however it is still so small, accounting for only 1 percent of the total garment industry. We really need the average consumer to change their mind about how they purchase products in order to see big changes.

I think a big responsibility of the small brands like tonlé is to be advocates and get the message out there, so that people start thinking about how it is possible to do things differently; but ultimately major changes in the fashion industry will require large brands taking steps (even small steps can make a difference!) to change things. Consumers do have a lot of responsibility in this process and can make a difference (for example – Nike’s dramatic turnaround on its labor practices was largely as a result of public outcry). Right now, there is a lot of talk and buzz around the issues — which is great to see; but what is left to be seen is whether or not the public will continue to use their power to influence brands in this way.