Published 3 years ago. About a 4 minute read.
Image: Impossible Foods

The report also offers a first look at soon-to-be-published research that helps quantify the ways that plant-based diets can literally turn back the clock on climate change.

Impossible Foods, maker of the now famously indistinguishable Impossible™ Burger, today published its 2019 Impact Report. The annual report tells the story of the company’s progress in creating market-based environmental impact, achieving sustainability milestones through innovation in operations, and advancing the urgent agenda of dietary transformations. Impossible’s ultimate mission is to replace the need for animals as a global food-production technology by 2035. This report is an urgent call to action for readers — highlighting the cultural and research-driven awakening that is finally linking climate, biodiversity and food.

Impossible Foods is a major player in the growing global movement to embrace plant-based proteins — alongside companies such as Beyond Meat in the US, Max Burgers in Europe and Hong Kong’s Right Treat; NGO efforts such as WRI’s Cool Food Pledge and WWF’s Future 50 Foods report; and even new plant-based offerings from big-food players such as Nestlé. SB’s own #BrandsForGood collaboratory has identified eating more plants as one of nine key consumer behavior shifts that can drive the greatest impact toward a sustainable future — aka the “Good Life.” 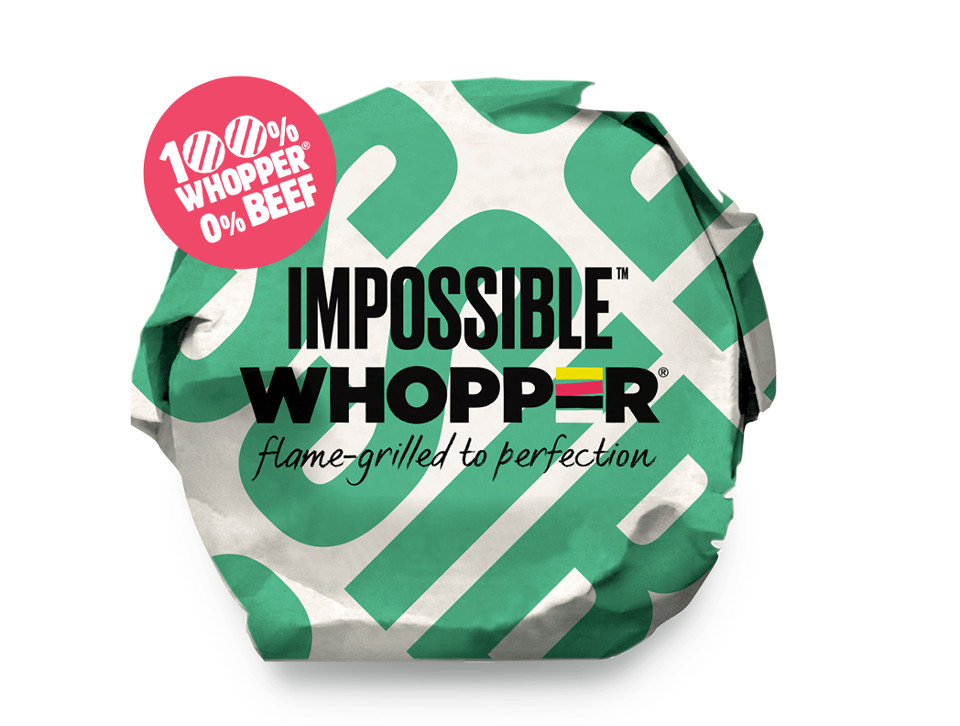 Impossible quickly amassed popularity and venture capital in the past few years by making meat directly from plants — with a much smaller environmental footprint than animal meat — as part of its mission to create wholesome and nutritious food, restore natural ecosystems and feed a growing population sustainably. The company kicked off 2019 with a product upgrade that, for all intents and purposes, delivered on its promise of replacing ground beef, and on a massive scale — the Impossible™ 2.0 recipe improved the sustainability and nutritional credentials of the product, while sparking soaring, taste-driven demand; and the Impossible Burger can now be found at more than 9,000 Burger King, Live Nation, Qdoba, Red Robin, Umami Burger and White Castle locations across the country — as well as Hong Kong, Singapore and Macau.

Impossible Foods was also recognized by the UN with its highest environmental honor: Along with fellow plant-based meat innovator, Beyond Meat, Impossible received the 2018 Champions of the Earth Award for its high-quality vegetarian meat alternatives, and its efforts to educate consumers about the environmental benefits of plant-based diets.

The Impact Report cites internal research to show how Impossible’s sales are translating into impact — empowering its meat-eating consumer base, 95 percent of whom are omnivores, to direct their palates towards more climate-beneficial and land-sparing “meat” options. The company asserts that if everyone who ate an Impossible Burger in 2018 chose it explicitly over a burger made from cows, we would have collectively spared greenhouse gas emissions equivalent to 250 million driving miles in a typical US car, a land area nearly the size of San Francisco and enough water to hydrate 3 million people for a year.

“The use of animals to produce food for human consumption has long been taken for granted as an indispensable part of the global food system,” said Impossible Foods’ CEO, chairman and founder Dr. Patrick O. Brown. “Yet, global demand for the foods that have, until now, been produced using animals continues to surge — and their catastrophic impact on climate, water resources, biodiversity and ecosystem integrity keeps skyrocketing. Awareness isn’t enough; we need urgent action.”

It begins with us

Iterating for success at Impossible Foods also involves introspection and self-measurement. The Impact Report notes its internal commitments to employees, consumers, communities and, of course, the health of the planet.

With the launch of Impossible Burger 2.0 in January, Impossible Foods worked with independent sustainability consulting firm, Quantis, to carry out an updated life cycle assessment (LCA). The report details the rigorous comparison of the environmental impact of the Impossible Burger to that of a conventional beef burger. It also charts ongoing strategies for even more footprint reductions, including innovations for water saving technology in heme production and burger manufacturing.

Finally, the report offers a first look at soon-to-be-published research on the game-changing carbon-capture potential that would be enabled by replacing livestock with plant-based meat production, and allowing native ecosystems that have been usurped by feed crops and livestock grazing to recover their original biomass and biodiversity. The findings help quantify the ways that plant-based diets can literally turn back the clock on climate change — the landscapes most valuable for keeping carbon out of the atmosphere are also at the highest risk of destruction to expand meat production for markets across the world.