LCAs are becoming increasingly important in identifying ways to help solve the climate crisis — not only in pinpointing inefficiencies, but in highlighting how relatively small changes can create a huge, lasting, collective impact.

COVID-19 could be the kickstart the climate fightback needs. Recovering from the pandemic provides a “profound opportunity” to make sure the world heads in the right direction to “tackle climate change, protect the environment, reverse biodiversity loss and ensure the long-term health and security of humankind,” according to UN Secretary-General António Guterres.

But as economies recover, the carbon challenge will remain, even if nations do take heed new policy advice — such as using taxpayers' money to fuel sustainable regrowth. Decoupling economic growth from ever-increasing greenhouse gas emissions — something only a handful of nations have achieved — will be top of the agenda for businesses and governments everywhere.

To address the impacts we are having on the planet, businesses must have a full understanding of how that impact is being created and where it is being felt — not just in making products, but at all stages of a product’s life.

A popular method for building this understanding is through lifecycle thinking; this helps to recognise how our choices influence what happens at each of the lifecycle stages of a product (or service), so we can balance trade-offs and positively impact the economy, the environment, and people.

Carrying out a lifecycle assessment (or LCA) is a sure-fire way to assess the true environmental impact of a product or production system from the cradle (the extraction of raw materials or growing of crops) to the grave (when the product is used, recycled, reused or disposed of), and all stages in between (including energy generation, manufacturing and transportation).

This type of analysis is especially useful in building an understanding of complex supply chains and production processes — such as brewing, which can involve a number of variables.

It is something the Nutrition and Biosciences arm of DuPont has been looking at, as a way to establish the lifecycle impact of using its enzymes in the brewing process to reduce the overall environmental impact of making beer.

And the results are stark.

The LCA focused on cradle to boiled wort — the links in the chain where the enzyme can have an impact — and didn’t look at any downstream processes, such as fermentation, packaging, storage and distribution, where the impact is the same in both cases.

The LCA revealed that by switching to barley brewing using the DuPont enzyme technology, brewers can achieve substantial environmental and cost savings. That’s because, by supplementing natural enzymes in the mash, ALPHALASE AP4 avoids the energy- and water-intensive malting process and boosts the conversion yield of barley to beer.

The water savings potential is huge, with breweries able to cut their use by 0.72 liters per liter of beer — a significant savings, when you consider that conventional beer demands 1.4 hl of process water per hl of beer.

The climate change benefits are equally exciting: Almost half of the energy used for the barley-to-wort extract can be saved, with 90 percent of this coming from eliminating the need for energy use in the malting process.

Overall, climate change impacts — from heating the brewhouse, to watering the barley — can be reduced by 30 percent. The amount of land needed to grow crops is also reduced by almost 9 percent. 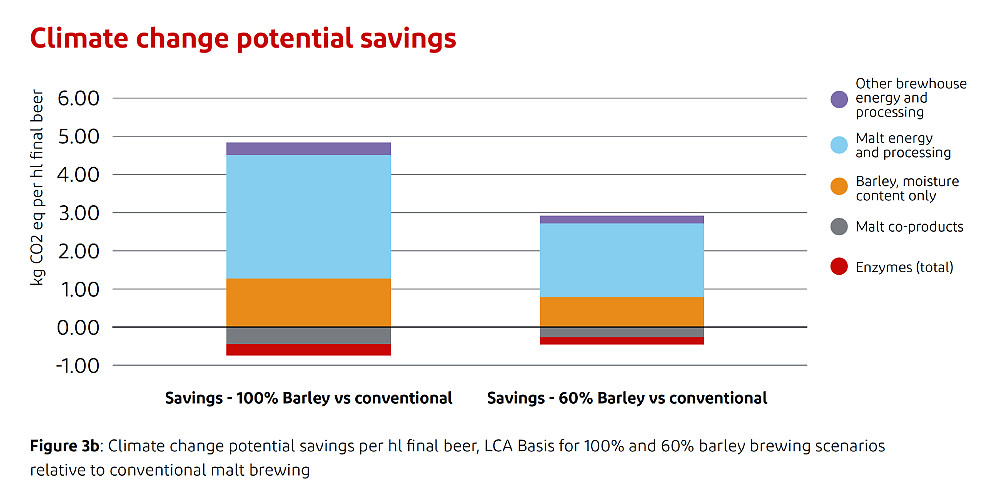 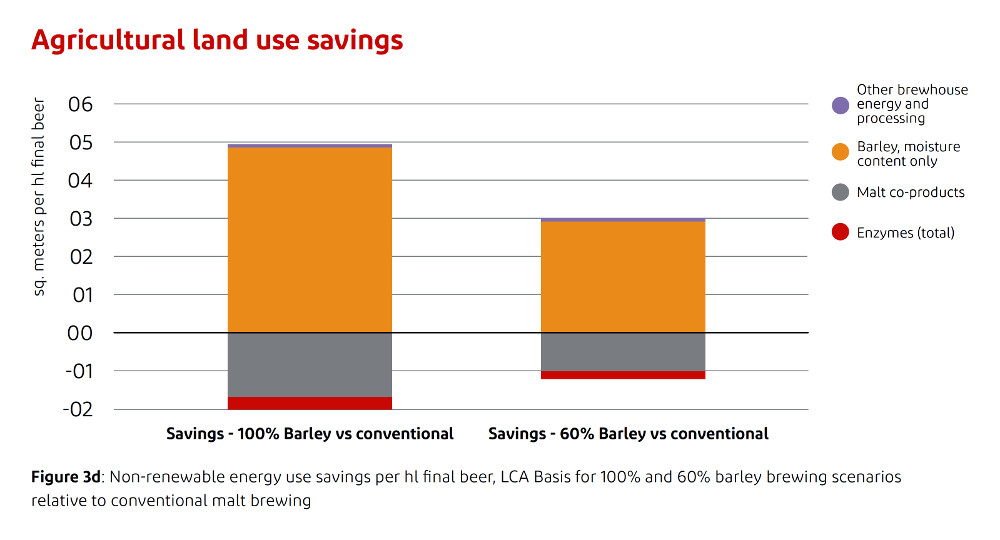 The climate fight is not an easy battle to win, with many businesses finding it hard to strike the right balance between making progressive changes and pragmatically maintaining the status quo.

According to DuPont, even if just 5 percent of Europe’s brewers that use exogenous enzymes switch to barley brewing with ALPHALASE AP4, the climate benefits amount to the same as installing 243 wind turbines. And the energy savings would be roughly 126 million kWh of electricity — enough to power more than 30,000 UK homes a year.

LCAs are becoming increasingly important in identifying ways to help solve the climate crisis — not only in pinpointing inefficiencies, but in highlighting how relatively small changes can create a huge, lasting, collective impact. This will be crucial as the world transitions to a low-carbon normal in the future.