Edinburgh-based startup Gravitricity has developed a unique energy battery system that, unlike conventional battery systems, can operate for decades without any reduction in performance.

The falling cost of ever-maturing clean energy systems is well documented. Data shows that the costs for renewable energy technologies fell to a record low in 2018; and by next year, both solar PV and onshore wind farms will be cheaper to develop than the lowest cost fossil fuel-based alternative. And these cost reductions are likely to continue into the next decade.

Of course, energy storage technologies will need to keep pace with the explosion of generating capacity to help balance variable supply and demand. Systems will be used in complex ways, and energy storage will increasingly become a “practical alternative to new-build generation or network reinforcement,” according to Bloomberg New Energy Finance.

It is in solving the green-energy supply-demand conundrum that Charlie Blair hopes his technology will play a key role.

His Edinburgh-based startup, Gravitricity, has developed a unique energy battery system that works by raising a number of heavy weights in a deep underground shaft, and then releasing them when energy is needed.

The weights, totalling up to 12,000 tonnes, are suspended in a deep cavity by cables attached to winches. When there is excess electricity — on a windy day, for example — the weight is winched to the top of the shaft ready to generate power. The weights can then be released in less than a second, with the winches acting as generators to produce either a large burst of electricity quickly, or releasing it more slowly depending on what is required.

According to Blair, who has submitted four patents for Gravitricity (two have been accepted for grant and two are still being examined), his system can be operational for decades without any reduction in performance, unlike battery systems.

Of course, using gravity to store energy is not a new idea; the UK already has a number of pumped storage hydropower schemes in operation, which involve pumping water uphill and releasing it when it is required.

The brains behind Gravitricity are Peter Fraenkel, the company’s technical director; and Martin Wright, its chairman — both of whom have spent many years in clean-energy generation.

“It’s clear that storage is the other half of the clean energy equation, so it made sense that they’d be looking out for ways to solve that,” Blair says. “Taking a simple and elegant idea and then keeping the engineering as simple as possible is classic Peter Fraenkel.”

Beyond mine shafts, the startup also believes its technology can be installed in the foundations of new skyscrapers, turning city buildings into huge green energy stores.

While analysts predict Gravitricity’s system could store energy at half the levelised cost of lithium-ion batteries, for example, Blair admits building shafts for clean energy storage under high-rise buildings “won’t be super cheap.”

“But the concept is all about avoiding costs elsewhere,” he explains. “Skyscrapers have large foundations, so the trick will be to incorporate much of our shaft into foundation structures that will be built in any case.

“And upgrading the hardware of the grid can cost tens or hundreds of millions for city-centre sites,” he says. “Storage can help reduce or even avoid that spend — though to work, that storage has to be long life.”

For this vision to be realised, both building project developers and contractors responsible for city grids will need to be brought into the concept. But there’s plenty of scope for “win-wins,” Blair says, with more city-centre renewables coming to fruition, reducing overall site development costs.

How quickly Gravitricity will pay for itself all depends on the size of the system and the site-specific revenues and cost-savings available. But the company claims that its system will be “extremely cost-competitive in any situation where more than ten years of lifetime are required.” 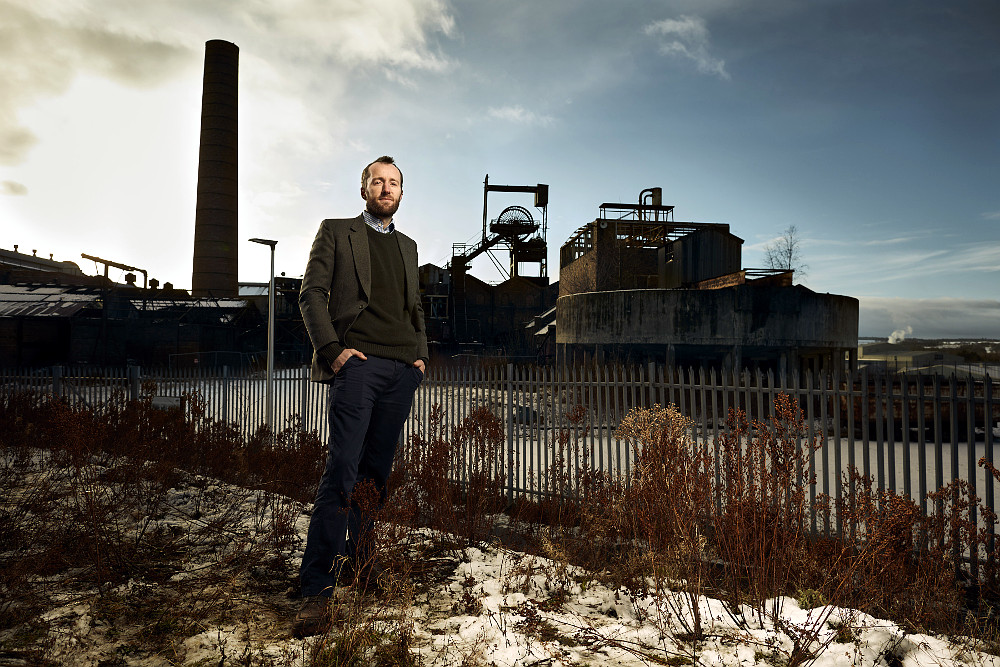 Charlie Blair at Gravitricity's concept demonstration system at a mine in Newtongrange, Scotland | Image credit: Gravitricity

So, where does Gravitricity go from here? Right now, having built a concept demonstration system in Scotland (pictured, above), the plan is to build a full-scale, working prototype in a disused mine shaft somewhere in Europe in the next couple of years. Operators of mines that are reaching the point of closure are looking for ways to keep the shafts ‘alive,’ rather than merely filling them in — and Gravitricity is poised to step in. It is currently speaking to mine owners in Poland, Finland, Czech Republic, Romania, Germany and South Africa.

The company has already received a £640,000 grant from Innovate UK, the UK Government’s innovation agency, and joined forces with the winch company Huisman to build a 250kW scale prototype of their idea.

Now, a CrowdCube campaign aims to further raise money to support its development plans —though the business has already more than tripled its minimum fundraising target on the crowdfunding site.

“The climate emergency means we need to find new ways to capture and store green energy so we can use it when we need it,” Blair concludes.