On the theme of “Delivering the Good Life,” SB'20 Yokohama was held on February 19–20 in Yokohama City, Kanagawa Prefecture, just outside of Tokyo. The fourth SB conference in Japan attracted 231 speakers and more than 3,300 attendees, making it the largest-scale event in the global Sustainable Brands community.

SB’20 Yokohama addressed a wide range of topics, but of particular note were:

KoAnn Skrzyniarz, founder/CEO of Sustainable Brands Worldwide, opened day one by emphasizing the importance of collaboration and co-creation to address global issues such as the climate crisis, loss of biodiversity, and growing inequality: “It seems like there are many, many issues in the world and that we are isolated among them. However, we know that the only correct way forward is to work together.” 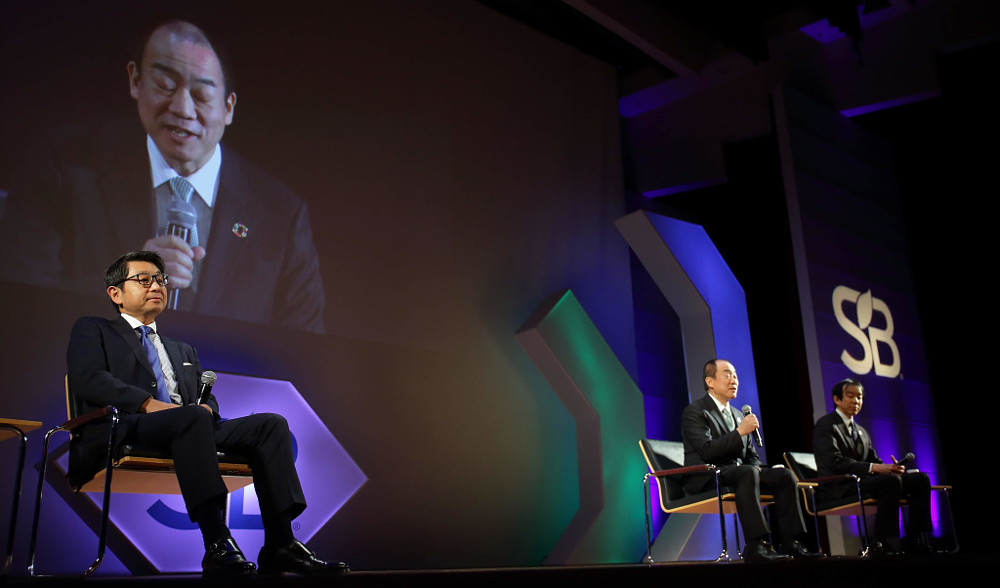 To illustrate that point, a keynote panel then discussed inter-company cooperation. Yasunori Ogawa and Kiichiro Miyata, CTOs of Seiko Epson and Omron, respectively, shared how their two companies have been closely linked with Japanese manufacturing ingenuity. Through the likes of its PaperLab, which transforms waste paper from offices into recycled paper, Seiko Epson has in recent years created innovative products that address real-world problems. Ogawa outlined the company’s proactive stance toward open innovation, saying: “When addressing social issues, if we make the technology that we have developed openly available and have many people use it, then technology becomes more useful to society.”

Miyata linked the idea of promoting collaboration to the current state of society, explaining that “the scale of social issues is expanding”; and, as Ogawa said, that: “One company can no longer solve these issues on its own. I feel that building the systems for real-world implementation is becoming critical, such as who to partner with and to what extent, and who is responsible when making real-world demonstrations, by governments or companies.”

By contrast, Kao — a major manufacturer of daily necessities — is working to create innovation through design. Befitting of the first Japanese company to state its participation in a global sustainable brand community, Kao is a leader in sustainability among Japanese corporations.

In presenting the “Kirei Lifestyle Plan” aspect of Kao’s ESG strategy, Dave Muenz — executive officer and SVP of Kao’s ESG Division — explained that “Kirei” is comprised of three elements: being clean, well-ordered and beautiful. He elaborated that it not only describes beauty in appearance, but also attitude; and thus, showing care toward nature is also part of “Kirei.”

The Kirei Lifestyle Plan includes three commitments that the company aims to achieve by 2030: “Making my everyday more beautiful,” “Making thoughtful choices for society,” and “Making the world healthier & cleaner.” To achieve its commitments, the company has laid out specific actions that it will take regarding 12 key issues, such as decarbonization, responsible procurement, and the promotion of sustainable lifestyles.

Among those, one unique action is the implementation of inclusive product design. By adding ridges and texture to its product containers, for example, users can tell if a package contains shampoo, conditioner, or body soap, etc., all by touch — without needing to rely on visual cues. Kao is thinking ahead with the goal of making these specifications an industry standard, enabling any brand’s products to be distinguished by using common shapes.

Muenz laid out Kao's ambitious plan to have “100% of our products in conformance with guidelines for universal design by 2030.” 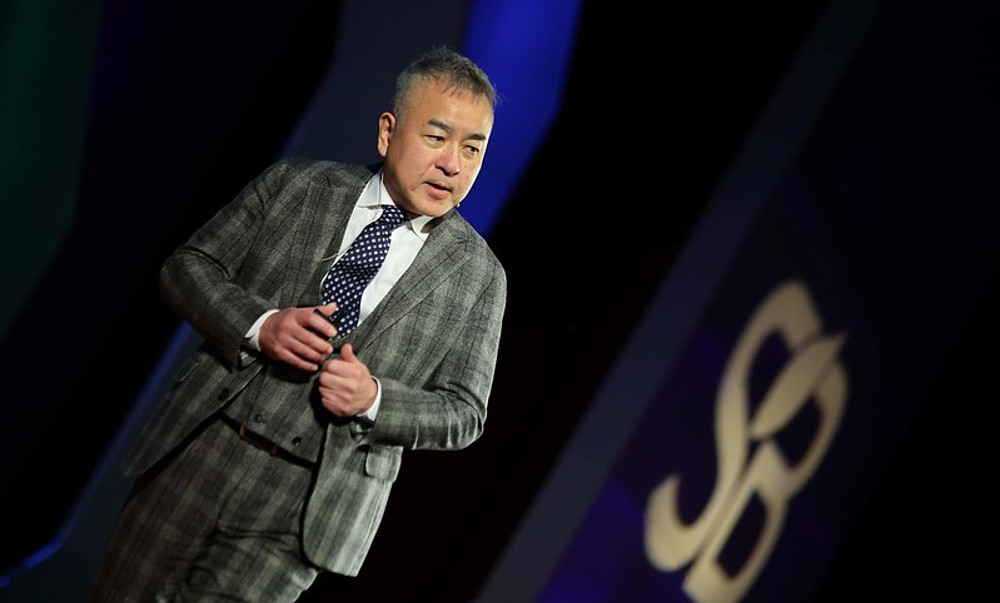 While acknowledging that its own products are “not sustainable,” there are companies that are changing their business model by finding new corporate roles so as to make progress toward a sustainable society through technical innovation. Satoshi Inoue, VP at Philip Morris Japan Limited, addressed the crowd with his request: “If you don’t smoke now, please don’t start smoking in the future. If you smoke now, please quit. These are the best choices.” Philip Morris’ business previously centered on cigarettes but is shifting its focus to heated tobacco products in order to provide “better choices.”

Inoue declared: “If we were to abandon our cigarette business tomorrow, that wouldn’t mean that people would be healthier. Smokers would likely buy from other suppliers. As a better choice, we are focusing on our rollout of heated tobacco products only for people that smoke now. At PMJ, this is our challenge toward creating positive change for society.”

Public and private sector working together to revitalize Japanese communities

Based on the concept that “cities are also brands,” the SDGs Future Cities Brand Conference was held at the same time and at the same venue as SB'20 Yokohama. A wide range of companies and local governments worked together beyond their respective sectors to analyze the state of their communities and to create business opportunities, taking initiatives that would also enrich lifestyles in their respective regions.

For example, Yoshiaki Suda, Mayor of Onagawa Town — which suffered terribly in the March 11, 2011 Great East Japan Earthquake and tsunami disaster — took the stage with the PwC Consulting cross-industry social-issues resolution team. “Social impact management” is a technique to firstly visualize and then manage social issues, and the speakers outlined how this approach was utilized in Onagawa's recovery efforts involving extensive disaster damage.

Mayor Suda said: “We constantly thought about what the definition of recovery actually is. There is no question that for individuals, that means rebuilding their homes and restarting their businesses. But from a local government perspective, within the many new connections born out of the recovery process, we were able to think about what challenges we needed to take on to overcome the issues we faced; and by doing so, to discover the value in our community. We believe that this formed the definition of recovery in Onagawa Town.” Through PwC's analysis and objective data, connections between people and communities were re-imagined as assets, rediscovering the value they contained.

Takayuki Miyagi, a partner (Public Services) at PwC Consulting LLC, mentioned: “Not just in terms of disaster recovery, Japan is ahead of the world in facing head-on the issues of an aging society and population decline. The world is watching how we solve these issues. We want to lead the solutions. In order to address the issues in local communities, it is important to take an approach that visualizes the issues while creating collective impact.”

With the impact of Japan’s population decline becoming apparent, one issue that has grown into a major problem in recent years is the increasing number of vacant houses in many areas. The city government of Kamaishi in Iwate Prefecture is working to solve this problem together with LIFULL — the largest real estate information service in Japan. Masahiro Watanabe of LIFULL described the situation: “There are approximately 8.5 million vacant houses in Japan. LIFULL’s regional revitalization business began by creating a database of vacant house information.” Leveraging this database, LIFULL has collaborated with the Kamaishi City government to promote usage of vacant houses, support users of such, and train vacant house consultants.

Yuichi Kubota, Deputy Mayor of Kamaishi City, said: “While there has sometimes been friction between local residents and people from outside the community wanting to use vacant houses, it is necessary to get house owners to understand that there are benefits to the usage of vacant houses, such as in the energizing of the local economy and increased visitor numbers.”

Ørsted’s approach to the climate crisis

The breakout sessions of SB'20 Yokohama covered a wide range of topics — discussing not only distinctively Japanese issues such as innovation and regional revitalization, but also global issues such as the approach to marine plastic pollution or human rights risks in the supply chain; and of course, the climate crisis.

Phillips explained: “When manufacturing offshore wind equipment, the largest issue facing our organization is CO2 emissions. This is our largest hurdle to overcome in our aim to be carbon neutral by 2040.” Ørsted already requires its key suppliers to report on CO2 emissions levels. It has set base targets and pushes its suppliers to transition to clean energy. It is also drawing up plans about initiatives to reduce CO2 emissions in transport. Related investment has reached US$29 billion over 10 years, and it plans to invest another US$30 billion over the next six years.

When Furuno asked about his thoughts on the necessity of linkages across sectors, Phillips replied: “The cooperation of everyone is necessary — including governments, institutional investors, organizations, individuals, and society. We all have the ability to influence the climate crisis. The people attending this conference can influence their organizations, and the time to use that influence is now.” The technology exists, and renewable energy is becoming cheaper than power generated using fossil fuels. “There are no excuses,” Phillips declared.

Creating a circular economy in offices

Another topic of global interest and relevance is the circular economy. SB’20 Yokohama included multiple sessions on the theme, but unique among them was the session on “Creating a circular economy by implementing circular offices.”

PwC plans to relocate several offices at the end of this year, and has begun collaborating with the likes of DSM in order to seize the opportunity to achieve circularity within offices — this initiative was also the spark that led to this session. In fact, PwC UK has been implementing its Going Circular Program since 2007 and has achieved a reduction of landfill waste to zero and 100% resource reuse/recycling in its offices.

As the panel confirmed, achieving the circular use of all resources at one company is not possible, and collective impact and following cradle-to-cradle principles are necessary in order to realize a circular economy. A client of So Now Asia’s in the Netherlands is developing systems to track when and how all of its office supplies are recycled. That client is also collaborating with DSM, thinking as far ahead as to how materials such as interior paneling will be recycled into future resources after their useful life, and thus choosing materials appropriately — even thinking about the types of adhesives used in the interior fit out.