At Cabify, our team’s female representation more than doubles the technology sector’s average. Safe and inclusive transport plays a crucial role in socially sustainable development — so, if we want truly inclusive cities, we must also listen to women.

The current global population is just over 7.57 billion people, of which around 49.7 percent are women and 56 percent live in urban areas. Arithmetic leaves us with 2 billion women living in cities.

However, women make up less than five percent of mayors, and there are extremely few female decision-makers running Transport Ministries in the world: Paola De Micheli (Italy), Ángela María Orozco Gómez (Colombia), and Gloria Hutt Hesse (Chile) are the most prominent names within this tiny minority group. Although there are good examples of remarkable women in transport, they still fit in two studies of the Transformative Urban Mobility Initiative.

Not only at the country level but also among urban leaders, engineers and planners, women’s perspectives and voices are significantly under-represented. Too often, as the Women Mayors' Network points out, “the shape of urban development excludes women.”

“At present, it is fair to argue that there are no systematic gender-inclusion procedures for transport — neither in terms of training of professionals, participation of users nor the design and planning of systems, services, and equipment,” states the United Nations Economic Commission for Europe (UNECE).

Although transportation seems to be a man’s world, women use public transit more. That’s why the Swedish Transportation Department proposed integrating gender analysis into Swedish transportation policy and administration practices to advance the goal of creating "a gender-equal road transport system designed to fulfill the transport needs of both women and men." Objective or perceived lack of citizen safety directly affects women’s wellbeing and access to wide-ranging opportunities, as they are the primary users of public transport and public spaces as pedestrians.

The numbers are disheartening; but we can find inspiration in the mission and action of international organizations — such as WTS, WISTA, Aviadoras and Women in Transport, among others — that are working towards gender equality, diversity and advancing both the transportation industry and the professional women who are a growing part of it. And the Transport Gender Lab is strengthening the gender perspective in transport through cooperation and public policy in 12 cities in Latin America.

In ride-hailing services, the use of digital platforms and intelligence to connect vehicle owners with riders in cities offers a significant employment opportunity for female drivers, engineers, designers, user researchers, data scientists and all kinds of STEAM and transportation professionals. It is an industry capable of improving inclusiveness in urban mobility through the participation of women in different roles.

Argentina constitutes an interesting example of female under-representation in mobility: women solely account for nearly 27 percent of driver’s licenses. Hence, we at Cabify — in partnership with Luly Dietrich's popular Mujeres al Volante community — are holding a variety of activities and training programs with a view to bolstering women's access to the mobility industry, as well as their self-autonomy.

At Cabify, our team’s female representation more than doubles the technology sector’s average. We truly believe in the opportunity this represents and the change we are making. By boosting women’s prominence in the urban mobility space and truly promoting their access to senior management positions, our inclusive vision for this sector is slowly but surely becoming reality.

But major challenges still lie ahead in the mobility world: In our specific case, only 1.5 percent of our drivers are women; so since 2019, we have been working together with IDB Invest to understand the factors that could increase female drivers in our streets.

As the urbanist Jane Jacobs once said, “Cities have the capability of providing something for everybody … only when they are created by everybody.” And because safe and inclusive transport plays a crucial role in socially sustainable development; if we want inclusive cities, we must also listen to women. 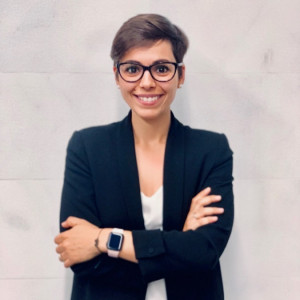