Published 3 years ago. About a 6 minute read.
Image: Bonterra Wines

A landmark soil study from Bonterra Vineyards that proves the climate benefits of organic and biodynamic farming, and a new UK gin made from surplus table grapes, mean these wines and spirit help you “drink responsibly.”

Bonterra Organic Vineyards, the US’ leading organically farmed wine, has completed a landmark soil study highlighting the benefits of organic and Biodynamic® farming on soil health. Conducted by Pacific Agroecology on behalf of Bonterra, the study analyzed all of the roughly 1,000 acres of Bonterra’s Mendocino County vineyards, with results showing that Biodynamic sites hold the most soil organic carbon (SOC), followed closely by organic sites; both are superior in storing carbon to conventional farming.

The soil study is the first research step in Bonterra’s long-term commitment to understand, practice and promote the important topic of soil-carbon stewardship, and is in keeping with Bonterra’s mission to champion regenerative agriculture as an important element in the global effort to address climate change.

Data from the 2017-2018 soil study, which measures density of SOC, indicate that Bonterra’s vineyards farmed with Biodynamic and organic farming methods correlate with 12.8 percent and 9.4 percent greater SOC levels, respectively, than those found in a similar vineyard site farmed conventionally. The research took place over 12 months on 13 vineyards (nine organic, three Biodynamic, one conventional) across Mendocino County, and included more than 500 grapevine biomass samples and more than 100 soil samples from vines planted between 1987 and 2015. The same study reviewed soil and above-ground carbon stores in Bonterra’s undeveloped wildlands, demonstrating that total carbon storage in wildlands remains higher than in production lands, indicating that continued conservation efforts are also beneficial.

The impact of organic carbon stored in soil

“Soil organic carbon — something regenerative farming strives to enhance — is a signal of how well a landscape captures and stores carbon, and also contributes many long-term benefits to soil health, such as improved aeration, drought resistance, and erosion prevention,” said Joseph Brinkley, director of vineyards for Bonterra.

Bonterra strives to enhance soil health on its Mendocino farms through a coordinated mix of regenerative practices — including applying compost, planting cover crops, planned sheep grazing, reduced tillage regimes, enhanced insect and wildlife programs, and conservation of nearly 50 percent of its land in a natural state.

A 2017 report by the Food and Agricultural Organization of the United Nations entitled “Soil Organic Carbon: The Hidden Potential”2 states: “As an indicator for soil health, [soil organic carbon] is important for its contributions to food production, mitigation and adaptation to climate change.”

As Elizabeth Drake, Bonterra’s regenerative development manager, noted of the study: “The results of this study provide early indication that regenerative farming practices lead to healthier, more productive soils, while contributing to the mitigation of climate change by holding more carbon underground.”

With 30 years of organic farming under Bonterra’s belt, its wines have long been a sustainable option for eco-conscious winos, but the soil study is the winery’s first research step in its long-term commitment to understand, practice and promote the important topic of soil-carbon stewardship. Bonterra recently initiated a third-party peer-review process for the study so that its results may be further verified, and is also examining methods to conduct additional soil sampling to analyze vineyard carbon storage and carbon fluxes over longer periods. These efforts underscore Bonterra’s deeply rooted belief that regenerative farming practices offer compelling solutions for healthy soils, improved vine and grape quality, and a positive path forward for farming.

“We’re excited about the potential impact of this study, which we hope inspires other farmers to examine the benefits of organic and Biodynamic agriculture,” Drake said. 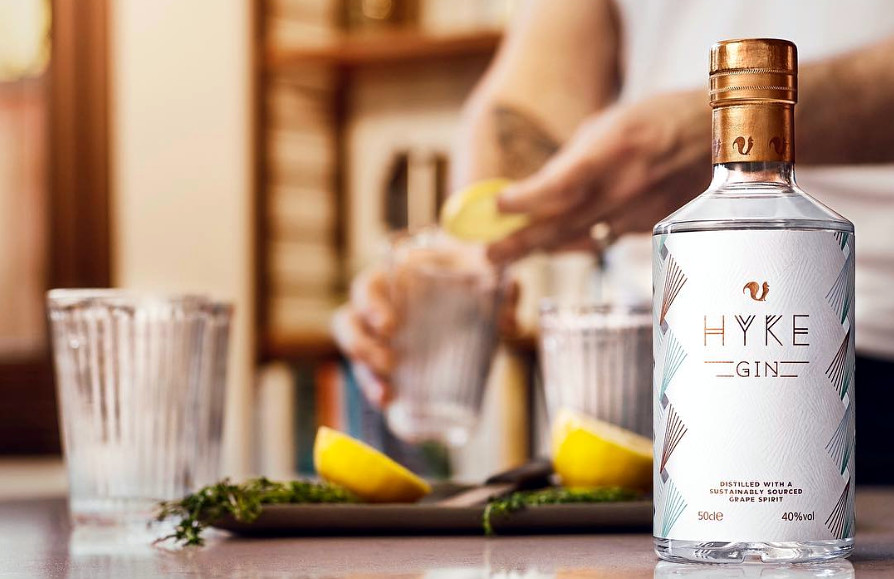 Meanwhile, from wine grapes to table grapes … A major British fruit supplier and a craft spirits producer have come up with a unique way to recycle an estimated 166 million surplus table grapes — by turning them into premium gin.

Called HYKE, the gin goes on sale exclusively at 300 Tesco stores across the UK on Monday, March 18, and supports the supermarket’s ongoing efforts to cut food waste.

Each year, Kent-based fruit supplier Richard Hochfeld Ltd loses the equivalent of 1.4 million punnets (baskets) of table grapes in the packing process. So, in an effort to eliminate this waste, the company has partnered with Tesco and innovative West Sussex distiller Foxhole Spirits.

Karen Cleave, Technical Director at Richard Hochfeld Ltd, explained:* *“For packing, the grapes are cut and trimmed to fit the punnets, leaving loose grapes and tiny bunches that can’t be sold as fresh. The size of the trade means that these lovely fresh grapes — equivalent to the weight of about 3.5 blue whales — end up as compost, animal feed or in an anaerobic digester. Now we’re taking them on a delicious journey, which respects the provenance of the grapes and supports our commitment, as one of Tesco’s biggest suppliers, to cut waste.”

The creation and launch of HYKE comes at a good time — Tesco says gin sales are at a 50-year high and demand for premium gin at Tesco has skyrocketed by nearly 90 percent in the last year.

“We are always looking at innovative ways to tackle food waste and work closely with our suppliers to do just that,” said Tesco Spirits Buying Manager Andrew Hargreaves.

HYKE gets its distinctive character from both the grape spirit and a unique blend of botanicals, inspired by the grapes’ origins in Africa and South America.

James Oag-Cooper, MD and co-founder of Foxhole Spirits, commented: “We knew that there was something special that could and ‘should’ be done with this quality by-product, so we applied our expertise and craftsmanship to the challenge.

”The result is a totally unique product which tastes exceptionally delicious, is beautifully presented, sustainably conscious and yet still affordable.

“Its rich, sweet citrus characters, followed by velvet-textured spice and complex aromatics combine to make HYKE Gin versatile enough for a classic G&T, a refreshing spritz or a sophisticated martini.”

HYKE gin will be sold exclusively at Tesco, in 50cl bottles with a strength of 40% ABV. It costs £24.

Tesco is also leading the charge on sustainability in the UK. Along with being a signatory to the Courtauld Commitment 2025, a commitment to cut food waste by one-fifth within a decade, the retailer has partnered with WWF-UK to continue its efforts by reducing the environmental impact of the average shopping basket by half.

Tesco has also set a target that no food that’s safe for human consumption is wasted in its UK business. Over the last two years, through its food redistribution program and food waste “hotline,” among other measures, it has reached over 70 percent of this target.