Published 3 years ago. About a 7 minute read.
Image: GA Circular

The report provides first-of-its kind, systematic and comparable baseline collection rates for PET bottles in Southeast Asia; and identifies a series of priority actions to transform the post-consumer PET landscape in the region.

As leaders from around the world gathered in Bangkok this week for the inaugural SEA of Solutions: Partnership Week for Marine Plastic Pollution Prevention; and in Porto, Portugal for the inaugural SB Oceans, research and strategy firm GA Circular (formerly known as Gone Adventurin’) launched a first-of-its kind report, in collaboration with The Coca-Cola Company. The report provides systematic and comparable baseline collection rates for PET bottles (one of the most recyclable forms of plastic packaging) in Indonesia, the Philippines, Vietnam, Thailand, Myanmar and Malaysia. Five of these six countries are among the top ten global contributors to ocean plastic leakage.

On a mission to create a world without waste by driving the transition towards a circular economy in Asia, GA Circular supports the assertion that it is vital to move beyond singular efforts and work collectively on efforts to pull packaging material through the value chain by driving material value.

“The report aims to shed light on the current realities for post-consumer packaging in Southeast Asia. A realistic baseline is critical in informing the direction and nature of solutions to be implemented and this is what this report provides,” says Ashwin Subramaniam, founder and CEO of GA Circular. “A circular economy for PET packaging is 100 percent possible in the region; and it is our sincere hope that the recommendations outlined in this report are fully considered by industry, policymakers and investors.”

More than half of the 8 million metric tons of plastic that flow into the ocean every year come from these developing countries in Southeast Asia, where waste management has lagged behind rapid economic growth. Analysis shows that a 45 percent reduction in plastic leakage is possible by improving waste management and recycling infrastructure. The report, Full Circle: Accelerating the circular economy for post-consumer PET bottles in Southeast Asia, reveals that 54 percent of PET bottles sold in cities across the six Southeast Asian countries studied are collected for recycling (based on nine representative cities). The estimated national collected-for-recycling rate across the six countries is 26 percent. Across the six countries, a total of 660,000 tonnes of PET bottles was landfilled or leaked into the environment in 2018, representing a loss of secondary material value of US$199 million. 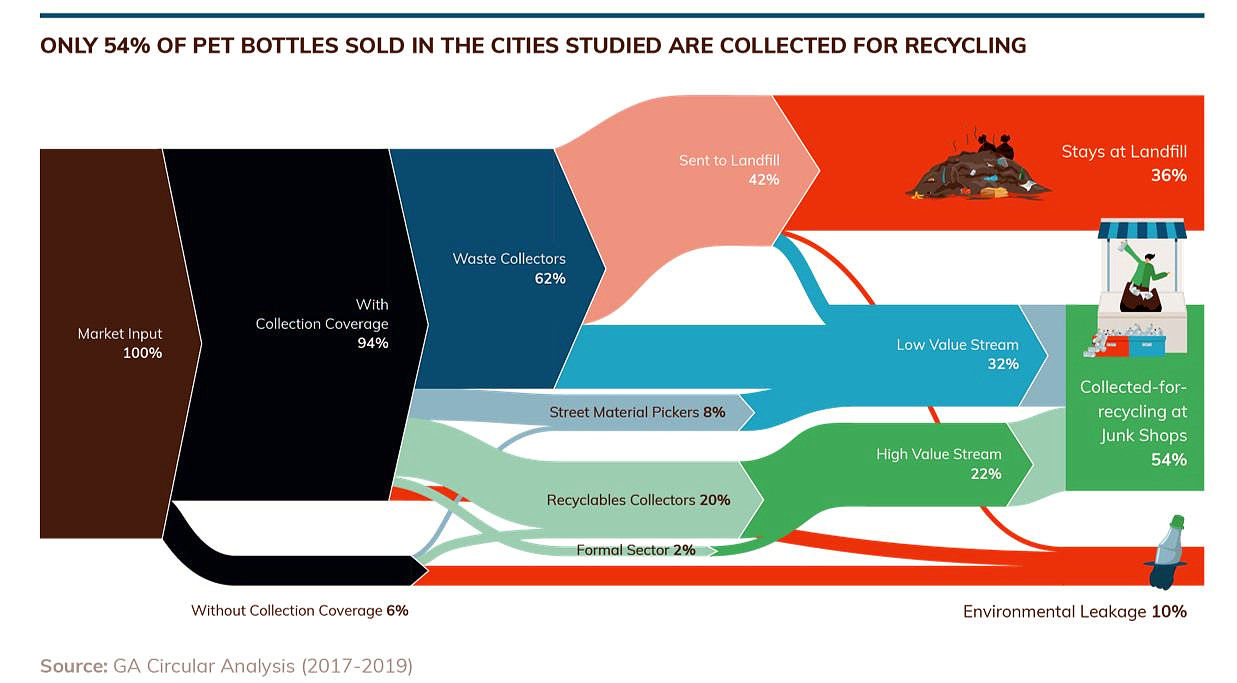 The role of the 'informal sector'

Meanwhile, PET bottles are 100 percent recyclable and have one of the highest intrinsic post-consumer values amongst the materials commonly used for consumer-goods packaging in Southeast Asia, which is why PET bottles are one of the most commonly collected items by the informal sector — the network of amateur waste pickers commonly found in developing countries, making a meager living from the sorting and collection of recyclables.

Full Circle asserts that the informal sector is the backbone of an improved collection infrastructure for PET bottles in the six Southeast Asian countries studied; it contributes to 97 percent of all PET collected for recycling in the nine cities studied — thus any solutions for the region must include the informal sector.

Multiple efforts have been initiated by industry and government over the past decade to increase collection and recycling, however most of these efforts ceased within one to three years or have not ‘moved the needle’ in terms of increasing collected-for-recycling rates. The past initiatives have been quantified and, according to the report, are a “drop in the ocean” relative to the amount of PET bottles consumed.

Against this backdrop and the projected growth in PET bottle consumption of 886,000 tonnes in 2018 to 1.52 million tonnes in 2030, it is critical to focus on systemic solutions. The most effective response to the challenges currently facing the post-consumer PET landscape in Southeast Asia is one that effectively and continually boosts the collection and recycling operations currently in place. The report highlights the need to boost the post-consumer value chain by providing a price incentive to pull the material through the value chain (i.e. increase demand of PET bottles through key stakeholders of the recycling value chain and increase incentives for the informal sector to collect them); and, concurrently, enabling expansion of the domestic recycling industry to create a robust ecosystem.

Existing private-sector efforts to do just this through direct engagement with the informal sector include The Body Shop’s establishment of its Community Trade Recycled Plastic program, which is working to empower up to 2,500 waste pickers in Bengaluru, India; who will receive a fair price for their work, a predictable income and better working conditions, and access to other services through the collection of plastic over the course of three years. Larger-scale initiatives include the work of The Plastic Bank, which has created an economy of “social plastic” in countries such as Haiti and Indonesia, in which waste collectors receive digital currency that can be used to buy everything from food and wifi to health insurance.

The report highlights key systemic solutions to drive circularity, including an industry-led Packaging Recycling Organisation (PRO) focused on boosting the value chain (including benefitting the informal sector) coupled with supporting policies, the use of recycled content, and investments into increasing domestic recycling capacity. Similar models have seen success in comparable developing countries such as South Africa and Mexico; and PET bottle collection and recycling rates have increased to over 55 percent in both countries: As of 2018, South Africa has a 66 percent recycling rate for PET bottles, with 100 percent of the material recycled locally.

Two other factors that play an important role are improved packaging design to improve the economics of recyclability, and national government and municipal efforts to impact source separation and separate collection. 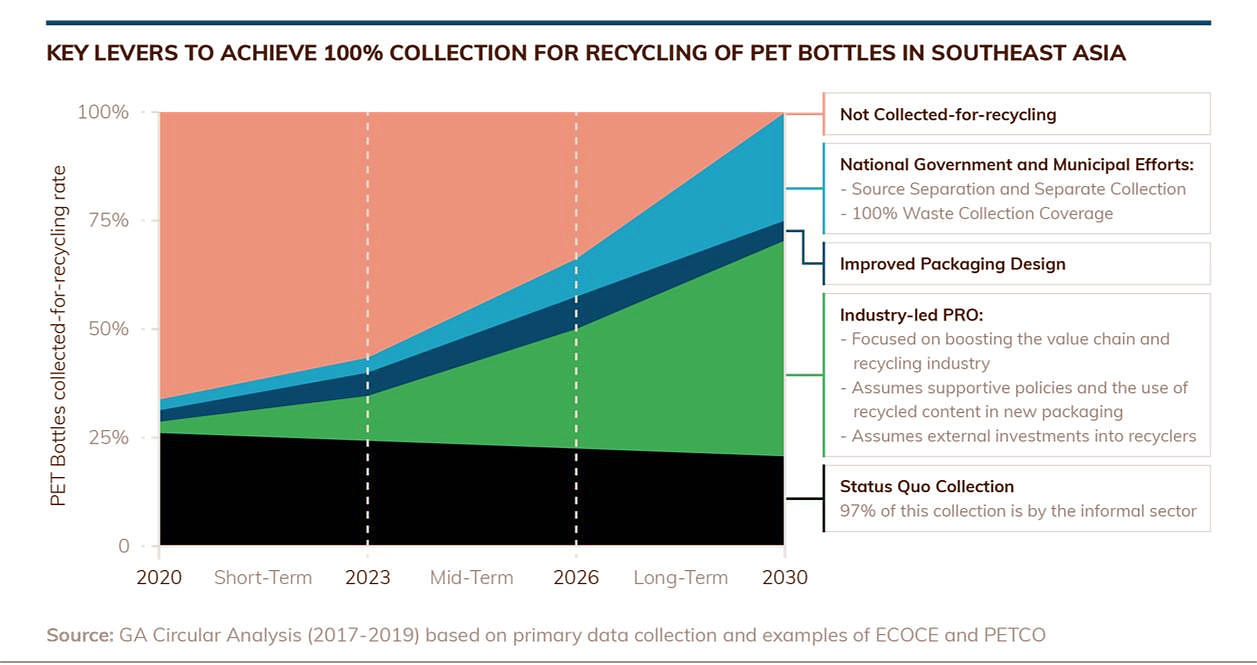 By publishing the report, GA Circular said it sought to bring an important missing piece to packaging circularity solutions in Southeast Asia, demonstrating the key levers for industry, investors and policymakers to build a thriving and robust recycling industry.

“The report delivers a first-of-its-kind analysis of collection-for-recycling rates for PET plastic in key ASEAN cities and frames up a circular economy roadmap specifically tailored for the region, with a concrete set of recommendations geared towards interventions with the highest impact,” said Michael Goltzman, VP of Global Policy and Sustainability at The Coca-Cola Company. “At Coca-Cola, we are committed to executing these recommendations with our partners, and we have already begun to move in earnest. It is our hope that this report also helps to drive broader understanding, coordination and momentum in our shared efforts to tackle marine plastic pollution in Southeast Asia and globally.”

GA Circular calls on companies and industry in Southeast Asia to adopt voluntary PROs focused on value creation mechanisms and material end markets; and for governments to support with enabling policies and standards for the circular economy, such as food-grade recycled content standards, recycled content targets, and source separation and separate collection.

“The findings of this report have clear and consequential implications for accelerating plastic action in Southeast Asia,” said Kristin Hughes, Director of the Global Plastic Action Partnership. “They underscore the urgent need to scale up the region’s infrastructure for collecting and recycling PET bottle packaging, a staggering source of mismanaged plastic waste. And more importantly, they identify highly valuable opportunities — investments, innovations and systemic policy changes — that must be leveraged in order to achieve concrete progress.”

Speaking of investment, Circulate Capital — the impact-focused investment management firm dedicated to financing companies, projects and infrastructure that prevent ocean plastic — is working to foster investment in innovation aimed at solving the challenge, with an emphasis in Southeast Asia: In 2018, Circulate launched an incubator network to accelerate solutions to ocean plastic waste in the region by partnering with existing incubators to build ecosystems of waste management and recycling innovators.