The Next Economy
Rwanda’s Akilah Institute:
Where Women Mean Business

In November 2019, a small group from Kaldi’s Coffee and Firepot Nomadic Teas traveled to Rwanda to see their impact up close and where they could do more. Kaldi’s, one of the larger specialty coffee companies in the US with multiple brands; and Firepot — a sister company whose mission is to connect and improve the lives of tea growers and tea lovers — the majority of whom are women, have been sourcing product there for years.

Rwanda was an easy choice from a business standpoint, despite its brutal legacy. Since the 1994 genocide against the Tutsi that took nearly one million lives, the country has transformed itself into one of the fastest-growing economies in East Africa — a top-quality producer for coffee and tea, its two main exports; and a leader in sustainability.

“I see so much potential in Rwanda,” said Tricia Zimmer, a co-owner of St. Louis-based Kaldi’s. “The people are welcoming, and the country is progressing quickly. I am impressed.”

When Kaldi’s began to source coffee in Rwanda in 2015, it saw an opportunity to improve the lives and livelihoods of growers; and by extension, the country as a whole. It has delivered on that commitment by paying above fair-trade minimums for quality beans; and through its work with local cooperatives such as Abakundakawa, which has operated since 1999 and means “people who love coffee” in Kinyarwanda.

The Hingakawa Women’s Association — a group within the 1,900-member coop — has distributed cows, goats and pigs to members; and plans to build a training center to support early childhood development, nutrition programs and other income-generating initiatives. Sholi, which means “mutual assistance,” is another cooperative that works with Kaldi’s and boasts a large female membership. It received its fair-trade certification in 2015, seven years after it started, and continue to invest in long-term agriculture and the community itself through a new regional health center for members and residents.

Kaldi’s is also focused on sustainability. “It plays into a lot of different segments of our business,” Zimmer said. “We think about sustainable packaging and use our coffee grounds for composting when possible. We also reuse our burlap sacks for all kinds of purposes, such as donating them to schools; half of our employees typically bike to work.”

Since its inception in 2001, Firepot — also based in St. Louis — has been interested in sustainable agriculture and how it can impact the world.

“Fair trade and organic is more than a nice-to-have for us. It is embedded in our business model,” enthused owner Sarah Scarborough, as we explored the tea plantation at Sorwathe, where she buys 100 percent organic Rukeri tea for her best-selling chai. “I want to affect things directly. It is the reason why we are around.”

Scarborough participates in 1% for the Planet, whose members commit at least one percent of their annual sales to environmental and social causes. In Firepot’s case, that cause is Akilah — the all-female campus of Davis College in the Rwandan capital of Kigali. The college, which opened in 2010, offers advanced diplomas in hospitality management, information systems and small business management & entrepreneurship, all linked to high-growth sectors in the economy. About half of its 2,000 students and graduates come from rural areas.

Kaldi’s is equally committed to empowering the next generation of female entrepreneurs in Rwanda.

“When we think about the industry from a supply chain perspective, the need is even greater here,” Zimmer said. “If we can complete that circle, it will bring greater benefit to everyone.”

To that end, both companies are eager to engage Akilah students in hands-on learning in the coffee and tea industries, to open their eyes to the possibilities in their country. Akilah, whose academic pillars and curriculum emphasize sustainable development, is a ready partner.

Their collective vision is to set up a retail tea bar and coffee house in Rwanda based on best practices in business, sustainability and supply chain management. The businesses would be student-run and curriculum-driven; and may include internships in the US, where both firms are headquartered. The learning is expected to be two-way, allowing people to come and experience the brands and get involved with the mission.

“These will be gathering places to break down barriers and shift perspectives,” Scarborough said. “To just look at people as people.”

The idea makes good business sense, as well. Last year, Rwanda exported 268,000 bags of coffee or an estimated 97 percent of its production, compared to 40 percent for Ethiopia, another top coffee producer in Africa. That percentage is likely to shift, given the emerging coffee-drinking market in the country. The tea bar concept would be a unique and compelling attraction for locals and foreigners alike in Kigali.

“If we can make a bigger impact by getting more people involved — create more opportunities for women here — then it’s worth it,” Zimmer said. 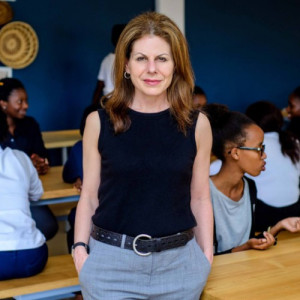