New Metrics
Can Performance Reporting for Different Companies Be Both Context-Based and Comparable?

Mark McElroy
Published 5 years ago. About a 7 minute read.

One of the hallmarks of context-based sustainability (CBS) as an approach to performance accounting in business is that it features the use of organization- or company-specific metrics. Indeed, a basic tenet of CBS is that no two organizations are exactly alike and it makes sense, therefore, for them to use different metrics to assess their performance, all in accordance with their own materiality determinations.

Critics of this approach sometimes allege that a shortcoming of CBS is that it cannot allow for inter-organizational comparisons of performance, since the metrics used to measure and report performance are liable to be different across organizations. Instead, they call for the use of one-size-fits-all alternatives where everyone is using the same metrics.

The premise behind this particular criticism of CBS, of course, is that comparability is contingent upon consistency in the use of what we might call first-order metrics — indicators used to measure an organization’s impacts on vital capitals, including water resources, the climate system, product safety, or wages paid to its employees. In CBS, metrics are chosen on the basis of organization-specific materiality determinations and will almost always vary by company, albeit with some overlap. How to compare different companies’ performances when different things are being measured is the issue here.

This leads to what we might call second-order metrics. A second-order metric is a meta metric in the sense that it provides a uniform way of reporting performance that is otherwise expressed using different (if not incommensurable) standards of measure. Take water as an example: A first-order metric for water in CBS will typically compare usage to a not-to-exceed target for consumption (all in gallons). If consumption is at or below the target, we can say it’s sustainable; if it’s above the target (too high), we can say it’s not.

All other first-order metrics can be mapped to the same second-order scale, and that’s what makes meaningful integrated reporting — and comparability between organizations — possible. Indeed, despite the differences in how different organizations measure their own sustainability performance — each according to the results of its own materiality analysis and with its own set of context-based metrics — cross-comparisons of organizational performance can still be made using second-order metrics — sustainability metrics, in this case. All organizations, that is, can be held to the same standard of performance (sustainability), despite the fact that the impacts they’re assessing and the metrics they’re using may be completely different. See the MultiCapital Scorecard (MCS) for an excellent example of this.

Thus, what starts out as the use of different metrics by different organizations (first-order metrics) is later translated into a common language (second-order metrics) rendering performance by all of them comparable. In CBS (and the MCS), then, we get the best of both worlds: organization-specific metrics and comparability. As long as everyone’s metrics, notwithstanding their first-order differences, are measuring performance in accordance with the same general principles, our otherwise different measures of performance can be compared. In CBS, those general principles are (1) integrated materiality, (2) multicapitalism, and (3) sustainability context.

To further illustrate the points I’m making here, let’s imagine two different organizations — a bank and a manufacturer — each of which has defined a different set of metrics for measuring its sustainability (see Figure 1). Each, in turn, will have arrived at its own set of metrics based on the results of a materiality analysis.

With respect to performance, we see that the bank is sustainable relative to its impacts on shareholder returns alone. Its performances relative to gender equity and the content of its loan portfolio, however, are below sustainable levels in both cases. All other things being equal, the bank’s performance is .33 on a (second-order) “meta” scale of 0.0 to 1.0, where only a score of 1.0 signifies full sustainability. 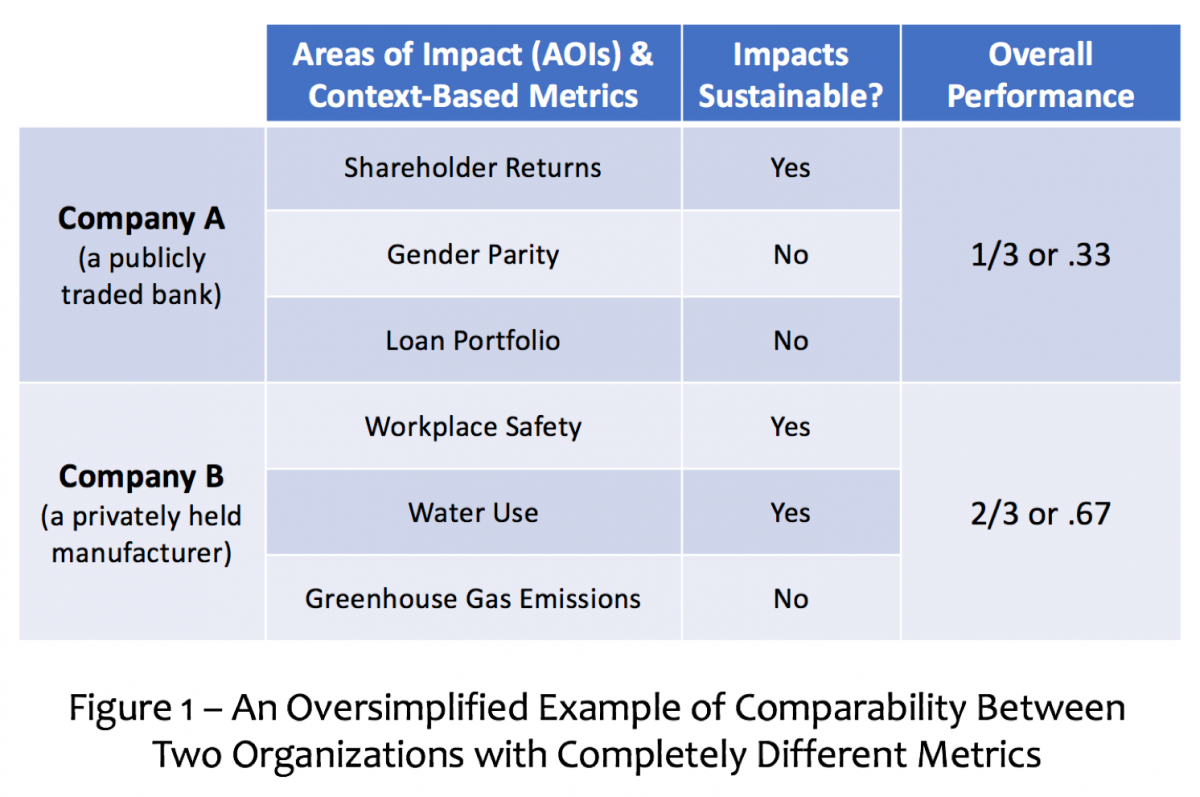 The manufacturer scores a bit better, having lived up to state-of-the-art standards for workplace safety and also science-based standards for sustainable water use. Its greenhouse gas emissions, however, are not at all compliant with science-based standards, so its overall performance (again, all other things being equal) is .67 on the same scale of 0.0 to 1.0 used by the bank.

In this admittedly oversimplified example, we can see very clearly how the performances of two or more organizations using completely different metrics can be compared in a meaningful way. Each company is assessed in terms of its own material AOIs. How they perform relative to one another, however, can still be compared as long as the first-order metrics being used for their AOIs adhere to the same general principles listed above.

Having Our Cake and Eating It, Too

With context-based measurement and reporting, we can have our cake and eat it, too: We can reap the benefits of thoughtfully performed materiality analyses, tailor our measurement systems accordingly, and use context-based metrics, as well — all while preserving the possibility of comparing our performance with others, whose own material areas of impact, metrics, etc may be completely different from our own. All that is required is that we share a commitment to sustainability and to context-based measurement, which after all is the only meaningful way to assess sustainability performance in the first place.