In 2020, the Port of Portland embarked on a transformative remodel of Portland International Airport (PDX). The PDXNext New Main Terminal project, a 1,000,000 square-foot renovation and expansion of PDX’s terminal core, won a 2022 FSC Leadership Award for its dedication to sustainably sourced materials — the ambitious project features a 9-acre mass-timber roof structure built from wood that was responsibly sourced to protect the Pacific Northwest’s most beloved cultural and natural resources. Unique in scale, the project connects 2.2 million board feet to the forests and people that grew the trees.

The project worked with local tribal, private and public landowners including the Coquille Indian Tribe’s forestland in Southwest Oregon and the Yakama Nation’s forestland in Central Washington.

When the Port of Portland began strategizing how to build the curvy, 9-acre roof out of Douglas fir from local, sustainably managed forests, Paul Vanderford, Director of Green Markets at Portland-based nonprofit Sustainable Northwest, joined the effort to help construct a supply chain for this wood — one that had never existed before.

“The airport is on the cutting edge in terms of directly knowing where the fiber (wood) being installed in a building comes from,” Vanderford says. “The relationships we forged allowed us to bring members of the supply chain — including loggers, forest owners, tribal members, mill workers and brokers — together to honor their contribution. This project gives them an opportunity to see their beautiful wood as an installed product they can show their families when they fly through the airport — a connection they can take pride in.”

“This project has created a dialogue that normally doesn't happen between architects in Portland and people who work with chainsaws in Mill City, Oregon,” says Ryan Temple, President of Sustainable Northwest Wood. “Building understanding and empathy toward each other's livelihoods is another important, lasting impact.”

The glulam beams used in the remodel, produced by Zip-O-Laminators in partnership with Timberlab, represent 1.9 million board feet of wood sourced from well-managed forests in Oregon and Washington. Both companies earned FSC certification to help the project meet its goals.

The largest beams are 80 feet long and 8 feet thick — the largest curved glulam beams ever made in the United States. The alternative would have been to connect two smaller beams with large steel connections, costing the project millions more dollars and creating a much higher carbon footprint. Unlike almost any other building in the world, many of the beams in the airport are traceable all the way back to the forests where the wood was grown. 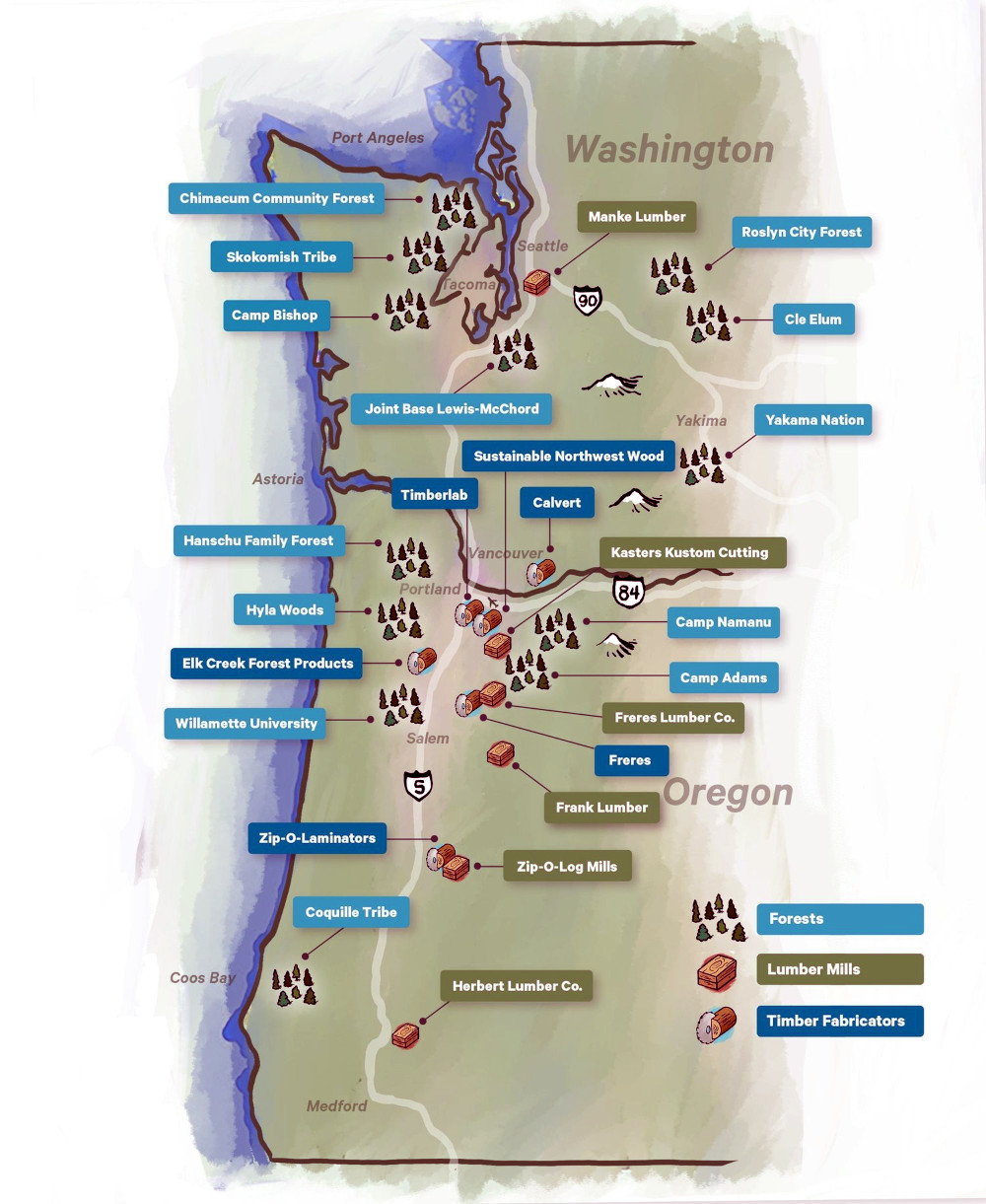 View an interactive graphic highlighting all of the landowners, mills and fabricators here.

Many of the landowners and forest managers involved with the project understand that good stewardship involves more than ensuring the continued, unchecked growth of the forests; the key to longevity of these resources is balance and biodiversity.

Ben Hayes is a sixth-generation forester and sustainable forestry consultant who co-owns and manages Hyla Woods — a sawmill outside of Cherry Grove, Oregon — with his father, Peter. At Hyla Woods, the Hayeses experiment with selective thinning and patch cutting, instead of clear-cutting, to foster diversity of tree species, ages and sizes.

“When you look 100 years out, having greater complexity in terms of species and the structure of the forest can increase the forest’s resilience in the face of extreme weather and drought,” Ben explained. “We’re working toward a model of forestry that you could practice for the perpetual future; it’s a model that lifts up both rural and urban communities and the ecosystems we rely on.”

“We know historically that the stands we’re working on were overstocked,” Herman Flamenco — Central Cascades Conservation Forester with The Nature Conservancy (TNC) — says of the 50,000 acres outside of Cle Elum in central Washington, which TNC manages. Thinning trees welcomes in light, fosters biodiversity and decreases wildfire risk.

“Western Washington is wetter. In our dry climate, there’s less moisture and increased fire risk,” Flamenco says. “As we look at climate change, it’s just going to get drier. We want to make sure we can keep our forests around.”

Sponsored Content / This article is sponsored by Forest Stewardship Council.