Press Release / Atlanta, March 26, 2015Program with UNHCR enables faster and more accurate distribution of supplies to refugee campsThe UPS Foundation, the philanthropic arm of UPS (NYSE: UPS), today announced the launch of the UPS Relief Link program to help improve the lives of displaced refugees around the world through optimized distribution and tracking of critical supplies in crisis-affected areas. - 7 years ago

Press Release / New warehouses to provide 900 women access to higher market prices for their shea&nbsp;HERSHEY, Pa., Mar 25, 2015 &nbsp;-- The Hershey Company HSY, +0.99% announced today its partnership with IOI Loders Croklaan, a global shea butter supplier, to fund the construction of three warehouses in Northern Ghana that will impro - 7 years ago

Press Release / Avery Dennison and Belgian-based Seliplast AG (acronym for Second Life for Plastics) have launched a first-of-its-kind recycling option for label matrix waste made of polypropylene and polyethylene. The programme is now available to converters in Belgium, Netherlands, Luxembourg, Germany and France.&nbsp;This new offering builds on a 2014 pilot established by the two companies in which more than 1,000 tons of plastic laminate and matrix waste in Avery Dennison’s plant in Turnhout, Belgium were converted into new granulate for industrial and household products. The solution eliminates the need for waste material to be shipped outside of the region for manual sorting and recycling, which had previously been required due to the sticky nature of the residue.&nbsp; - 7 years ago

Press Release / What if we could redirect&nbsp;plastics from landfill and use them to create innovative materials, and then put them in the all-new Ford F-150, part of Ford F-Series, America’s best-selling truck?​ We could make a big difference. - 7 years ago

Press Release / $2.2 billion in sales; $168 million for members; $8 million for outdoor accessToday, leading outdoor retailer&nbsp;REI&nbsp;announced that it is sharing more than ever with the outdoor community through its annual dividend, returning $168 million to its members1. In 2014, 945,000 new members joined the co-op, taking active membership to a high of 5.5 million. The co-op reported record annual revenues of $2.2 billion, a 9.9 percent increase from 2013. - 7 years ago

Press Release / &nbsp;Being socially responsible is business as usual for us at AT&amp;T, and we weave it into everything we do. So today, for the fourth year in a row, we want to recognize several suppliers who have really taken to heart our call to action for sustainable operations. These companies have contributed innovative solutions toward our sustainable operation efforts. &nbsp; - 7 years ago

Press Release / SAN FRANCISCO, CA – March 2, 2015 – Across fresh food supply chains, businesses are advancing environmental, social and economic values. Balancing production with continually improving conservation stewardship demands an aligned approach to measure and communicate on-farm sustainability in specialty crops (all fruits, nuts, and vegetables). The Stewardship Index for Specialty Crops (SISC) and The Sustainability Consortium® (TSC) are proud to announce a partnership that creates significant progress toward these goals. TSC and SISC have agreed to work toward harmonization of on-farm performance metrics and collaborate together on implementation and innovation projects to encourage stewardship across specialty crop supply chains. - 7 years ago

Press Release / Kingsport, TENN., March 9, 2015&nbsp;– Eastman Chemical Company (NYSE:EMN) announced today that it has been recognized by the Ethisphere Institute as a&nbsp;2015 World’s Most Ethical Company®&nbsp;for its efforts to continually raise the bar on ethical leadership and corporate behavior. - 7 years ago 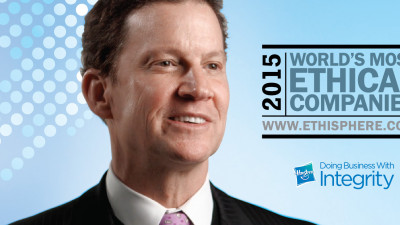