Sustainable Brands
Published 3 years ago. About a 5 minute read.

Growing consumer awareness and pressure has pushed plastic waste to the forefront of sustainability concerns, prompting numerous commitments to reduce single-use plastics, more efforts to combat marine plastic pollution, and the adoption of a bottle deposit scheme in the UK, to name a few.

Last week, Nestlé announced it had finally set a goal to make 100% of its packaging recyclable or reusable by 2025. It’s better late than never, and once implemented, such packaging changes from such a large global company could have a major impact.

“In order to make meaningful and credible commitments, we first need to understand where we need to place our focus, and what organizational capacity is needed to deliver against them. We feel strongly about not making commitments without being serious about meeting them,” Nestlé sustainability expert Duncan Pollard told Confectionary News.

“Because of the size, scale and complexity of our business operations, and the different types of packaging that we use, it has taken us a little more time than we would have liked to determine the shape and nature of our efforts to address the issue of plastic packaging, and the commitments we need to make to keep us on this path.”

But efforts to eliminate single-use plastic and corporate commitments to use recyclable packaging are only some of the ways we can chip away at the plastic pollution iceberg. We also have to consider how to deal with the massive amounts of plastic that cannot be recycled – whether due to its quality, our processing capacity, or other challenges – without further harming the environment. To that effect, two solutions have recently come to light in the UK.

A team led by Professor John McGeehan at the University of Portsmouth has created a mutant enzyme that breaks down PET (polyethylene terephthalate) plastic, a material used in many soft drink bottles. They were investigating how a bacterium discovered in 2016 by Japanese researchers had naturally evolved to “eat” plastic. They indeed discovered the detailed structure of the enzyme produced by the bacterium to break down the material, but to their surprise, their tweaks to that enzyme made it even more efficient.

“What actually turned out was we improved the enzyme, which was a bit of a shock,” McGeehan told Edie. “It is a modest improvement – 20% better – but […] it’s incredible because it tells us that the enzyme is not yet optimised. It gives us scope to use all the technology used in other enzyme development for years and years and make a super-fast enzyme.”

Their research, published in Proceedings of the National Academy of Sciences, suggests that the enzyme could enable a way to recycle clear plastic bottles back into clear plastic bottles, which would significantly support the move towards a new plastics economy by improving the circularity of PET.

“What we are hoping to do is use this enzyme to turn this plastic back into its original components, so we can literally recycle it back to plastic,” McGeehan said. “It means we won’t need to dig up any more oil and, fundamentally, it should reduce the amount of plastic in the environment.”

The altered enzyme takes a few days to start breaking down the plastic – far faster than the centuries it takes in nature – but the researchers are optimistic this can be sped up even further and become a viable large-scale process. Industrial enzymes widely used inwashing powders and biofuel production, for example, have been made to work up to 1,000 times faster in a few years.

The team’s findings echo previous discoveries such as that of the Canadian scientists behind BioCellection, who found they could genetically engineer bacteria that can break down plastic 80 times faster than a naturally occurring bacteria, and the research team from China and Stanford University who found that certain mealworms can eat a diet exclusively of polystyrene, also known as Styrofoam.

Meanwhile, a startup called MacRebur is replacing part of the bitumen in asphalt with recycled plastic to make better roads.

The MR products are all made from 100% recycled plastic materials. Waste plastic pellets are fully melted into the bitumen within the asphalt mix, preventing any microbeads from being in the mix. In fact, MacRebur claims that roads made with its products leach less bitumen into rivers and streams than conventional roads do.

The patent-pending products are mixed in at the same time as the aggregate and bitumen are at the asphalt plant, so there are no modifications to plants required. MacRebur offers single dose bags and loose bulk loads to allow easy distribution throughout asphalt plants via manual systems or automated silos.

The UK-based startup has raised over £1m of investment and received honors such as winning the Virgin Media Business Voom competition. 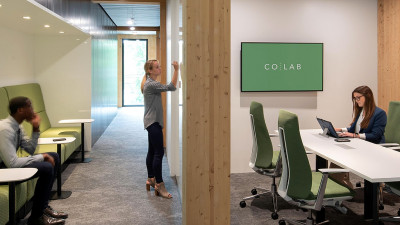 FROM PURPOSE TO ACTION: BUILDING A SUSTAINABLE FUTURE TOGETHER
Are you ‘Looped In’? Circular Economy Leaders Share Their Latest Solutions