Sustainable Brands
Published 4 years ago. About a 4 minute read.

Plastic packaging continues on its downward spiral as supermarkets, government and even the Queen begin to explore more sustainable alternatives.

Kiwi supermarket chain New World is setting a new standard for the food industry by drastically reducing the amount of plastic packaging stocking its shelves.

A new refrigerated shelving system is being piloted at the chain’s Bishopdale, New Zealand store, which allows New World to display fresh produce without plastic packaging. Dubbed “Food in the Nude,” the project rolled out in January 2017 and New World Bishopdale has already begun to reap the benefits. Over the last year, the grocer has seen a significant reduction in the amount of food waste produced by its produce department. “The system does such a great job of keeping everything fresh,” Nigel Bond, owner of New World Bishopdale told SUPERMARKETNEWS.

The new system works by misting fruits and vegetables with water to keep them fresh. “Vegetables are up to 90 percent water and studies have shown that misted produce not only looks better and retains it color and texture, it also has a higher vitamin content,” Bond added. “We’ve also installed a reverse osmosis system that treats the water by removing 99 percent of all bacteria and chlorine, so we are confident that the water we’re misting with, remains pure.”

The move builds on the store’s existing efforts to respond to consumers’ growing awareness of environmental issues, such as its decision to stop using plastic bags by the end of 2018. New World is also exploring ways to work with its suppliers to eliminate unnecessary plastic packaging throughout the supply chain.

Beyond reducing the chain’s food waste and packaging footprint, the new system has also garnered considerable customer support. “In my 30 years in the supermarket industry, this simple change has resulted in the most positive feedback from customers that I have ever received,” Bond said.

Meanwhile, a new bill being proposed in California is putting single-use plastics on alert. The bill specifically targets plastic straws and would make it illegal for restaurants to provide them to customers unless specifically requested. Failure to comply with the new rule could potentially result in penalties such as a fine of up to $1,000 or even jail time.

While the bill is not an outright ban, government officials believe it has the potential to help shift consumer attitudes and spark conversation around single-use plastics. According to USA Today, straws were one of the most prominent pieces of trash collected during California’s Coastal Cleanup Day between 1989 and 2014.

“AB 1884 is not a ban on plastic straws,” said Ian Calderon, the Democratic assemblyman who proposed the bill. “It is a small step towards curbing our reliance on these convenience products, which will hopefully contribute to a change in consumer attitudes and usage.”

Calderon isn’t the first to attempt to address the issue — cities such as Davis, Calif. and San Luis Obispo, Calif. already have similar straw ordinances in effect.

Queen Elizabeth is also doing her bit to tackle the plastics problem — according to reports from The Independent and The Telegraph, single-use plastics such as straws and bottles will henceforth be banned from Buckingham Palace.

While The Prince of Wales has spoken frequently about the damaging effects of plastics on ocean health, the Queen’s piqued interest in plastics has largely been attributed to Sir David Attenborough, with whom she recently worked on a wildlife conservation documentary.

“Blue Planet’s reach now extends to the Royal households and shows how much momentum is building behind the war on plastic pollution,” Julian Kirby, campaigner for Friends of the Earth, told The Telegraph.

The new measures will be rolled out across Buckingham Palace, Windsor Castle and the Palace of Holyroodhouse in Edinburgh, where only china glasses and plates, as well as recycled paper cups, will be permitted. Royal Collection cafes will also be required to use compostable or biodegradable packaging.

In addition to tackling plastic waste, plans have also been announced to dedicate £369 million to energy efficiency improvement projects at Buckingham Palace. Projects include the installation of solar panels and an anaerobic digestion system that will generate biogas from waste. 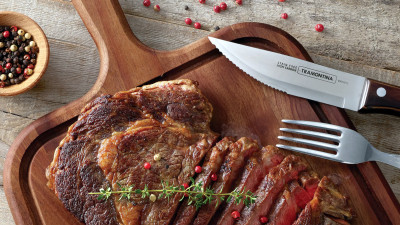