Sustainable Brands
Published 2 years ago. About a 5 minute read.
Image: RitaE (via Pixabay)

Businesses and manufacturers will pay the full cost of recycling or disposing of their packaging waste, under a major new government strategy unveiled late last month by the UK’s Department for Environment, Food and Rural Affairs (DEFRA).

The move will overhaul the nation’s waste system and establish extended producer responsibility (EPR), putting a legal onus on those that continue to produce waste to take greater responsibility and foot the bill.

DEFRA’s ambitious new Resources and Waste Strategy — the first comprehensive update in more than a decade — will eliminate avoidable plastic waste and help leave the environment in a better state than we found it for future generations.

Producers will also be expected to take more responsibility for items that can be harder or costly to recycle including cars, electrical goods and batteries.

How to engage consumers as suppliers in a circular economy

Hear more from BBMG, eBay and Williams Sonoma on activating consumers as the critical ‘missing link’ in emerging circular models around clothes, footwear and other CPGs at SB'21 San Diego — October 18-21.

Households will also see the existing complicated recycling system simplified, with new plans for a consistent approach to recycling across England. Timings for introduction will be subject to discussions at the Spending Review.

“Our strategy sets out how we will go further and faster, to reduce, reuse, and recycle. Together we can move away from being a ‘throw-away’ society, to one that looks at waste as a valuable resource. We will cut our reliance on single-use plastics, end confusion over household recycling, tackle the problem of packaging by making polluters pay, and end the economic, environmental and moral scandal that is food waste.

“Through this plan we will cement our place as a world leader in resource efficiency, leaving our environment in a better state than we inherited it.”

To help further boost recycling levels, the government will introduce consistent set of recyclable material for collection, subject to consultation. EPR will see industry pay higher fees if their products are harder to reuse, repair or recycle and will encourage sustainable design, subject to consultation. EPR for packaging will raise between £500 million and £1 billion a year for recycling and disposal.

The move builds on the Autumn Budget, which announced a world-leading tax on plastic packaging which does not meet a minimum threshold of at least 30 percent recycled content, subject to consultation, from April 2022. This will address the current issue of it often being cheaper to use new, non-recycled plastic material despite its greater environmental impact.

The Resources and Waste Strategy sets out how the UK government will:

The strategy sits alongside the government’s 25 Year Environment Plan and the recently published Bioeconomy Strategy; and the Clean Growth Strategy, which sets out how the UK is leading the world in cutting carbon emissions to combat climate change and driving economic growth.

“The government has listened to industry and these steps have the clear potential to dramatically change the way the sector operates to increase recycling and recovery rates,” said Richard Kirkman, Chief Technology and Innovation Officer at Veolia, which recently [partnered with Unilever](<a href=) to develop technologies that will help create a circular economy for plastics across various geographies, starting in India and Indonesia. “With consistent collections and advanced facilities like this at Southwark, more recyclable materials can be collected for reprocessing into new products. As a business, we are ready to invest, to take advantage of new technology, build more infrastructure and work with brand owners and local authorities to harness resources on an industrial scale. It’s the direction we have been hoping and waiting for, and with the public and businesses playing their part, the UK can build a sustainable future.”

“With 80 percent of a product’s environmental impact determined at the design stage, this Strategy is a welcome step forward in that it moves the focus of England’s resources and waste policy beyond just recycling and towards the early stages of a product’s lifecycle,” said Nick Molho, executive director at Aldersgate Group, an alliance of leaders from business, politics and civil society that drives action for a sustainable economy. “We welcome in particular the intention to consult on new rules for extended producer responsibility schemes, the plan to broaden their scope to include a wider range of products as well as the intention to introduce product standards setting minimum resource efficiency criteria, which together could have a significant impact in improving the quality of products put on the market."

“It is great that the Government is making recycling easier — and that they are finally asking producers to pay the cost. But that alone won’t cure our plastic plague,” asserted Dr Lyndsey Dodds, Head of UK Marine Policy at WWF, which recently partnered with Tesco to reduce the environmental impact of the average UK shopping cart by 50 percent. “Eight million tonnes of plastic are dumped in the ocean every year and only 9 percent of all the plastic produced globally is recycled, so there is no way we can tackle this through recycling alone; we must reduce the amount produced and used. We need the Government to follow through on this Strategy with strong and urgent action to turn the tide on plastic — before it is too late.”

Greenpeace also expressed concern about the timeline of the new Strategy, along with a few other components. As Alice Hunter pointed out in a recent blog post: “Overall, while there are some very positive and bold measures in the strategy that the Government should be congratulated on, we think that this strategy could have been more ambitious in terms of speed and vision.” On the positive side: “As it stands, [taxpayers] currently have to pay 90 percent of the cost of managing the waste we produce in our homes. Producers, including manufacturers, retailers and supermarkets are only paying 10 percent of the cost to sort out material they brought onto the market in the first place. This is clearly unfair and is a big reason why producers of plastic don’t think as carefully about what kind of material they bring on to the market, in particular how hard it might be to clean up or recycle.”

As for where the Strategy falls short, while Hunter commended the EPR measures and bottle-return scheme, the four-year delay in implementing them is problematic: “These delayed timeframes just mean years more of the status quo – millions more bottles washing up in our rivers and producers being able to keep packaging waste out of sight and out of mind.” She also stressed the need for bolder and more immediate action on ‘problem plastics’ such as black plastic trays and PVC, and a much clearer plan for reducing the amount of plastic industry brings into the system in the first place.

CHEMISTRY, MATERIALS & PACKAGING
The Road to Zero Waste Is Paved with Incremental Changes 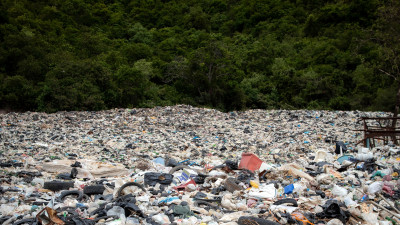