The Next Economy
And then there were 10 …

In the case of the climate crisis, we’re not facing one tipping point, but two. The hard part: These two tipping points would tilt us in opposite directions! But our current situation doesn’t mean it’s game over — it means it’s game on.

Those of us who care about the fate of our world, and its climate, are no exception. We want to know if we’re going to make it. If we’re near a tipping point, we ask: Which way are we likely to tip? Will we slide downward, towards environmental and social crisis? Or will we swing upward toward recovery?

It wasn't until last year’s Special Report on Global Warming of 1.5℃ gave us an actual deadline — 2030, just 12 years ahead — by which we had to have our carbon under control or face irreversible consequences, that the IPCC broke into the mainstream — along with the notion that we had a finite date, a time-frame within which we must accomplish something enormous, or else. In essence, the report suggested, you all have 12 years to hold off the tipping point for the climate. That point, of course, is now just 10 short years away.

Is Carbon Labeling Right for You? Hint: the answer is ‘Yes’

If you are considering carbon labels and wondering if it is worth the investment in time and resources, then this session is for you! Join us on June 9 at Brand-Led Culture Change as brands and organizations at the forefront of carbon-labeling — HelloFresh, HowGood, Just Salad and WRI — share how they got started, the opportunities and challenges associated with this endeavor, and why it has ultimately paid off.

And you know us — we like to think about these questions rigorously, so let’s start with the basics: A tipping point is “the moment of critical mass, the threshold, the boiling point,” after which something — an idea, a product, a belief — takes off, grows exponentially. It is, as Malcolm Gladwell put it, the point where it “spreads like wildfire.”

In the case of our climate, however; we’re not concerned with one tipping point, but two. The first is the point beyond which climate damage and GHGs in the atmosphere will accelerate, pushing us farther and faster where we don’t want to go.

The other is closer to what is usually meant by the tipping point, and what Gladwell focused on: In our case, it’s the point at which beliefs about the importance of protecting the planet begin to gain faster and wider acceptance, and actions that follow from those beliefs become dramatically more widespread.

The hard part: These two tipping points would tilt us in opposite directions! That means it’s critical to know which one is likely to win out. If it’s the downward scenario, we need to mitigate all we can and take action to adapt to a completely new way of life. If it’s the swing back toward normalcy, how much damage will be done before we get there and what do we do about it? 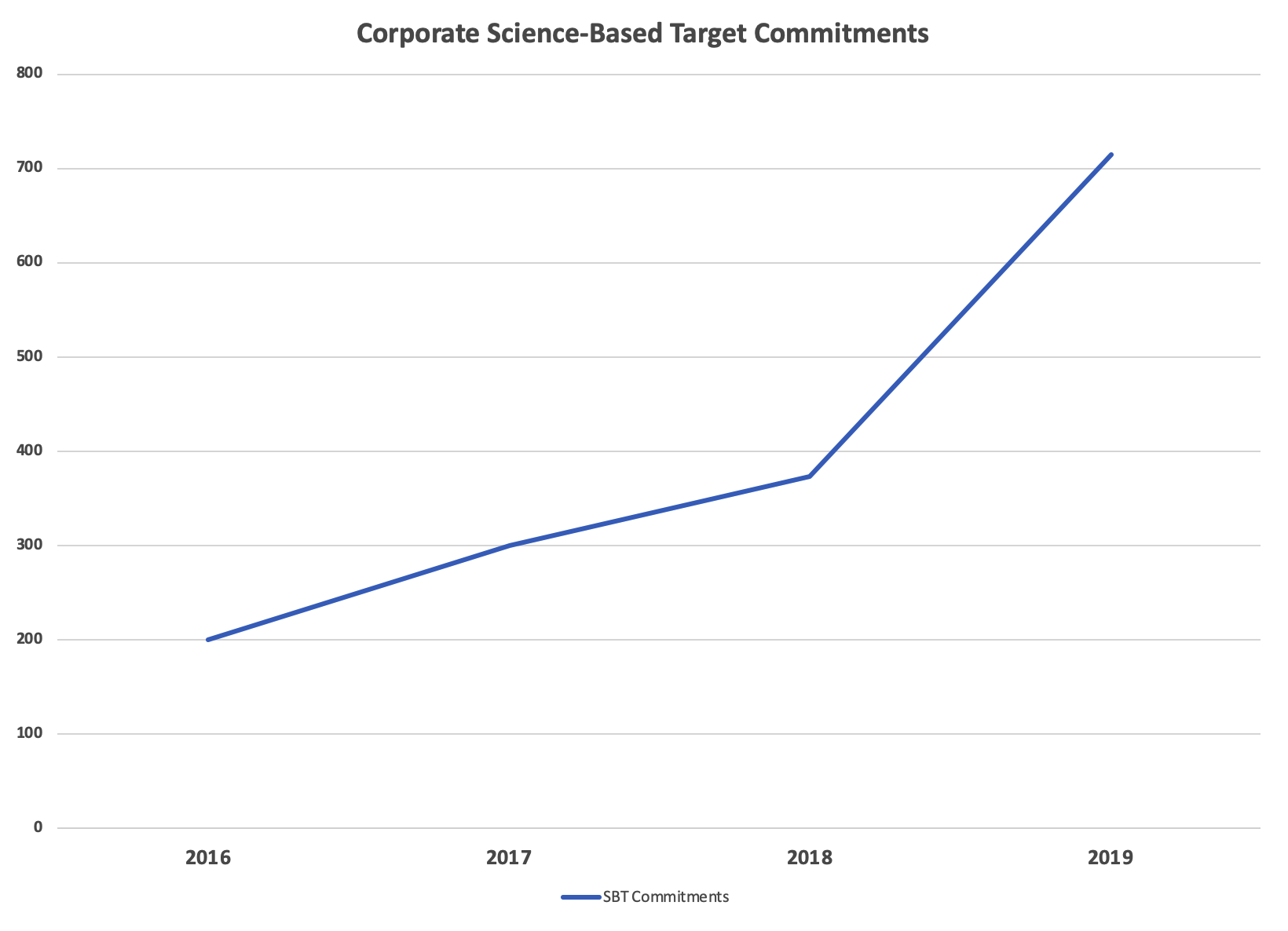 There are things pushing us in the wrong direction, such as accelerating melting of ice and decreasing investment in alternative energy (partially mitigated by falling prices; but we need more investment, not less). And there are things pushing us in the right direction, such as growth in the percentage of the population that thinks it’s important to do something about the climate and in the number of companies that have set science-based targets. Which will win?

It is also making its way into corporate governance: Companies reporting their climate performance to CDP have risen from 220 in 2003 to almost 7,000 in 2018. Yet, for the year following the IPCC Special Report — this year — we are again expected to top the prior year's record for global carbon emissions.

Ten years out from the 2030 deadline and the US is beginning the work of withdrawing from the Paris Agreement. Around 3,500 square miles of Amazon rainforest has been lost to wildfires for agriculture expansion.

Yet we amazing humans, when we measure things and commit to improving them, usually do. Think about the unimaginable improvements in computing power, for example, enabling today’s iPhones to process 3.36 billion instructions per second; versus 5,000 for ENIAC — the room-sized first true computer — in 1945. That’s more than 670,000 times as fast in 75 years. What if we could do that for a sustainability issue?

In just the past few years, as we've reported, there are new methods of tidal energy generation, mini-solar grids in Nigeria, windmills harvesting wind on roadway medians, forest litter used for airplane biofuels, electric current from microbes and from saltwater running over rusty iron. There are utilities using nano-coated salt for renewables storage, permafrost protection experiments using wooly mammoth DNA, and solar panels next to high-tech sails on ocean vessels.

But what does all that add up to, compared with what Vox recently called the “hundreds of gigatons on the way from existing fossil fuel infrastructure”?

So, we're back to asking: Are we going to make it?
There’s a lot not to like about the trajectory we’re on — which just means it’s that much more important for us to change course — now.

To paraphrase Paul Hawken, author of Drawdown, our current situation doesn’t mean it’s game over; instead, it means it’s game on.

Tipping the odds on climate

As noted above, we can — and we must — change the odds that the climate will tip in our favor. We do this both by changing the speed at which new, more sustainable ideas spread; and by changing the rate at which those ideas turn into actions.

The most widely used model describing the spread of innovative products is called the Bass Diffusion Model; after its creator, Frank Bass. In it, adoption is driven both by innovators — those who have adopted the new product or idea, or who tell others about it — and imitators, those who hear about it, some of whom then adopt it (typically between 30-50 percent).

For a sustainability-related example of what this looks like, here are sales figures for the plant-based meat company, Beyond Meat, since 2016. When we add a trendline, you can really see that we’re in the exponential-growth phase of adoption: 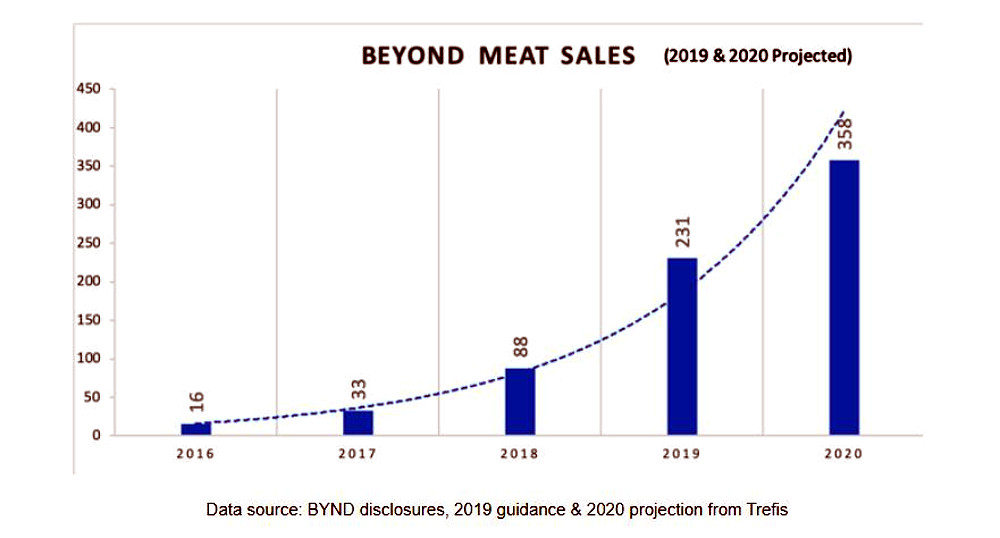 This is in contrast to the growth pattern of CDP disclosure, which has been very robust but much more linear: 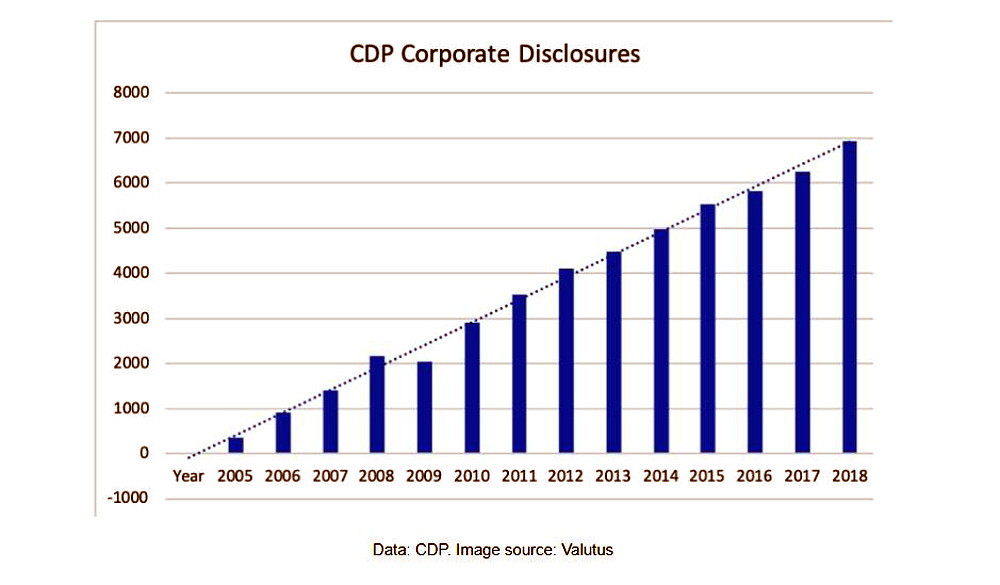 Obviously, we need whatever positive growth we can get, but it’s critical to have more of the exponentially growing good stuff. rIs there enough of that good stuff? Sometimes it doesn’t seem so — but maybe there’s a lot more than we see. One recent example brought this home to me.

I'm pretty engaged in the issue of plastic waste. I've given presentations at SB Oceans, SB New Metrics '19, and the Ellen MacArthur Foundation’s Disruptive Innovation Festival. I've led the creation of the True Plastic Impact standard (now being used by a billion-dollar consumer goods company), been part of the Ocean Plastic Leadership Summit; and penned articles about it.

And yet, even I only found out a couple of months ago about some fantastic work being done to build collaboration in this area. And recently, I learned for the first time about one of the biggest microplastic pollution datasets.

That gives me hope that there's a lot more out there I don't see. While the bad stuff is big and visible, maybe there’s more of the good stuff than we think.

So, how do we help the good stuff grow, once we find it?

Examining Bass’s model suggests some specific approaches we can take to nudge those growth rates upwards.

OK, but even so, will we make it? Will we shift the balance and do so in time? It’s daunting. But we end up at an approach inspired by Sustainable Brands™: Be courageously optimistic. We choose to be optimistic. This takes courage given the reality of the situation, but we must.

Deciding we’re going to make it is actually powerful, in an unexpected way: It engages the human capacity for creativity. Saying, “We’re going to make it. How?” makes us work backward from success, which opens up new avenues of creativity and generates better ideas.
Then, we have to turn those ideas into actions. Here, optimism is a choice that helps us — and others — to act. Optimism is more energizing than anxiety (though there’s plenty of cause for that) or pessimism. It’s also more contagious, more catalytic.

It’s tempting to say we don’t know if we’ll make it, but it’s better to say we will. We have no choice. We just have to figure out how — then do it.