Algramo’s unique, refillable packaging system allows customers to buy as much or as little of a product as they want, in reusable containers, with no difference in the price per gram — then recycles all packaging at the end of its life.

In recent weeks, the streets of Santiago have been awash with protestors expressing their anger over the cost of living in the city. The high levels of inequality in the Chilean capital and more broadly across the country have resulted in mass upheaval and unrest, leaving the ruling elites struggling to restore public order.

Against this backdrop, it’s perhaps not surprising to understand how successful one circular startup, Algramo, has become since its launch in 2013. Algramo’s purpose is not only to help consumers rethink grocery shopping, but to use its model as a force for social good. In Santiago, that means tackling what Algramo’s Brian Bauer calls the “poverty tax” faced by shoppers on low incomes.

“When you live in the bottom of the pyramid in Latin America, you tend to buy your food from small, family-owned grocery stores,” he says. “People often don’t have money to buy food in large amounts, so they are forced to buy it in small amounts.”

Store owners will repackage bulk staple items such as rice, lentils and cleaning products into smaller packages — so, instead of buying a kilogram of product, a customer might purchase a 250-gram bag.

Bauer works on circular economy and strategic alliances at Algramo. He is helping to scale up the original model, Algramo 1.0, that founder Jose Manuel Moller set up. Moller wanted to not only address these prohibitive prices faced by low-income food shoppers, but enable them to access the right amount of product they required without the need for single-use packaging.

Algramo, which literally means "by the gram," combines a number of circular principles — refill, reuse and optimized reverse logistics. It is basically a refillable packaging system allowing customers to buy as much or as little of a product as they want, in reusable containers, with no difference in the price per gram. Once the containers reach the end of their life, they can be traded in by shoppers for a new container — this deposit ensures packaging goes back to Algramo, for recycling at end of life.

Since its inception, the Algramo 1.0 model has expanded to 2,000 stores in Santiago, reaching roughly 350,000 customers. In 60 of those stores, Algramo has installed vending machines, which automatically dispense the products. In the others, Algramo’s own reverse logistics team visits on a regular basis to stock up product while collecting any empty packaging containers, which are subsequently cleaned and refilled for delivery back to the stores.

“We always strive to offer products that are in demand and used a lot,” Bauer says. “If you’re going to the trouble of doing reuse, you want to make sure you do that with fast-moving products to create more impact.”

Bauer says when the model was first rolled out, initial reuse rates weren’t even hitting 10 percent, but they now stand at over 80 percent: “We played around with the price of the packaging and got people more interested about the benefits of reuse.”

In 2018, these impressive reuse rates attracted the interest of major brands including Unilever and now Nestlé. Interest from global brands has paved the way for Algramo 2.0 — in which, as Bauer explains: “We are taking the technology and distribution systems that we created with the 1.0 model and integrating those into the supply chains of global brands.”

Both models target different markets. Algramo 2.0 is aimed more at middle-income neighbourhoods, and will be built on brand partnerships. The startup is working with Unilever on the first Algramo 2.0 model, which launched in May on the streets of Santiago. It’s a mobile home-refill service selling cobranded Algramo-Unilever products such as laundry detergent and dish soap — the dispensing machine is mounted on an electric tricycle — and can be hailed to your home, free of charge, for onsite refill.

“It’s kind of like an ‘Uber Eats’ service,” Bauer says. “For people in cities who don’t have cars, this creates a compelling value proposition. If you have to walk several blocks to the grocery store, you don’t want to be carrying back heavy items. With us, you can get refill at your house and have transport provided for the bulkier items. This is especially valuable for our next product, Nestlé dog and cat food.”

The system encourages cashless payments through RFID tags on the containers and an app; but until the app is fully developed, tricycle drivers also have the ability to take cash payments and transfer the funds digitally onto the packaging. A ‘sustainable consumption credit’ offers a discount on the next purchase when shoppers bring the containers back, incentivising reuse rates further.

“A key part of the rationale is that, to make reuse popular, you need to lower the product cost — the more the better,” Bauer says. “A lot of evidence I’ve seen says a 30 percent to 40 percent discount is a critical threshold number to get people interested in reusable packaging. You also need to make reuse convenient, and the tricycle provides that.”

Brands who sell through the Algramo system can also expect to see significant cost benefits due to reduced packaging and optimized logistics, enabling them to offer products at a lower price. 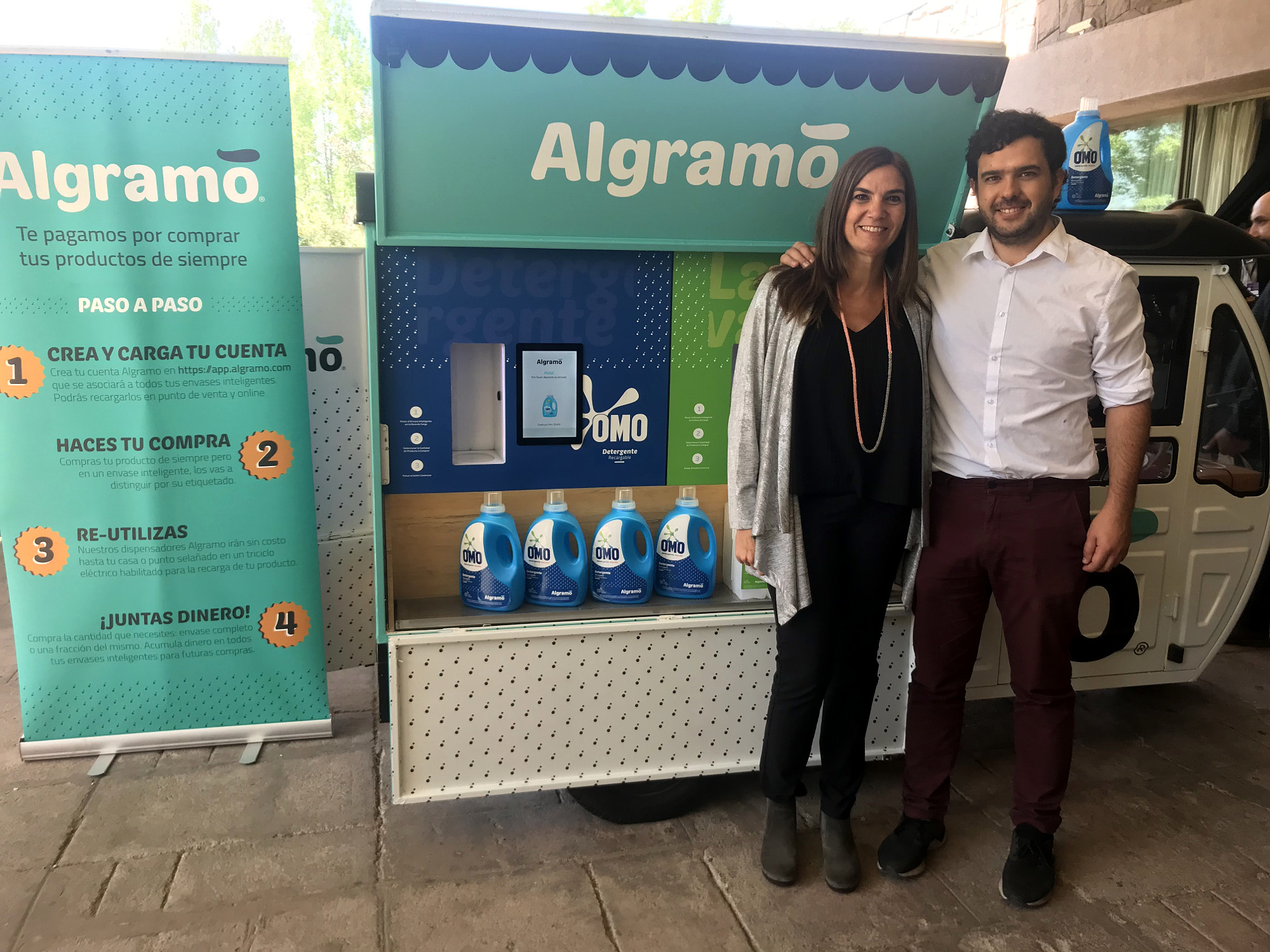 “With our Unilever model, Omo laundry detergent is about 30 percent less expensive then what you’d pay for them in a corporate supermarket at the regular price,” Bauer says. “Brands are excited to be able to lower their product costs, as this gives them a significant competitive advantage.”

Algramo funded the first tricycle and Bauer says Unilever has agreed to fund a further nine tricycles, which should all be on the streets by the end of the year. Going forward, the company intends to expand into international markets — first and most notably, the US — before expanding across Latin America; Bauer says expansion into certain markets will depend on the right implementation partners.

“We have a strategic implementation partner set up for the US, and that is enabling us to move a lot faster than originally planned,” he intimated. “In the second half of 2020, we’re hoping to be in the US. Shortly after that, we hope to enter into other geographies, as well.

“We’re keen to give this opportunity to as many people as possible, in as many countries as possible. In the higher-income markets, that’s where most of the consumption and packaging waste occurs, so we can have a big impact on reducing the plastic footprint there.”

In scaling up, Bauer anticipates a few issues along the way, one of these being co-innovation risk.

“We’re working with a lot of different brands, technology providers, government regulators … and we need them all to be working together optimally and efficiently as possible to ensure the system is robust.”

Circular business models that can deliver both sustainability and social impacts are still thin on the ground, which is what makes Algramo’s proposition so compelling. As Bauer aptly puts it: “What we are doing has never been done before.”