The Next Economy
Never Say Die:
Forging Ahead After the Good, the Bad and the Ugly of 2020

Much of the time, 2020 felt like endlessly rolling a heavy stone uphill day upon day, only to watch it tumble down again. Yet, in truth, we have done good work. We have hauled that boulder farther up the slope, in spite of everything.

The Augean stables. Thor’s drinking horn contest. Prometheus and the eagle. The task of encapsulating 2020 is indeed Herculean.

Still, difficult as is the chronicler’s task, we can only hope we’re less akin to Sisyphus, and need not roll a boulder such as 2020 uphill year after year.

In January we predicted … well, nothing we predicted could account for the all-encompassing, world-shattering COVID-19 virus that crashed economies, trashed social norms, killed almost 2 million people to date — thereby demolishing the hopes of prognosticators everywhere.

Even so, let’s see how our predictions fared.

First, we said in our January PreCap that young people would take over the climate battle. We had just seen the unprecedented, Greta Thunberg-inspired Global Climate Strike; and it seemed full of promise. Yet, how can kids continue to cut school to protest on Fridays when schools are closed and they’re not allowed to gather in large numbers? Still, they made their impact felt. In the recent US elections, for example, NBC News exit polls “suggest that 65 percent of those between the ages of 18 and 24 voted for Biden” — the candidate who embraced climate change as a key issue. That is “11 percent more than any other age group.”

In addition, the youth climate movement now has moved beyond Thunberg; and other young voices are insisting on climate action. Though COP26 in Glasgow — scheduled for last month — was postponed, young people from 140 nations gathered online at their own COP, culminating in a “statement of demands.” The young continue to be on the march.

We predicted that global courtrooms would be deeply enmeshed in climate litigation, in suits brought against petrochemical interests and nations unwilling to go “green” enough. Indeed, Norway’s Supreme Court heard a case brought against the government — although its decision allowed continued North Sea drilling (Denmark, meanwhile, has decided to curtail its oil operations). Lawsuits aplenty have dogged the Trump administration’s relentless dumping of environmental regulation and gutting of the Clean Water Act.

We noted that climate accountability would also take place outside the courtroom. We specifically mentioned insurance; and 2020 saw insurance industry stories about climate risk. But 2020 also brought major changes in reporting on sustainability, such as the UK requiring TCFD reporting economy-wide by 2025.

We asserted that the US presidential election would be fought partly on climate change policy; and it was indeed among the top three issues noted in exit polls, considered by two-thirds of voters to be a serious problem. Climate, coronavirus and the economy topped the list.

The virus, of course, was tops; but we’ve noted elsewhere how climate has continued to be a central issue for individuals, even as COVID-19 raged around the world. As the Washington Post noted: “Two big issues dominated the 2020 election: the economy and the coronavirus pandemic. But voters concerned about climate change still helped Joe Biden win the White House.”

We suggested that demand for plant-based meats would continue to skyrocket; and, for once, the pandemic gave this prediction a boost. The notion that COVID-19 likely arose from animal meats, and that US packing plants were virtual super-spreaders, apparently led many to try going plant-based during the crisis.

Innovator Impossible Foods went international for the first time in 2020; and “sales of the plant-based meat are displacing animal-derived meat sales,” according to an analysis commissioned by the company. Meanwhile, Beyond Meat’s second quarter net revenue (the first full quarter of the pandemic) rose by 69 percent, beating expectations — in spite of plummeting restaurant revenue due to COVID.

Finally, we forecast that carbon emissions would continue to rise over the next two decades due to international reluctance from the US and China to engage with climate change. We were wrong; carbon emissions fell in 2020 — but for all the wrong (pandemic- and wildfire-related) reasons. 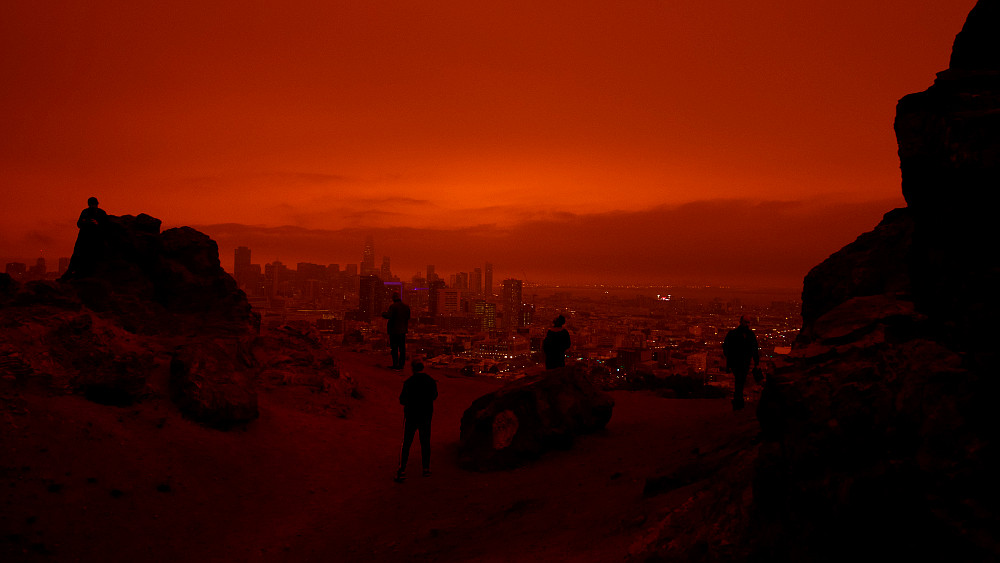 Unsplash users voted this stunning image of the red skies over San Francisco, thanks to this summer's devastating wildfires, Photo of the Year for 2020. Its selection shows that climate is top-of-mind, well beyond the sustainability field. | Image credit: Patrick Perkins

Much of the time, 2020 felt like endlessly rolling a heavy stone uphill day upon day, only to watch it tumble down again. Yet, in truth, we have done good work. We have labored and we have hauled that boulder farther up the slope, in spite of everything.

Aside from our prognostications, we at Valutus published another 60+ articles and papers during 2020. Some were simply about cool and useful innovations, others about critical, social upheavals and trends — but all were woven into the fabric of this turbulent, tragic, but nonetheless hopeful year. Here are the top 10.

Submerged risk – and the risk of being submerged

We wrote a lot about risk this year (more below); but in Atlantis, we noted the consequences of sea level rise are much bigger and broader than commonly thought — such as $14 trillion in infrastructure damage and over 4,000 miles (6,400 km) of fiber-optic cables so crucial to internet and data traffic.

As a world, we face not one tipping point but two – an environmental tipping point and a social tipping point, where action takes off. In this article, we explored the dynamics of tipping points, the diffusion of change; and we showed graphic examples of the difference between linear and exponential progress.

Early in the year, we took note of the companies that are catalyzing others, companies such as Danone, Microsoft, Nestlé, Ernst and Young, and other organizations, large and small, that committed to world-leading goals.

We wrote about the conditions making more cyclones more frequent and powerful, then watched as there were more named storms in the Atlantic — and more US natural disasters with price tags over $1 billion, and more acres burned by wildfires in California — than ever before.

Climate forensics and attribution are bringing GHGs into courthouses and creating the specter of legal liability. While lawsuits to date haven’t had much success (as we noted above), the same was true of tobacco suits – until that changed.

In 1970, Milton Friedman said the sole responsibility of business was to make a profit, “so long as it … engages in open and free competition without deception or fraud.” Fifty years later, we talked back to him, pointing out the “deception and fraud” involved in turning a blind eye to the real value of the environment and society.

We wrote a lot about women this year, including a special issue of our newsletter devoted just to issues of gender equity – in business, education and government. But we’re especially proud of our article on RISE — our metric (and associated tool) for assessing gender equity — which lists the six key dimensions to include (including ones missed by traditional measures).

The ends of odds

We wrote a lot about risk this year, but our most ambitious effort was upending the traditional ways of understanding risk. In our article, we show what’s wrong with the usual way of thinking about risk and provide examples of how it should be done (we even threw in a sneak peek at our risk dashboard tool).

Of course, COVID-19 dominated much of our year, as it did for the world. We wrote about what it meant for foresight and planning, helped launch the COVID Covenant, and hosted webinars about the reset required. But our top article on it was our piece about how COVID showed that we are bankrupting nature. We think it brings a different, more systemic perspective to this critical topic.

The Value of Values

Valutus has always been about value and values. They share the same root (that’s where the name Valutus comes from), but the idea that values have value still hasn’t caught on like it should. That’s where my new book, The Value of Values, comes in, and why we published a summary/preview of it.

Valutus
The Next Economy