Finance & Investment
Sea Change:
How to Spark Sustainable Innovation in an Old-School Industry

Many people and organizations, as well as broad market and social trends, contributed to sustainable seafood’s arrival at this place. Everyone who engaged helped build the network; and because they did, our oceans and plates are going to be healthier.

Today, sustainable seafood is an exciting innovation field, with the potential to improve ocean health while ultimately remaking the $390 billion global seafood industry. To name just a few signs of change: Underwater sensors, robots, cameras and big data tools are creating an Internet of Fish. Algae is shedding its green-slime image and becoming a glamorous super-ingredient. Oyster farming is surging back to life as an economic engine and environmental asset, and traceability and transparency solutions are giving seafood buyers a much-needed look at the journey from water to plate.

None of this was happening when we launched Fish 2.0 in 2013. And few saw it coming, given the historically slow rate of change in the seafood industry and its complex, often low-tech global supply chain. We believed, though, that progress would accelerate if we could remove barriers to innovation: Neither investors nor entrepreneurs had the knowledge and networks they needed to get promising ideas off the ground and move needed capital into the sector.

Happily, we were right. Now a global network that connects entrepreneurs, investors and experts, Fish 2.0 helped power a steep rise in both the level and pace of innovation in sustainable seafood. It’s also created a perception of the industry as a place where innovators can build thriving companies that deliver environmental and social benefits. And as we built Fish 2.0 over the past seven years, we learned five key lessons that form a framework for jump-starting sustainable innovation in any industry.

1. You get what you design for.

Fish 2.0 was designed to create connections: On the surface, it was a business competition, but each element under the skin served to bring all the participants together to grow the sustainable seafood sector. Those who give time, expertise and connections to others are rewarded and invited back. “Takers” who do not contribute to the network and just seek personal gain are actively excluded. The result is a network so valuable that it’s now the main draw — we stopped calling Fish 2.0 a competition last year.

Accelerator and incubator programs are an important part of the innovation landscape, but they can’t create large-scale change. Their necessarily smaller cohort sizes (usually 10–20 companies, maximum) cannot allow broad participation or build general awareness. Those who apply but are not accepted rarely receive specific feedback from investors, so may end up frustrated by the application process. Also, accelerators and incubators are necessarily place-based — the best ones provide in-depth training and mentoring that requires entrepreneurs to relocate for several months at a time.

Fish 2.0 was designed to operate online, allowing busy entrepreneurs anywhere in the world to participate in their own time zones and schedules. Because of this design, we’ve been able to work with 588 entrepreneurs from more than 40 countries, each of whom has received expert feedback from investors, impact advisors and business leaders.

We also designed investor participation with efficiency in mind. Our online judging portal allows busy investors to share their expertise easily, anonymously and candidly. As a result, 388 investors and experts have volunteered their time as advisors and judges to help sustainable seafood entrepreneurs develop their businesses. Investors with no seafood experience were encouraged to participate as a way to learn about the sector while sharing their business expertise; and eventually, several wrote their first checks to businesses in the sector.

3. Plan for success, not mediocrity.

When we created Fish 2.0, the targets people encouraged us to plan for seemed too modest. We wanted to drive major change and needed to scale Fish 2.0 to do that. Rather than set mediocre goals we were sure we could meet, we were willing to risk falling short of audacious ones. And in most cases, we not only met but exceeded our goals — thanks to help from numerous people in the network who were inspired by our ambitions and encouraged us to think even bigger.

In our first year, 20 businesses from an initial pool of 84 applicants qualified to pitch onstage during the Global Innovators Forum at Stanford, most of them based in the US. This year, 40 businesses from a pool of 151 — based in Australia, Brazil, Indonesia, the Netherlands, Norway, the Pacific Islands, the Philippines, Russia, the UK and the US — will take the stage.

Initially, most Fish 2.0 participants were early-stage companies. Now, the pipeline is more mature and also more able to absorb capital — almost all businesses presenting already have prototypes or products in the marketplace. You can see this progress in the funding levels: Investors have put at least $300 million into the first three cohorts; and $200 million of that went to the 2017 cohort, alone. The 2019 cohort, presenting at the Nov. 5–6 Forum, has the potential to draw even more. That’s partly because over 700 investors are now subscribed to our network and communications, compared with a virtual vacuum when we started.

To fill the knowledge gap in the seafood sector, Fish 2.0 has produced 27 investor briefs on topics ranging from algae products and aquaculture technology to traceability and tuna. We learned that our audience is incredibly busy, so we’ve trimmed these down to just one page over time. They’re geared to providing intelligent investors with enough knowledge to start doing their own research.

Additionally, in telling our story through the media, we aimed to get out of our bubble, and worked with mainstream as well as trade outlets. Fish 2.0 has generated — either directly or via network participants — at least 365 articles and broadcasts focused on seafood innovation and sustainability.

5. Find partners who bring something to the table and really work with them.

Partnerships have been essential to expanding and enriching the network — and in every case, we’ve sought and benefited from their expertise. In the current cycle we began working with NOAA, which supported workshops across the country at three locations with aquaculture centers and labs. Our partnership with the University of North Carolina at Wilmington links Fish 2.0 participants to a hotbed of oyster technology development. Longtime support from the US Department of State allowed us to help the Pacific Islands advance their seafood economies, and our new partnership with Australia’s Fisheries Research and Development Corporation hooked us into that country’s highly innovative seafood sector.

It’s also important to find funders who share your objective and provide flexibility around how you get there. The David and Lucile Packard and Gordon and Betty Moore foundations have supported Fish 2.0 from our earliest concept stage and given us freedom to experiment with the design as we grew, without judgment around the failed trials we experienced along the way. This helped us learn the lessons described here and many more that contributed to our current success.

The door is open

Looking at the sustainable seafood sector now, I see potential for even faster progress and greater influence on the entire industry.

Entrepreneurs and investors who have built and run companies before are bringing their expertise to seafood, applying technologies and processes from other fields to seafood’s challenges. The sector is benefiting from advances in agtech, for example, which is spawning new technologies and systems for fish farms. Aquaculture, in general, has made big leaps forward — land-based aquaculture used to be viewed as a fantasy; now it has a firm spot in our food future. The development of high-quality underwater cameras and sensors has literally opened our eyes to what’s going on under water; and these technologies, along with robotics, are enabling a new generation of traceability and transparency solutions.

Many people and organizations, as well as broad market and social trends, contributed to sustainable seafood’s arrival at this place. Fish 2.0’s role was to open the door and bring people together. We’ve found that when you show people a compelling opportunity, they want in. Everyone who engaged helped build the network; and because they did, our oceans and plates are going to be healthier. 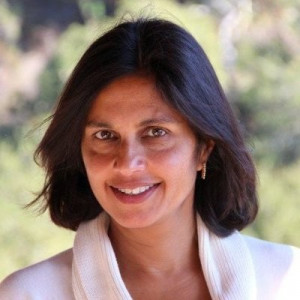 Monica Jain is founder and executive director of Fish 2.0 — a global community that brings innovators together to grow the sustainable seafood sector.

MARKETING AND COMMS
Recycle Your Plastics, Not Your Visuals: A Modern Marketer’s Guide to Sustainability
Advertisement