Mark McElroy
Published 5 years ago. About a 6 minute read.

The question remains of how best to assess the sustainability of whole economies. If existing measurement models such as GDP, ISEW and GPI focus on size or welfare, then we need a third class of models – one that makes it possible to measure the sustainability performance of economies.

Gross Domestic Product (GDP) has long been debunked as a measure of human welfare. Indeed, GDP is a measure of the size of an economy and nothing more. As Diane Coyle put it in her terrific 2014 book, GDP – A Brief but Affectionate History: “It is important … to be clear that GDP is not and [never was] intended to be a measure of national welfare. Economists have repeatedly cautioned themselves and others not to get the two [size and welfare] mixed up.”

The debate over the relevance of GDP to sustainability and corporate social responsibility (CSR) has thus been framed in these terms: size versus welfare or well-being. Is the size or growth of an economy in terms of GDP a proxy measure or indicator of the welfare of the population involved? And should the contributions of individual organizations to GDP, in turn, be regarded as indications of their own sustainability or CSR? And whether yes or no, how can we assess the sustainability of whole economies in the first place – not their size or their correlations to human welfare, mind you, but their sustainability performance?

Several alternatives to GDP have been put forward over the years as better alternatives for assessing welfare. They include the Index of Sustainable Economic Welfare (ISEW), the Genuine Progress Indicator (GPI), Gross National Happiness (GNH), the Human Development Index (HDI), the so-called “Green” or Comprehensive Net National Product (NNP), and many others. Importantly, these alternatives to GDP either (a) also quantify the size of economies in their own ways, or (b) do not quantify the size of economies at all and instead rate or rank them in their own fashion.

All of this gives rise to a new way of measuring and reporting the performance of whole economies that I call Aggregate Capital Sufficiency, or ACS – a logical extension of the dawning of multicapitalism, a new economic doctrine or form of capitalism that interprets performance in terms of impacts on all vital capitals (natural, human, social, etc) and not just one of them (economic). Thus, unlike GDP, which is fundamentally monocapitalistic in its orientation, ACS by contrast is multicapitalistic – a creature of multicapitalism. And just as this doctrine can be applied at the level of individual organizations, so can it be applied at the level of whole economies.

Figure 1 provides a quick illustration of how ACS might work in practice. Using MultiCapital Scorecard data taken from three companies in a fictitious economy (and also knowledge of their respective contributions to GDP, or gross margins), we can calculate the sustainability performance of the economy itself in the aggregate. And we can do so in a way that is context-, capital-, science- and ethics-based and which cuts across the triple bottom line in all of its dimensions. 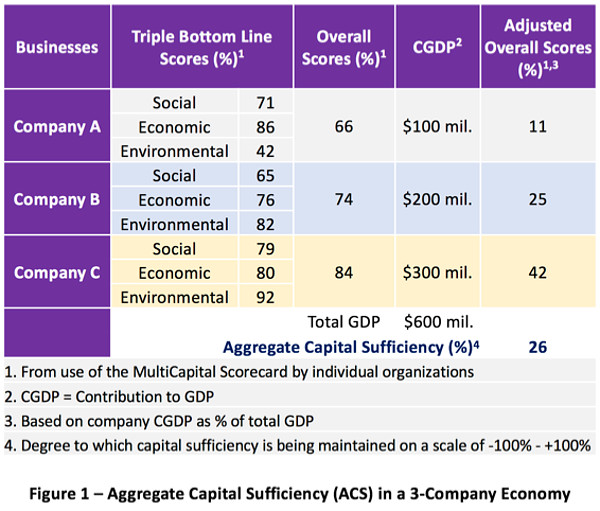 In the example shown, ACS has been calculated at 26 percent. In order for an economy to be fully sustainable, it would have to score 100 percent. Anything less is an indication that the sufficiency of vital capitals has been allowed to run down or is not being actively maintained. The preservation of natural capital, for example, will usually be achieved by not exceeding its rates of renewability; other capitals such as human, social, economic and constructed capitals are anthropogenic: We maintain them by continually producing the resources involved at required or sufficient levels. At Cabot Creamery Cooperative, a leading practitioner of Context-Based Sustainability, this context-based, multicapitalistic philosophy is neatly summed up in what it refers to as the “Cabot Credo”: Living Within our Means & Ensuring the Means to Live!

What ACS makes possible, then, is the ability to measure and report the sustainability of an economy, not just its size or its inhabitants’ well-being. In that regard, it does not compete with GDP, GPI, HDI, etc, since it does not set out to measure economies in those terms. By the same token, none of the other existing macroeconomic measurement models are designed to assess the sustainability performance of economies in capital- and context-based ways. By aggregating the performance of all organizations in an economy relative to the carrying capacities of vital capitals, ACS makes it possible to assess macroeconomic sustainability performance in ways that no other method can. This is Context-Based Sustainability taken to the next level, a measurement model that finally provides us with an alternative to GDP that really does measure the sustainability of commerce writ large.

Where ACS goes from here

There is much to do in terms of researching and further developing the implementation of this idea, but the groundwork has already been laid. Most important is the way in which individual organizations can and should measure and report their performance in terms of impacts on vital capitals, and the manner in which they can do so in context-based ways. Progress made in the development and now open-source availability of the MultiCapital Scorecard, in particular, is a key step – all organizations should use it. Indeed, the ability to assess the sustainability of economies at the macro level depends on the extent to which organizations, too, are doing so at the micro level with regard to their own operations. So, let the R&D begin!

Note: The ACS method described above is a direct extension of the MultiCapital Scorecard (MCS) method co-developed by Mark McElroy and Martin Thomas, and which is otherwise designed for use at the organizational level only. The approach recommended in the MCS for consolidated reporting can arguably be applied at the macro-economy level, too, which is what McElroy has done here. Special thanks go to Martin Thomas for the role he played in inspiring this idea and in helping to develop the performance accounting principles that lie behind it.