As increasing numbers of organisations make sustainability commitments, transparency around how they are progressing reiterates how hard it can be to turn ambitions into reality. There are many reasons for this; however, a common denominator for those at the start of their sustainability journey is often a lack of internal understanding and desire to change.

As increasing numbers of organisations make sustainability commitments, transparency around how they are progressing reiterates how hard it can be to turn ambitions into reality. Yesterday, Unilever reported mixed progress towards achieving its ambitious Sustainable Living Plan goals; and in the past week, Amazon was both accused of pulling back on its 100 percent renewables goal and challenged by thousands of employees to get serious about climate change.

There are multiple reasons for this, and long-term targets are always subject to evolution. However, a common denominator for organisations at the start of their sustainability journey is often a lack of internal understanding and desire to change. At Forster, we believe it’s time to turn traditional ways of thinking about employees on their head — organisations need to be seen as communities, rather than hierarchies.

By thinking of a business as a community, employees can be recognised as individuals, instead of as their roles or levels. We can cut through departmental differences, remove siloes and unite people who hold similar views and interests around a shared ambition.

Through our work, we have identified six core employee segments within a business community: Outriders, Storytellers, Followers, Cynics, Self-Assureds and Rejectors. Each is at a different stage of the sustainability journey, and has different barriers and motivators to involvement.

From harnessing the early-adopting Outriders, to engaging the Storytellers so that the Followers will do just that, there are clear communications pathways to get the critical mass needed to create real change. It is possible, and desirable, for employees to move from one segment to another, but turning the Cynics and Self-Assureds into Storytellers can present the most difficult challenge.

Cynics are typically sceptics who will present a challenge when their status quo is disrupted. They don’t like being told how to think and act — but they are often influential, and getting their support can make a real difference. Cynics want the case proven to them and are likely to dig in their heels until they are given an easy way in that doesn’t knock their ego.

Self-Assureds are different in that they are critical thinkers who trust their own instincts. They are not easily led and need to understand an issue on their own terms. When they get it, they will fully support it and can be a powerful communications asset.

Contrary to Cynics, Self-Assureds want to prove the case themselves and are often best involved by invitations to use their knowledge and expertise to make a positive difference to things they — and their nearest and dearest — care about.

Sometimes Cynics and Self-Assureds are so influential that you will want them to join the Outriders and help shape and own the programme from the start. Sometimes they need to be reached as individuals as the programme develops and embeds. Whatever the timing, a clear case for support that demonstrates how involvement will benefit them and their personal targets will be critical. There needs to be more incentive for them to be involved than to reject, and the environment in which they operate needs to support their decision.

A good example of how we have helped to achieve this for one of our multinational clients was by involving all of its departmental leaders — who were a mix of Outriders, Cynics and Self-Assureds — to co-produce a campaign around a specific sustainability goal. We started by showing how the activity would help them each to achieve their individual targets — from health and safety to sales. Self-Assureds were able to apply their insights to create the ideas; there was increased buy-in and commitment to achieving the outcomes and, as their improved sustainability credentials supported new contract wins, the Cynics came on board.

It may take many years to get there, but once a sustainability programme is owned by the business, exists at all levels of an organisation and makes employees proud, the critical thing is to remain restless. Communities never stop evolving and Outriders need to continue to push to the next stage so that engagement stays high and progress continues. The results — both in business and social impact terms — will be a constant endorsement of why the sustainability journey is so important. 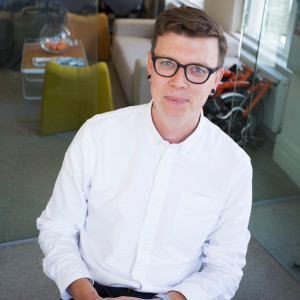 George Ames is Director of Client Services at Forster Communications, based in London.