In what could end up being a swan song for the company, CaterCow has truly put altruism ahead of self-preservation during the ongoing pandemic.

Given that so many of us are in the grip of lockdown, ordering food in rather than eating out, the news that food-delivery service Deliveroo is cutting staff and scaling back was all the more surprising.

The London-based startup, which has operations in 13 countries, is axing around 15 percent of its staff, blaming the public health emergency for putting pressure on the business to reduce long-term costs. But, with healthy revenues following expansion into new markets in 2018, the business is likely to weather the COVID-19 storm.

The fast-food restaurants that fuel Deliveroo are expected to recover. In the UK, the likes of KFC and Nandos are chomping at the bit to reopen as soon as possible, lockdown measures in place or not.

The multiple-block queues of cars waiting for McDonald’s to reopen its drive-thru operations as lockdown measures were eased in New Zealand show just how impatient we are for our fast-food fix. Food companies that serve the general public were always going to survive.

But what about businesses that serve a demographic that has completely disappeared? US-based CaterCow is one of those businesses. It operates in the same way as Deliveroo, Grubhub or Seamless — but, rather than delivering food from restaurants to people’s homes, it takes food from catering companies and delivers it to people working in offices.

Set up by two of Airbnb’s first employees and a former investment banker in 2012, CaterCow has been growing steadily, with more than 2,500 customers across eight cities — including New York, San Francisco, Austin and Dallas. Last year, it celebrated its two millionth meal ordered, naming the likes of Disney, Uber and Apple as key customers. Meanwhile, more than 500 catering partners, including well-known restaurants and chefs, had joined its roster.

The Coronavirus has since decimated the business. With offices closed and social distancing rules in place, CaterCow’s revenues are down 98-99 percent.

A loan from the US Small Business Administration has given the business a three-month stay of execution. And in the meantime, it has taken an interesting pivot — not to chase new revenues, but to put people first in a time of crisis.

“We figured if we’re going out of business, we might as well die trying to make a difference,” says Sean Li, the former investment banker among the co-founders.

The result is CaterCow Cares, an initiative that uses the company’s existing model to send food to hospitals, rather than offices. 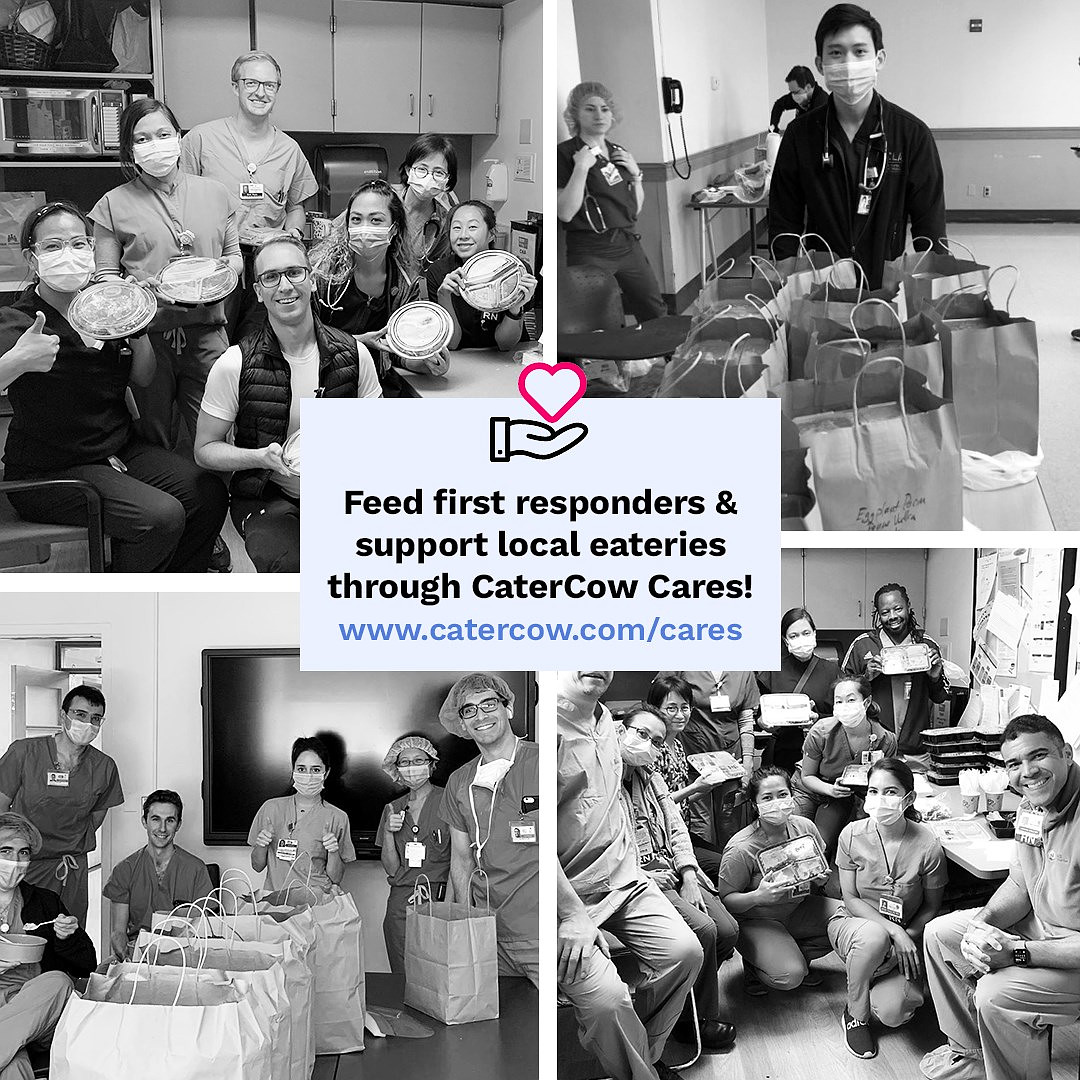 By raising funds to deliver individually packaged meals to frontline healthcare workers, it is giving local restaurants 100 percent of the proceeds. At the time of writing, more than $67,000 has been raised, delivering 4,211 meals to hospitals across the US, and supporting more than 90 struggling restaurants.

“These restaurants are our partners during normal times, so the goal is to keep them alive as long as possible, so they can pay their staff and rent,” says Li, who appears to be taking as much pride in CaterCow’s new reason-for-being as what went before. “We’re not expanding to more cities to serve more hospitals just to increase the numbers. We want to actually do a good job.”

The pandemic has forced many companies to consider their position, shift models, transform products, invent new services and transform to stay alive.

But CaterCow’s pivot is an altogether different proposition, and it was not an easy decision to make. Classic startup philosophy is, you go where there’s revenue — but in this case, there was none, Li says. While some of CaterCow’s competitors have experimented with different revenue streams during the lockdown, the business decided to take the opposite approach.

“Our whole angle for doing this is to help out the hospitals and our partners. We wouldn’t be helping them if we took fees for ourselves,” he explained. “Ultimately, we saw this as an opportunity to help the community, and we’re grateful that people jived with our mission to help.”

Of course, nobody knows what life will be like once we come out the other side. No doubt, office catering will still be a thing. But whether it rebounds to pre-COVID-19 markets levels or not, Li has no regrets — and promises that the philanthropic mission to donate food from local restaurants to those in need will continue.

“Doing CaterCow Cares has been one of the most rewarding projects for me since we founded the company,” Li says. “Hopefully, we will get some karma points from this, and we make it.

“If things don’t pick up again by the summer, I will have to look for more fundraising to keep our business afloat. But if we do make it out, it’s time to celebrate by getting some ice cream and to think about how to rebuild our business and keep on innovating to adapt to the new normal.”

CHEMISTRY, MATERIALS & PACKAGING
The Future of Fashion Is in Biomaterials and Circularity