NetZero’s forthcoming “Mycelium Balls” will put the massive carbon-sequestration ability of mycelium — which can double the environment’s natural carbon-capture rate — into the hands of everyday people.

The world’s brightest scientists agree that we have about 10 years to stop catastrophic climate change.

What many people don’t know is that atmospheric CO2 has a half-life of around 1,000 years. So, even if the entire world switched over to 100 percent clean energy tomorrow, the planet’s average temperature would still continue to rise for another millennium.

“We need to actually draw down massive amounts of CO2 – about 50 gigatons a year now – otherwise, the process will become unstoppable and non-linear,” says Joseph Kelly, the brains behind HiveMind — an organisation that has spent years fighting the climate crisis by working with some of the world’s biggest polluters, such as the fossil fuel industry, to help them stick to their carbon budgets.

He argues that planting trees alone is not going to be enough. “Yes, they are good carbon sinks, but they are not true carbon banks.”

The answer, according to Kelly, is mycelium.

Mycologists have written extensively on the benefits of long-term carbon sequestration associated with the soils of boreal forests as part of our climate fightback. Understanding that boreal forests are scourged by fire as part of their natural life cycles, it has been found that the carbon doesn’t just go back into the atmosphere. Instead, mycelium forms a network under the soil that captures the carbon, even if the trees burn. Suzanne Simard’s 2016 TED talk, “How Trees Talk to Each Other,” explains the process beautifully.

Kelly and his team set out to find a way to harness this process — and they did.

The company’s carbon vault solution uses a blend of mycelium that can sequester a gigaton of CO2e in a site the size of New York’s Central Park. And the drawdown cost is US$35 per metric ton compared to US$100 for mechanical solutions — and it doubles the capture rate.

“Certain types of mycelium form symbiotic relationships with plants under the soil, extending the plants’ root system a thousand-fold and receiving up to 70 percent of the plant’s carbon in exchange,” Kelly says. “This is important for carbon capture, as that carbon stays in the soil nearly indefinitely. It really is the missing link for natural carbon-capture methods.”

Up until now, the company has been focused on selling to big oil, construction and utility companies. It developed a mycelium-inoculated green roof for Shell’s gas stations in London, for example. “But we grew tired of their dithering,” Kelly said.

He recognised that, for his technology to have the biggest impact, projects needed to grow and scale — “and do so in a way that enrolls, rather than alienates, local communities who often lack a voice at the planning table.”

The result of his thinking is NetZero, a company that literally puts the mycelium technology into the hands of everyday people. 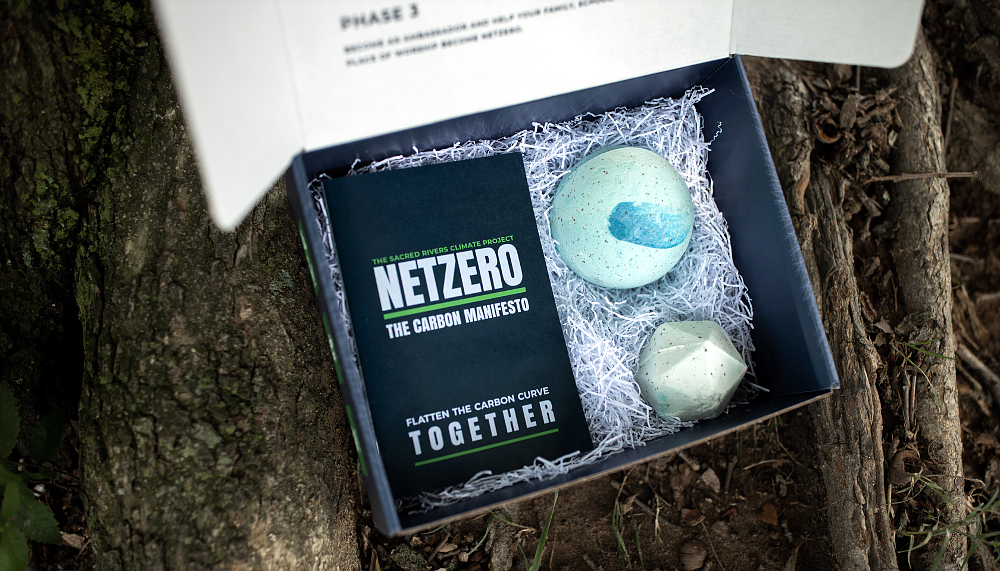 NetZero’s forthcoming “mycelium balls,” which look a lot like bath bombs, can be dissolved in a watering can — turning lawns, flower beds and pots into carbon sinks; even in city environments. The mycelium extends the plants’ root system a thousand-fold within thirty days, giving the plants access to water and rate-limiting nutrients. In return, the plant gives the mycelium 40-70 percent of its carbon.

Each NetZero ball is said to offset around one ton of CO2 per year. They increase plants’ natural ability to draw CO2 out of the atmosphere — where it is absorbed by, and remains in, the soil nearly indefinitely.

Next month, the company will launch a crowdfunding round on Indiegogo, with all profits supporting the Sacred Rivers Climate Project — which plants indigenous forests in Nepal, Uganda and Bali.

Kelly, a 30-year veteran of entrepreneurship, is clearly excited: “US lawns capture about 500 million tons of atmospheric CO2 a year — and with NetZero, we can double that.”

But engaging consumers is tough — especially when the climate benefits are invisible. Will this be enough to help turn the tide on our climate crisis? He certainly hopes so, pointing to an app with an augmented reality component — which will make it more fun and engaging to save the planet.

“[The app] will show users, through their smartphone, the size of their footprint. 20 metric tons of carbon equals 30,000 square feet of atmospheric CO2. It will also give them a real-time image of the forests they plant and the ability to virtually walk through them.