While zero-waste initiatives in the US gained momentum in 2019 and early 2020, myriad complications related to the pandemic brought many to a screeching halt. But as we transition from emergency mode, there have been restarts.

Zero-waste initiatives gained momentum in 2019 and early 2020; with more states and cities supporting composting, enacting organics-to-landfill bans, and developing municipal-scale food-waste collection and recycling programs. Though not a nationwide movement — East and West Coast states are certainly ahead of other areas in the US — in a Spring 2020 Yale Program on Climate Change survey, 72 percent of US citizens acknowledge that global warming is happening, and 78 percent agree that schools should teach about global warming. Fast-forward almost a year, and much has changed because of the pandemic.

As a result of the pandemic, food-waste recycling programs were halted or delayed in some cities and towns due to budget constraints, social distancing requirements, or prioritization of financial and staffing resources. New York City suspended its curbside food waste recycling through June 2022, citing budget constraints; the same program in Cambridge, Massachusetts is still suspended because of social distancing requirements for truck personnel.

Composting continues in California; but LA Compost — a network of community composters who maintain compost hubs throughout Los Angeles County — suspended new member additions and closed some collection locations. In Portland, Oregon, the business food waste collection program that was set to start in March was delayed until September and then delayed a year, until March 31, 2021. Organizers say it was poor timing to start a new program. The question is, when will the timing improve?

No nationwide mandate for organics recycling

There is still no nationwide standard for recycling, let alone organics recycling. The Northeast Recycling Council’s July 2020 state-by-state recycling report revealed that only 27 states have at least one mandatory recycling requirement. The most frequent items to be cited for mandatory recycling are lead-acid batteries (16 states). Leaves must be recycled in seven states and grass in five. Nationwide, food waste and organics are not even among the top 12 items that must be recycled.

Another obstacle to increased food waste recycling is a lack of state infrastructure, according to Luann Meyer, President of the Solid Waste Association of North America (SWANA) NY Chapter. Meyer says that New York State, for example, lacks the infrastructure to fully support the commercial food waste ban and that facilities will need to be built or expanded on to support the law. 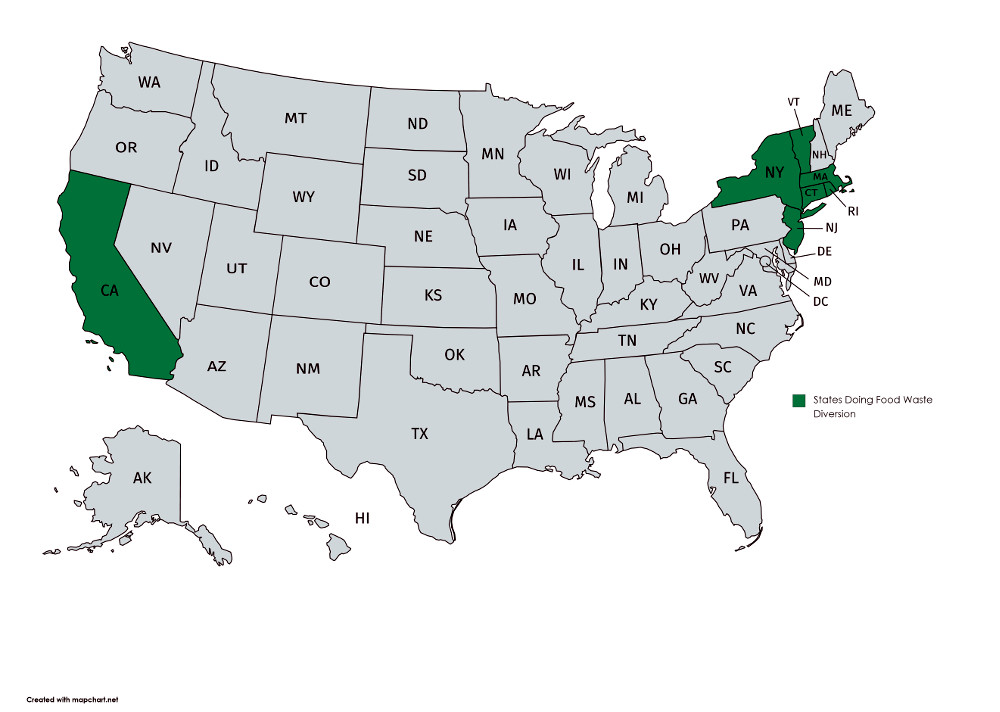 New Jersey’s governor approved a mandatory food waste recycling bill in April, following six years of debate. The measure requires food waste generators with 52 tons or more of food waste annually to recycle if they are located within 25 miles of an authorized recycling facility.

Vermont has the most aggressive food waste recycling measure in the US. In 2012, the state implemented the Vermont Universal Recycling Law, which applies to any individual or business generating food waste. The state held to its scheduled July 1, 2020 launch of the residential portion of the law, which mandates organic waste recycling — a bold move, considering others were backing away from launch dates during the COVID outbreak.

Although many residents had already been composting on their own, according to Bob Spencer — Executive Director of Windham Solid Waste Management District in Southern Vermont — he has seen an increase in residential food waste dropped off at the Brattleboro transfer station. However, he notes that food waste recycling had already been growing steadily.

“Food waste recycling is a good financial move. Brattleboro has been doing curbside food waste pickup since 2013. It saves $35 a ton versus landfill disposal, which saves the town about $30,000 a year,” Spencer says. The District’s composting site has experienced consistent volume compared with pre-pandemic times; but there has been a shift — as residential and food manufacturing sectors have increased, while commercial and institutional sectors have contracted.

Some thawing of shutdowns

The good news is that we have transitioned from emergency mode to a “new normal” and there have been restarts. In July, Cambridge, Mass. opened five expanded compost drop-off sites. In September, the NYC Department of Sanitation restored $2.8 million to fund community composting. It reopened multiple NYC Compost Project sites across the boroughs, in addition to some drop-off sites. LA Compost now accepts new members; and Arlington, Virginia restarted curbside yard waste service after a four-month hiatus due to staffing issues.

As seen in Vermont, municipal waste programs have had to adjust to a shift to higher levels of residential waste with so many people at home. Coupled with continued high absenteeism in Atlanta and Philadelphia, lack of sanitation staff led to service issues and backlogs. While Atlanta continues to post delays in trash pickups, Philadelphia finally hired temporary workers to overcome the backlog; however, residential trash is still 25 percent above normal levels, and mixing of recyclables with regular trash may still occur, according to a spokesperson. Given that states and municipalities are primarily focused on maintaining essential solid waste services with minimal disruptions, and some deal with real budget shortfalls due to the pandemic, recycling ban implementation and targets for the foreseeable future will surely continue to be negatively impacted.

Which direction will the climate change conversation take?

COVID will continue to impact consumer mindsets regarding food waste and its impact on climate change, but in which direction? Consumers may direct their focus on the immediate need for food, shelter and health. On the other hand, food waste recycling could be seen as a benefit to the global good and spur a renewed commitment to sustainability. Most likely, it will be a combination of the two — depending on the region of the country and the challenges of the pandemic at the local, fiscal level.