Promising developments in expanding the blue economy, philanthropy for climate action, and heavy industry net-zero commitments were among hopeful highlights from the annual gathering.

The annual meeting of the World Economic Forum (WEF), held in the Swiss-Alpine resort of Davos every January, still matters. In the fight to tackle inflation, the cost-of-living crisis and climate chaos, world leaders must reimagine globalization. As McKinsey’s Tracy Francis puts it: “Today’s biggest challenges don’t respect borders; there are no solutions to the world’s largest problems that don’t involve the leaders of the world’s largest companies and national and international policymakers.”

Climate activist Greta Thunberg sees it differently, of course. Speaking on the sidelines of the week-long event, she made the point that our world leaders are “the people who are mostly fuelling the destruction of the planet … And yet, somehow these are the people that we seem to rely on solving our problems.”

For now, rely on them we must. At least there appears to be appetite to step up to the challenges we face. 52 years since the first Davos meeting, the 2023 gathering convened a record number of leaders from governments, businesses and civil society — including 47 heads of state. The idea has always been to discuss the priorities for the year ahead, to debate possible outcomes, and to come up with solutions in the spirit of openness and inquiry.

So, what came out of Davos 2023? Here are 5 key takeaways that will interest companies engaged in the climate fight.

While the Global Risks Report 2023 ranks cost of living as the most severe, short-term global risk for governments and businesses, talk about the climate crisis — and the failure of both mitigation strategies and adaptation options — dominated meeting discussions. A point raised and echoed continuously throughout Davos 2023 was that while investment in cleantech steadily increases, it is being overshadowed by support for fossil fuels. As UN Secretary-General Antonio Guterres said: “Fossil fuel producers and their enablers are still racing to expand production, knowing full well that this business model is inconsistent with human survival.”

Good news came in the form of an announcement by heavy industry, which is responsible for around 30 percent of greenhouse gas emissions. WEF proudly claimed that nine new industrial clusters across Europe, Asia and North America have joined its Transforming Industrial Clusters Towards Net Zero initiative. The project aims to bring 100 industrial clusters together to secure net-zero commitments by the middle of the century. Right now, there are 17 clusters that collectively pump out 451 million metric tonnes of CO2e a year.

Another exciting development came in the form of the Global Battery Alliance — which launched a proof of concept for its Battery Passport, which will hopefully give buyers and investors more confidence when it comes to producing, recycling and reusing electric vehicle batteries.

2. Philanthropy very much on the table when it comes to climate action

When it comes to solving our climate, energy, nature and sustainability challenges, leveraging corporate giving remains a key strategy for business and governments. However, of the $810 billion handed out by philanthropic organisations in 2021, just 2 percent went towards GHG-reduction projects, according to WEF estimates.

This year, Davos saw the launch of a new scheme designed to unlock many more dollars to support climate action. Giving to Amplify Earth Action (GAEA) aims to close the $3 trillion annual finance gap between current levels of support for climate and nature initiatives and what is actually needed to meet international agreements, such as the Paris Agreement. So far, 45 philanthropic funds have signed up — including the IKEA Foundation, the Bezos Earth Fund, the BMW Foundation and the Wellcome Trust.

3. Oceans to get the financial backing they need to survive and thrive

The opening kick-off concert gave a major clue as to one of Davos’s central themes this year. Called “I Sea You,” the event used the stage to urge policymakers to protect our oceans and restore coral reefs.

Keen to promote the so-called blue economy — which assigns a value to marine resources, thereby attracting more investment in its protection and restoration — WEF’s Ocean Action Agenda announced a new deal with the Government of Indonesia to help scale conservation projects. The partnership hopes to stimulate demand for, and access to, high-quality blue-carbon credits and projects by bringing together stakeholders that can help to close deals and grow the market. As Ocean Action Agenda’s Kristian Teleki explained: “Blue carbon holds immense potential for marine ecosystem restoration and coastal community resilience, while contributing to climate mitigation and helping raise critical funds to advance the urgent needs for ocean protection and conservation.”

4. Acceptance that much of climate change is irreversible — and we must now build resilience

A key message that came through loud and clear during Davos was that many of the changes to our climate and weather patterns is now ‘baked in’; even if we are successful in meeting the goals of the Paris Agreement, we will still need to adapt to changes that have already happened.

5. Greta and friends continue to hold businesses to account

“They are prioritising self-greed, corporate greed and short-term economic profits above people and above planet. These people are going to go as far as they possibly can as long as they can get away with it. They will continue to invest in fossil fuels; they will continue to throw people under the bus for their own gain.”

Thunberg was talking about the world’s leaders at Davos, of course. Speaking at the event that made her a household name four years previously, the campaigner said it was “absolutely ridiculous” that Sultan Ahmed a-Jaber — CEO of United Arab Emirates’ state-owned oil company — will chair the next UN climate meeting later this year. Although a COP28 spokesperson was quick to defend the decision, insisting that al-Jaber was “uniquely qualified to deliver a successful COP28,” Greta’s riposte — echoed by many other activists in Davos across the week — offered a stark reminder to the business community: Attempt to greenwash at your peril. 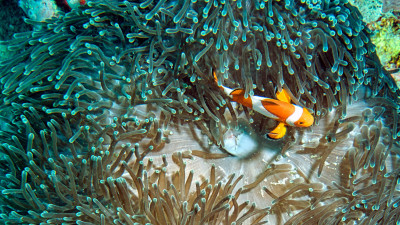 FINANCE & INVESTMENT
Can Insuring Nature Encourage the Necessary Action to Protect It from Climate Risks?