Mark McElroy
Published 2 years ago. About a 9 minute read.

The timing is right for taking concrete steps to standardize a set of generally accepted triple-bottom-line accounting principles, and for making GRI and other reporting standards stronger than they’ve ever been before.

Next year will be the 20th anniversary of the first release of the Global Reporting Initiative’s (GRI) Guidelines for sustainability reporting, now referred to as the GRI Standards — an important milestone for what has become the world’s leading international standard for non-financial reporting.

It wasn’t until 2002, however, that reporting principles per se were included by GRI in the second generation of its Guidelines (G2) that year. In total, there were eleven such principles listed, four of which are now separately broken out as Reporting Principles for Defining Content in the current version of the Standards.

One of these four principles is Sustainability Context, which essentially calls for organizations to report their performance “in the larger context of ecological, social, or other limits or constraints.” As explained to me privately by Allen White, one of the founders of GRI and creator of the Sustainability Context principle, “I argued that absent context, even if all enterprises continuously improve performance, the collectivity may violate boundaries that define a thriving, regenerative world.”

Notwithstanding the truth of this, G2 provided no guidance on how to actually apply the Sustainability Context principle, nor has it done so in the versions that followed. Even so, the current edition of the Standards faithfully includes the principle, still expressed in language that closely mirrors the phrasing used in 2002:

“… the aim is to present the organization’s performance in relation to broader concepts of sustainability. This involves examining its performance in the context of the limits and demands placed on economic, environmental or social resources, at the sectoral, local, regional, or global level.” (GRI, 2016)

Houston, we have a problem

And that, unfortunately, is exactly what has been happening for the past nineteen years, now going on twenty. We blithely skipped over the critical and indispensable step of figuring out how best to perform sustainability accounting, and instead jumped headlong into reporting as if measurement was a settled matter — it was not! The result? Nineteen-plus years of corporate sustainability reporting that tells us nothing about the sustainability of organizations, thanks mainly to the fact that no one took the time to first determine how best to measure it.

Imagine what things would be like if we carried on that way in financial reporting — there would be hell to pay for sure. While far from perfect, at least we have something today called Generally Accepted Accounting Principles (GAAP), which provides everyone with codified standards for how best to measure the financial performance of organizations before any of them try to report it. First, we perform standards-based measurement; then, we perform standards-based reporting. What a concept!

In 1933, shortly after the great depression and long after principles for double-entry bookkeeping had been developed, the Security Act of 1933 was enacted by the U.S. Congress (also known as the Truth in Securities Act, incidentally), by which it became mandatory for all publicly traded companies to prepare and release financial statements. Such a step would not have been possible had standards for financial accounting not already existed. Today, such financial statements routinely include income statements, balance sheets, statements of changes in equity, and cash flow statements — all according to GAAP, a standard for accounting.

And how could it be otherwise? A solution for such accounting hasn’t been born yet. Or has it? Could it be, instead, that it has been born and that the makers of reporting standards have simply not noticed it yet?

Putting the horse back in front

Having now seen that in sustainability reporting we have been collectively guilty of putting the cart before the horse — reporting before accounting — let us now agree that the time has come to turn things around and put the horse before the cart. It is time, that is, to settle in on some basic principles for how best to make sustainability accounting, and the reporting that follows, context-based. Indeed, to its everlasting credit — and with a special tip of the hat to Allen White — the one thing we should all feel comfortable in saying is that in G2, GRI definitely got the Sustainability Context thing right. That is clearly the regulative ideal we should be subscribing to! 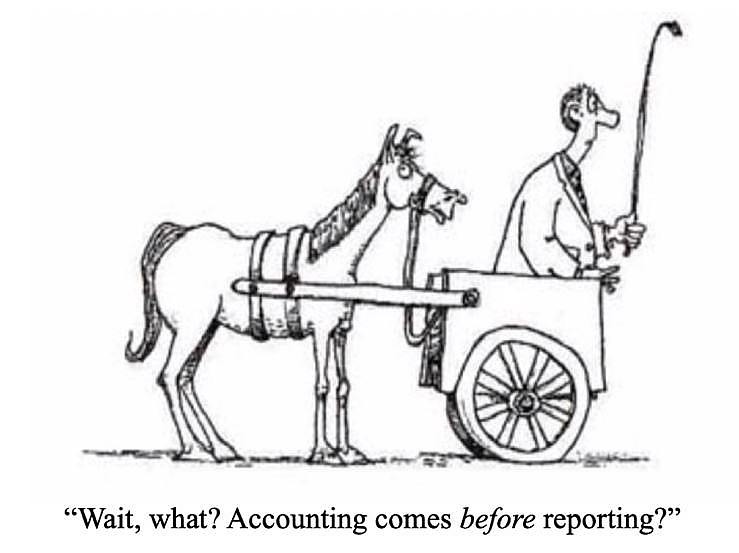 Listen to how White put it, as he reminisced on the evolution of the principle in the run-up to G2: “In the course of wide-ranging stakeholder consultations, it became clear that true sustainability reporting at the enterprise level must be contextualized within boundaries that define the ecological, social and economic systems limits, both upper and lower, ceilings and floors.”

There can be little doubt that this is true and that Sustainability Context must absolutely underlie sustainability accounting in order for the TBL performance of an organization to be understood. For if under any other principle it is possible for organizations to score “sustainably”, and yet still be operating in ways that put the quality or sufficiency of vital resources or the well-being of those who depend on them at risk, then there is something terribly wrong with the accounting system in use.

In the shadow of all of this in the past several years has been the development of what I and many others refer to as Context-Based Sustainability (CBS) — a market-driven, open-source framework of guidelines for how best to operationalize the Sustainability Context principle in not just reporting, but measurement as well — all in an effort to flesh out the horse and put it back in front of the cart where it belongs.

In addition to having garnered support from the United Nations (for use by all organizations), B Lab (which has endorsed use of the MultiCapital Scorecard by Benefit Corporations), Reporting 3.0 (for all organizations), and many others, CBS is now taking the stage as the centerpiece of a new Certified Triple Bottom Line (TBL) certification program still very much in its formative stages at the non-profit Social Accountability International (SAI). Perhaps best known for its long-standing SA8000® certification for human rights in the workplace, SAI has been administering CSR-related certifications to organizations around the world for more than twenty years now, much longer than anyone else.

But is the stage sufficiently set for that? Has the scholarship in Triple Bottom Line accounting been around long enough; evolved long enough; been vetted and continually improved enough, to warrant a jump from theory to codified standards? Are we really ready to make that move?

Absolutely, yes, is the answer. As I have explained here before, principles and practices for how best to do TBL accounting first started to appear in the management literature some three hundred years ago in the work of Hans Carl von Carlowitz, and not only in the more recent writings of John Elkington in 1994 and others. Context-based thinking, too, has been percolating in economics for at least a century, if only in the form of the literature on multiple capital accounting or what I and others call multicapitalism.

Make no mistake, then: The timing is right for this — for taking concrete steps to standardize a set of generally accepted TBL accounting principles, and for making GRI and other reporting standards stronger than they’ve ever been before. Indeed, this idea doesn't replace them; it fortifies and enhances them. And none too soon, mind you. By the GRI timeline alone, we are at least nineteen years late and the clock is still ticking. So, let’s get on with this. Go, SAI!