Organizational Change
SDGs White Paper:
A Compass That Indicates Where Japan Is Today and Should Head in the Future

SUSCOM
Published 1 year ago. About a 4 minute read.
Image: SDGs White Paper 2019
Sponsored Content / This article is sponsored by SUSCOM.

The SDGs White Paper 2019 aims to help promote fundamental understanding of the SDGs — featuring sections that use concrete case studies and data to clearly explain what is happening in the world, what the issues are, and what Japan is doing on each of the 17 goals.

Japan’s SDGs White Paper 2019 was issued in September 2019 by Keio University’s xSDG Laboratory, which is attracting attention for accelerating action on the UN’s Sustainable Development Goals (SDGs). Along with a message proclaiming the genuine launch of SDG efforts, this first SDGs white paper from Japan displays a set of unique local indices and expert contributions, indicates where Japan is right now and its future aims, and maps a concrete path for achieving them. The reaction to the paper has been strong, with the publisher moving much higher up in the rankings than is normal for a white paper publication.

The SDGs set out 17 goals and 169 targets for achieving a more sustainable world. Right now, companies are becoming increasingly interested in SDGs as a business issue; and the SDGs are also rapidly attracting attention as a framework under which a wide range of people, including ordinary citizens, NPOs/NGOs, local authorities and administrative agencies can join forces to solve social issues. Government and corporate efforts are certainly increasing awareness of SDGs in Japan, but multiple awareness surveys conducted in 2019 showed that general awareness remained fairly low at around 30 percent.

The SDGs White Paper 2019 is structured in a way that will help promote fundamental understanding of the SDGs, with the first part including sections that use concrete case studies and data to clearly explain what is happening in the world, what the issues are, and what Japan is doing on each of the 17 goals. For instance, under Goal 1: No poverty, the report illustrates how “one in seven children in Japan live in poverty,” alongside the fact that “736 million people currently live in extreme poverty around the world.” A perusal of the report reveals that all of the pertinent issues facing Japanese society are covered, including: “the extension of healthy life expectancy, the improvement of depression and life habits, and the maintenance of nursing care and public health systems” (Goal 3: Good health and well-being); “long-working hours and abuse of authority” (Goal 8: Decent work and economic growth), and; “coral bleaching, plastic ocean waste and fishing issues” (Goal 14: Life below water).

The first section of the white paper explains the origin of SDGs; and the subsequent efforts and activities by various sectors — ranging from the United Nations, central and local authorities; to corporations, citizens and young people, summarized under contributions from experts. The paper also provides information from various perspectives, from SDGs efforts promoted by financial institutions and through the movement of ESG investment to microplastic pollution issues. Overall, the paper facilitates a very real, multi-dimensional understanding of the SDGs in Japan, backed up objectively by abundant data and case studies.

The white paper’s biggest strength is its SDGs Indices in the second section. This section provides various statistical information on local Japanese indicators to help measure SDGs progress. Many countries and regions are progressing with localization, but this white paper introduces major indices based on the List of Local SDGs Indicators for the Revitalization of Rural Areas compiled by a working group to investigate local indicators under the Japanese Cabinet Office’s Local Government SDGs Promotion and Evaluation Committee. Multiple years of data for a total of over 120 indicators are shown in the white paper, including: “Number of households living on under 1 million yen a year” (Goal 1: No poverty); “Number of hospital admissions due to malnutrition or vitamin deficiency disease (Goal 2: Zero hunger); “Number of spouses seeking advice on domestic violence,” “Proportion of women executives in listed companies,” “Proportion of people engaged in housework” (Goal 5: Gender equality); and “Proportion of alternative energy generation (Goal 7: Affordable and clean energy). This information should prove a concrete guide for pursuing SDGs in various sectors.

In addition to its impressive content, the SDGs White Paper 2019 is also attracting attention for the way in which it has been distributed. The paper utilizes a sustainable publishing platform that preserves resources by offering digital-first production and circulation based on a combination of e-book and print-on-demand options. An English version of the white paper is due to be published in 2020 to convey SDGs circumstances in Japan to the international community. This will be a great challenge with the potential to trigger more explosive promotion of SDGs initiatives in Japan.

LEADERSHIP
‘Lead With We’: How to Drive Business Growth Through Collectivized Purpose 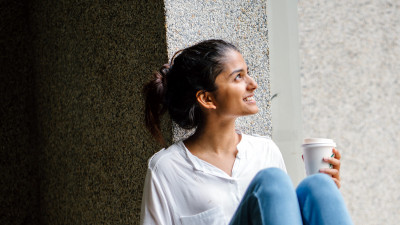