Tom Idle
Published 3 years ago. About a 4 minute read.
Image: Light of Hope (via Facebook)

Light of Hope had the rather ingenious idea of fitting a solar panel-powered classroom into a backpack.

Poor educational achievement of children living in rural communities is one of biggest obstacles to boosting employability — and therefore economic success — in developing countries. Millions of children receive little or no education, and many leave school before finishing their studies — heading to the fields, farms and factories to start work. According to UNESCO, roughly 80 percent of school-age children who do not attend school live in such rural communities.

The educational divide between those living in towns and cities, and those in rural communities, is not improving. The knock-on effect of poor literacy and numeracy continues to create significant barriers to reducing poverty, improving livelihoods and eradicating hunger within the affected communities.

As long as education standards lag in rural areas, the gap between those that have and those that do not will only get wider.

For example, in Bangladesh, around 20,000 primary schools in remote areas have limited, or no, access to electricity. In fact, roughly 40 percent of the country is still not connected to the grid. This presents a serious problem: How do teachers deliver quality, multimedia curricula — the type of teaching method that delivers the best education — without any power.

The country also suffers from a high rate of cyclones in its coastal areas, which have completely destroyed many schools. Bangladesh also hosts the world’s largest refugee camp, where 300,000 Rohingya refugee children are currently deprived of any quality-learning opportunity.

Local NGOs have been attempting to tackle the area’s education issue for a while. The Bangladeshi government has also stepped up, invested in setting up multimedia classrooms in 26,000 schools. But that didn’t help the schools in off-grid areas.

Step forward, Light of Hope — a nonprofit with the rather ingenious idea of fitting a solar panel-powered classroom into a backpack.

“Children learn best when the learning content and method is interesting, engaging and fun,” says Waliullah Bhuiyan, co-founder and CEO of the enterprise, whose innovation comes complete with projector, pop-up screen, Internet connectivity, a power bank and bluetooth speaker — all small enough to fit in a backpack. 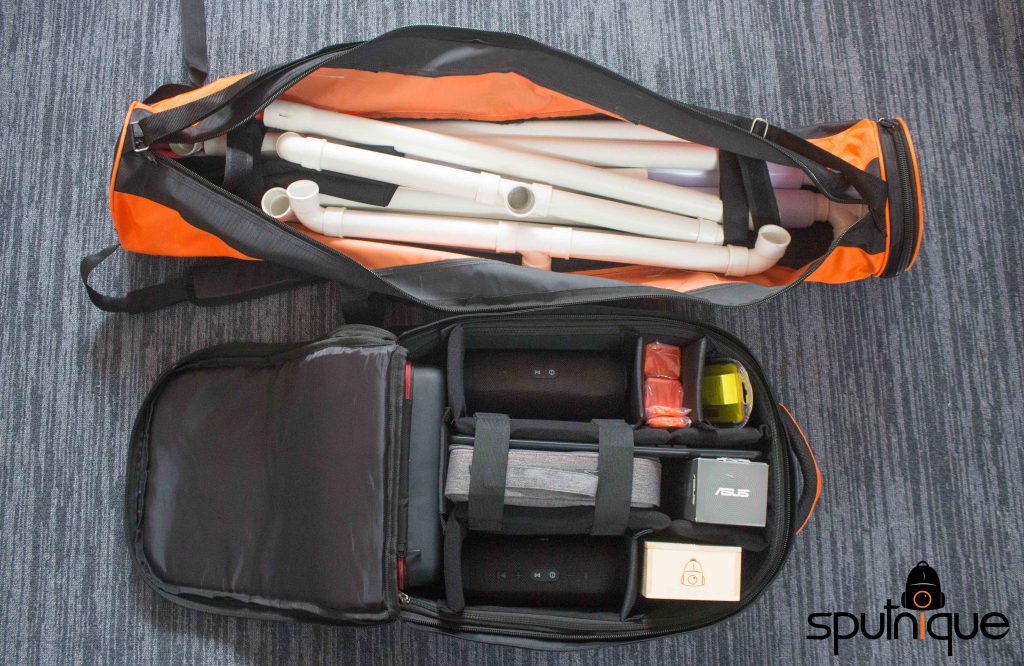 Known as Sputnique, the whole package is run off of a flexible, fold-up solar panel. It weighs just 6kg, so teachers can literally pack it all up and carry it under their arm and transport it just about anywhere. Plus, teachers can take ‘live’ classes from a central location to multiple locations, using the low-bandwidth video-calling software developed for Sputnique.

The idea came to Bhuiyan while working for an NGO in the wake of a massive cyclone that hit the coast of Bangladesh. In organising training sessions for farmers who had lost their crops and health awareness programmes, he was struggling to transport his bulky kit from place to place.

“We desperately needed a multimedia solution that can be used for showing training videos and interactive learning content for children,” he adds. “We ended up with a huge and bulky solution of a typical generator, projector and laptop system that weighed more than 80kg. We couldn’t take it to most areas, and often the generator would run out of fuel and make a loud noise that hampers the sound of the videos.”

It was during this time that inspiration hit — and two years of R&D later, Sputnique was born.

Light of Hope’s four co-founders all graduated from the Department of Electrical and Electronic Engineering (EEE) at the Islamic University of Technology, the only international university in Bangladesh. It began life as a student project back in 2014 when the team applied for the Dell Education Challenge to develop a solar-run multimedia solution for off-grid schools.

“We received $2,500 to pilot our first solution,” Bhuiyan says. “We raised another $4,500 through crowdfunding. With this amount we developed two static versions of Sputnique to set up in two schools.”

Alongside Sputnique, the social enterprise also has a range of other products and services designed to make learning interesting, engaging and fun for children around the world. It is working in partnership with the likes of the Bangladesh government, Save the Children, the **Sesame Workshop**, UNICEF, UNESCO and local schools to deliver interactive materials to students that wouldn’t otherwise be able to access them.

But it is through Sputnique that Bhuiyan and his team has really captured the imagination. So far, the organisation has helped provide better, more stimulating education to 75,000 children in Bangladesh, with Sputnique already working in rural areas, slums and in the Rohingya refugee camp. In the next two years, a small assembling unit will be established locally for Sputnique production. And there are plans to expand and take the innovation to remote areas of Southeast Asia and Africa.