Ebb Carbon’s pioneering carbon-removal technology combines with electrochemistry to accelerate the ocean's natural process of carbon removal, safely storing it for 10,000+ years, whilst simultaneously reducing ocean acidity — helping heal one of our strongest assets in the climate change fight.

The ocean is one of our greatest assets in the fight against climate change. Taking up 70 percent of the earth’s surface, it produces over 50 percent of the oxygen we breathe, sustains an abundance of biodiversity and is the world's largest carbon sink, absorbing approximately 30-50 percent of the CO2 produced from burning fossil fuels.

The ocean’s efficiency in absorbing CO2 is also its downfall; the more CO2 it absorbs, the more acidic it becomes. Ocean acidification is essentially a change in the chemistry/pH of the ocean, which consequently is leading to “collapsing food webs, corrosive polar seas, dying coral reefs and mass extinctions.” Ocean acidification has increased 25 percent since preindustrial times due to human activity and the effects are being seen on a global scale.

Additionally, the processes responsible for ocean carbon removal take millions of years; and with carbon dioxide becoming ever more prevalent in our atmosphere, it would be beneficial to find a way to enhance ocean carbon removal, without the associated impacts of acidification.

Matt Eisaman, Ebb Carbon's Chief Technology Officer and co-founder, has spent the last decade researching the ocean carbonate system and how it, along with electrochemistry, can help the ocean absorb more atmospheric carbon dioxide. In February 2021, Eisaman and co-founder Ben Tarbell launched Ebb Carbon — a company that uses technology and electrochemistry to speed up the ocean's processes of carbon removal, with the co-benefit of reducing ocean acidity.

“The chemistry of the ocean is well understood, so I always knew that Ebb’s technology was possible. To date, we have demonstrated that our electrochemical system is energy-efficient, low-cost, and compatible with the ocean,” Eisaman told Sustainable Brands™. “So, the question we face today isn’t really ‘can we do this?’ It’s ‘Can we do this fast enough, at a large enough scale to draw down gigatons of carbon dioxide per year by mid-century?’”

Ebb Carbon’s solution has the potential to be one of the largest-scale and lowest-cost paths to removing excess carbon from the air. The electrochemical process works by intercepting the saltwater that saltwater-treating facilities deposit back into the ocean and adjusting the electricity of its molecules — the salt and water molecules in saltwater are rearranged to produce acid and slightly alkaline saltwater solutions. When this alkaline saltwater returns to the ocean, a natural chemical reaction occurs — and CO2 is pulled out of the air and stored as bicarbonate. 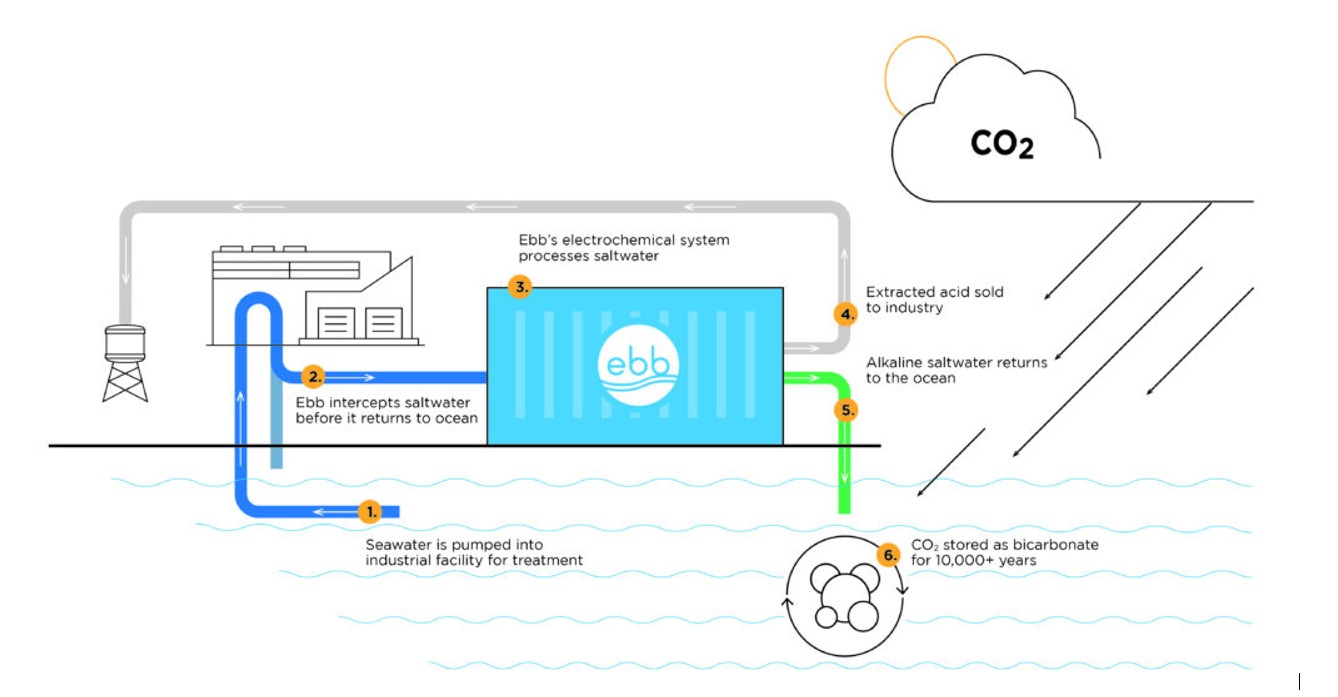 “We are enhancing a carbon-storage process that is already happening. The ocean has a natural solution for carbon storage: bicarbonate — the ocean’s most abundant form of carbon storage. It safely stores carbon dioxide for 10,000+ years; and it doesn’t add to the ocean’s acidification problem — it actually helps solve it,” Eisaman explains.

Ebb Carbon’s system provides a permanent solution to safely store excess carbon for 10,000+ years. And the process is scalable: Ebb Carbon’s approach uses the ocean’s vast surface area to capture and store carbon, and its technology is built with modular, prefabricated elements that easily scale. Ebb’s systems are designed to be integrated with existing facilities, so can be installed quickly — drawing down carbon dioxide faster. In addition to carbon removal and permanent storage, the technology is helping to heal the ocean by reducing its acidity.

“The reason we have chosen to focus on the ocean is that we believe it is our best natural ally in relation to climate change — it covers more than 70 percent of the globe and acts like a sponge that continuously absorbs carbon from the atmosphere. Because we are harnessing such a vast natural resource, Ebb’s technology has the potential to have an enormous impact on climate change,” Eisaman says.

Carbon-removal technology is essential in the fight against climate change — according to the most recent IPCC report, 5-10 gigatons of CO2 will need to be removed from the air every year between now and 2050 to prevent the world from overheating. Currently, there are 19 carbon removal facilities worldwide drawing down CO2 from the air. Combined, they capture around 10,000 tons of CO2/year — this is a start, but just a small fraction of what we need.

“The world is going to need a variety of technologies to meet the challenge of removing gigatons of carbon from our atmosphere. Harnessing the power of the ocean in this fight is an underexplored area of carbon removal; and we’re pleased to be one of the few working on this potential solution,” Eisaman explains. “We expect Ebb’s ocean-based carbon removal, direct air capture and other technologies to play an important role in drawing down the gigatons of carbon we need to remove from our atmosphere.”

Over the next five years, Ebb Carbon is planning to partner with facilities that process seawater — including desalination plants, aquaculture facilities and wastewater treatment plants.

“Locating our systems alongside facilities that already treat seawater means we can tap into existing networks of pumps and pipes that process and carry seawater,” Eisaman explains. “This reduces complexity and cost, and will help us deploy our systems and remove carbon dioxide from the atmosphere more quickly.”

The first Ebb System will be deployed later this year to deliver carbon offsets to its first customer, Stripe. This system will be rated at one hundred tons of CO2 per year capacity. Over the next few years, Ebb is set to deploy dozens of similar units which will enable the team to continually improve the efficiency and cost of the system. By 2027, Ebb plans to be operating at the megaton scale by partnering with a variety of facilities that already process seawater.