Israeli startup Beewise is reinventing beekeeping through AI technology and automation, and significantly improving pollination and honey yields with its smart, networked hives.

Honeybees, though tiny, play a huge role in sustaining vegetation across the world. Without bees, the diversity and availability of fresh produce would substantially decline — they are responsible for around 80 percent of worldwide pollination, with a single bee colony pollinating up to 300 flowers each day. 70 out of the top 100 human crops, supplying 90 percent of the world’s nutrition, are pollinated by bees.

Despite bees’ importance in maintaining global biodiversity, their populations have been threatened more and more by colony collapse disorder (CCD) — which has seen billions of worker bees, critical to the operation and survival of a colony, leave behind their hives and their queen. Modern challenges including pests, climate change and pesticides are contributing factors to CCD — creating significant stress on bee populations. Since 2006, 30+ percent of honeybee populations are declining each year.

Technological developments surrounding beekeeping have long been overlooked; the industry has remained the same for the last 170 years, since the invention of the first humanmade beehive. Enter commercial beekeeper Eliyah Radzyner, who — together with serial entrepreneur Saar Safra — co-founded Beewise, a startup whose robotic beehives are promoting bee survival in the face of global warming and other modern stressors.

“The industrial revolution, digital revolution, and AI revolution all skipped over beekeeping,” says CEO and co-founder Safra. “Beewise's solution, the Beehome, is the first of its kind — an autonomous beehive with an integrated robotic beekeeper. By combining experience in both beekeeping and technology, we have developed and brought to market a state-of-the-art solution with proven results.” 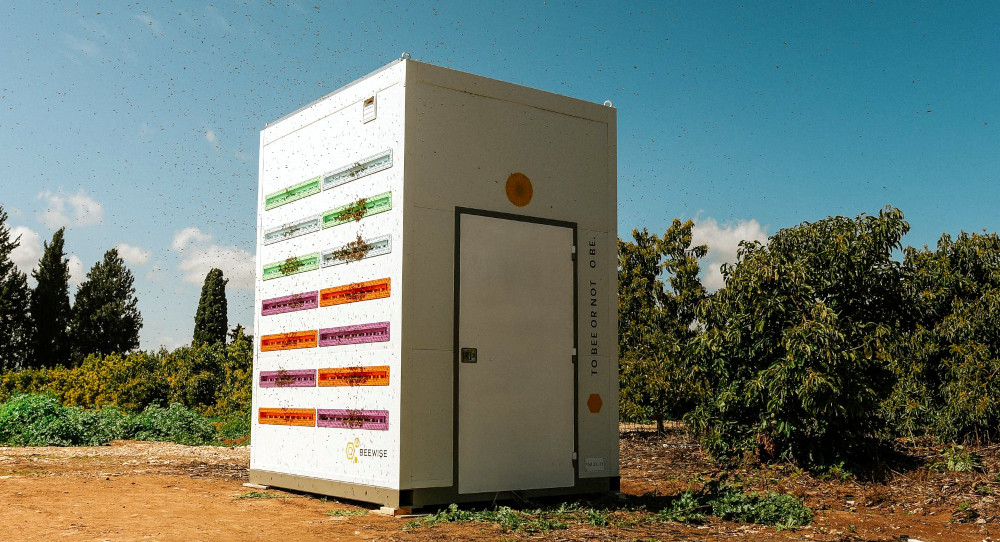 The Beehome allows bees to be taken care of in real time and beekeepers to remotely manage their hives while gaining vital access to data about their colonies. Each Beehome houses up to 48 bee colonies — or one to two million bees. The AI within the Beehome constantly monitors activity within the hive and learns from the beekeepers' actions — if a beekeeper applies a particular treatment, the AI associates that action with specific conditions; then, if similar conditions are detected by other devices, the robot can recommend the same treatment. The AI monitors and learns from the entire portfolio of Beehomes, which operates in the cloud and applies its learnings across the portfolio.

Understanding what is happening within a colony is vital to preservation of the bee population.

“Once there is full visibility into a colony, taking action is the easy part of addressing climate change and modern stressors. For example, if the bees have no forage to access and are in starvation mode, Beewise's robot can easily feed them. Or, if it is too warm or cold outside, the robot can easily adjust the hive's temperature to accommodate the bees. The data collected is the real asset, allowing Beehomes to save bees at scale,” Safra explains. “97 percent of what a beekeeper would do is carried out automatically and often autonomously by the Beehome. It is as if every bee has its own personal beekeeper, 24/7.”

Beewise says its Beehomes reduce bee mortality by 80 percent, increase yields by at least 50 percent, and eliminate ~90 percent of manual labor compared to traditional beehives. By utilizing 24/7 monitoring and smart technology, Beehomes automatically detect threats to a honeybee colony, such as pesticides or the presence of parasites; and the robotic system responds by addressing the threat in real time in the field.

“Traditional beehives do not protect bees from climate change and modern stressors, harming the species' survival,” Safra says. “Our goal is to replace all the traditional hives with Beewise's robotic Beehomes — not only to stop bee colony collapse but also to reverse the trend and allow the population to restore to its natural order.”

Building the self-contained, solar-powered Beehome was no simple task — unlike other types of livestock, bees cannot be contained with fences or wires and can leave their hive many times a day to forage. If the bees' nests are not accommodating to their needs, they can simply fly away and leave.

“Consequently, building a device that has robotics, computer vision, solar panels, mobile and is secure is not enough; it also has to be comfortable for our core customer: the bee. The level of complexity of building a device that has to accommodate a biological model is tenfold more complex than just building robotics or IoT,” Safra explains. “These complex little creatures are sensitive and require a very specific set of conditions to feel ‘at home.’ Our robotic hives have the lowest levels of swarming (when bees leave their home due to uncomfortable conditions) than any hive in existence.”

Headquartered in Galilee with an outpost in Oakland, Calif., Beewise recently secured $80 million in its latest Series C funding round, which Safra says will primarily be invested in IP (R&D to improve the devices even further), market expansion, improving its service, and operational excellence. Having brought its Beehomes into the US, which now hosts 24,000 hives (with plans for over a million), the company aims to expand further into Europe and Australia.