Published 2 weeks ago. About a 5 minute read.
Image: Kindel Media

JUST Capital and CNBC have released the 2023 rankings of the country’s most JUST Companies and Marquee JUST 100 List, which consistently outperform the Russell 1000 — highlighting the link between stakeholder governance and corporate success.

Today, JUST Capital released the 2023 rankings of the US’s Most JUST Companies — led by the JUST 100 — in collaboration with CNBC. Each year, JUST Capital takes its polling of what the US public most prioritizes when it comes to just business behavior and sees how the country’s largest public corporations stack up.

This year, out of the 951 companies ranked based on their performance across stakeholders, Bank of America tops the list for the first time; with NVIDIA, Microsoft, Accenture, Truist, Verizon, Hewlett Packard Enterprise, Apple, Intel, and JPMorgan Chase rounding out the top 10.

JUST Capital believes that business can play a role in creating an economy that works for all stakeholders, and that the evidence shows the best way to build and run a great business comes through a stakeholder-focused approach. Here are some ways that all stakeholders — workers, communities, customers, the environment and shareholders — and authentic corporate governance are linked, as shown through outperformance of JUST 100 companies.

Compared to other corporations ranked each year, JUST 100 companies on average: 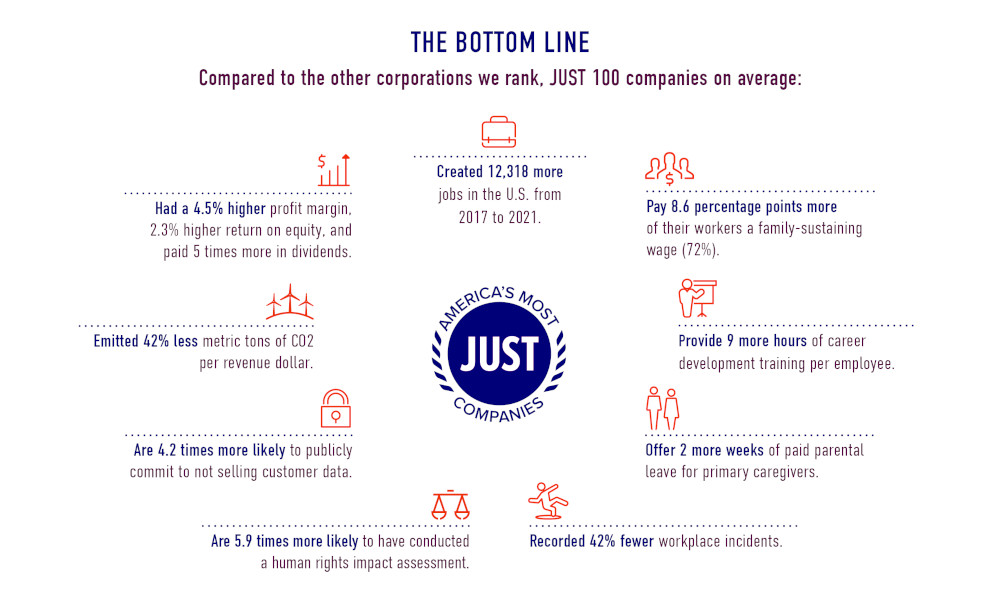 The issues powering the rankings

This year, JUST’s survey research team asked a representative sample of 3,002 US adults to prioritize which issues matter most — see the following chart, pulled from JUST’s 2022 Issues Report. 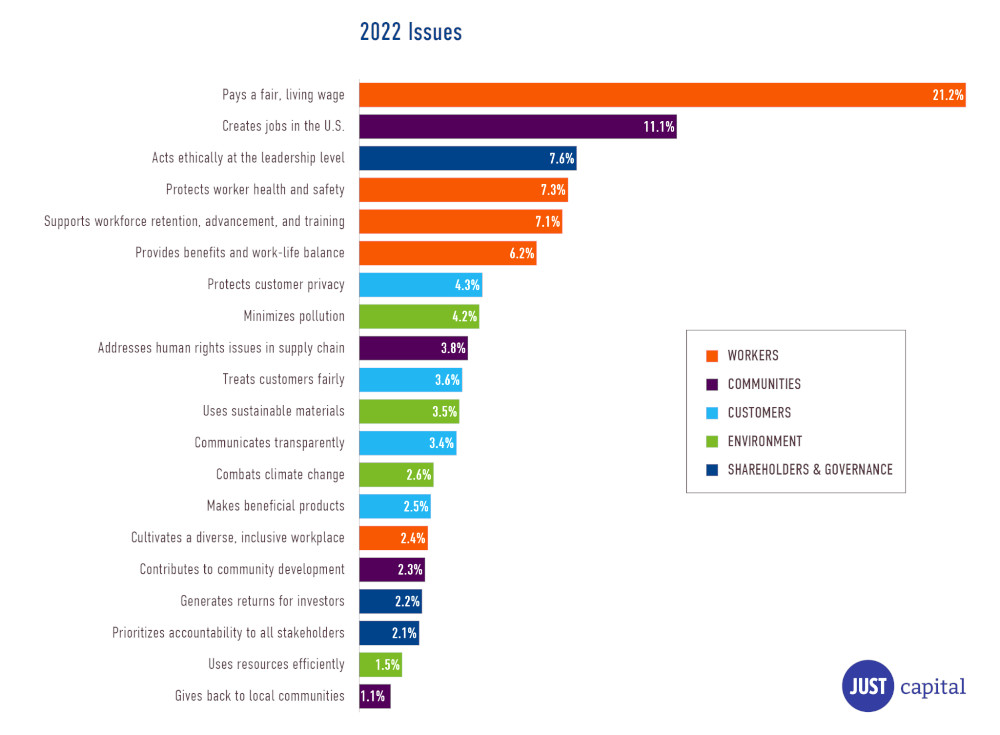 Over the last seven years, Worker Issues have consistently commanded the highest share of priority among the 20 stakeholder-related issues measured; and this year is no different. Four of the five Worker Issues — including paying a fair, living wage; supporting workforce training; protecting worker health and safety; and providing benefits and work-life balance — are among the top six priorities of the public, and the collective prioritization of all five worker issues comprise 44 percent of a company’s score this year.

And despite the ongoing political polarization in the US, respondents are united when it comes to just business behavior. Among every demographic group — liberal, conservative, high-income, low-income, men, women, young generations, older generations; and white, Black, and Hispanic Americans — workers remain the top priority. And for each of these demographic groups, the most important issue is “Pays workers fairly and offers a living wage that covers the cost of basic needs at the local level,” which comprises a significant 21.2 percent of companies’ scores in this year’s rankings.

As more industries implement layoffs and fears of a 2023 recession loom, it’s also important to note that the second most important issue that powered significant shifts in the rankings model is “creating jobs in the US and providing employment opportunities for communities that need them.”

But, clearly there is more nuance to assessing whether companies are walking their talk in terms of their commitments on governance issues. JPMorgan Chase — which landed at #9 on JUST’s 2022 Workforce Equity and Mobility Ranking and performed well in its 2022 Corporate Racial Equity Tracker, thanks in part to the $30B racial equity commitment it made in 2020 — landed at #10 on this year’s JUST 100 list. According to the assessment, the finance giant appears to be performing fairly in this area; but last month, it was called out by shareholders SOC Investment Group for what SOC calls the bank's “insufficient and heavily flawed racial equity audit reporting of its supposed $30 billion commitment to address systemic racism and discrimination throughout in its workplace and consumer products.”

JUST said it made enhancements to the way it measures a company’s performance on the top priority of the public — paying a fair, living wage — with the help of data partner Revelio, which drove significant shifts in the rankings this year including a new minimum wage disclosure data point and new assessments on living wage, wages compared to industry peers, CEO-to-median worker pay, and more.

Banks made significant gains this year because they categorically outperformed on worker issues — especially in transparency over wage data, pay equity, and commitments to larger, national minimum wages than peers. This year’s rankings are led by Bank of America, the first bank to ever top the list, because it has led on worker issues (1st in industry and 1st overall): B of A raised its minimum wage to $22 an hour and committed to $25 an hour by 2025. It’s invested millions in career development and tuition assistance, offers 16 weeks of paid parental leave for both primary and secondary caregivers, and provides flexible work scheduling and backup dependent care. It is one of 14 percent of companies to conduct and release the results of its pay equity analysis, and also discloses detailed workforce demographic data by race and gender.

Banks also saw an average ranking increase of 134 in the “Creates jobs in the US” Issue, the second-highest-weighted of the model (11.1 percent). Banks are consistently in the top third of our rankings when it comes to US job numbers; and they also have the highest number of companies with second chance/reentry policies, four of which are in the JUST 100.

This year, JUST also developed a new way of factoring gig workers into a company’s Workers score — which led Uber to drop precipitously from #41 overall to #505, well out of the Just 100 rankings; and penalized six companies for unique events.

Explore the complete Rankings, with detailed breakdowns for each stakeholder metric; and download the methodology to explore other updates to the model this year.