Waste Not
In Rhode Island, Mission to Improve Ocean Health Is Starting on Land

“If we’re going to solve for beach and ocean cleanliness, as well as climate change and ocean acidification — and we certainly have to do it all — then we have to acknowledge that the health of our soil is crucial.” — Dave McLaughlin, Healthy Soils Healthy Seas Rhode Island

If you are reading this article, you most likely realize that humanity needs to find and implement decarbonization solutions, in massive numbers, at a global scale, starting yesterday, if we are going to avoid the most calamitous effects of climate change. The 2018 UN Intergovernmental Panel on Climate Change (IPCC) report estimates that the world has only 12 years to cut greenhouse gas emissions by half. Accelerating the pace of deployment of high-tech solutions, from renewable energy to large-capacity storage batteries, gets most of the attention.

But not all difference-making carbon-reduction solutions come from the high-tech arena. Something as low-tech as the composting of food waste will, if done at scale, improve the health of our soils and seas — in truth, our entire environment — along with delivering those crucial, significant climate change benefits.

One potentially groundbreaking solution in this arena is being piloted on Aquidneck Island, Rhode Island, home to Newport — iconic capital of sailing in the US.

Here, Dave McLaughlin — a lifelong bodyboarder, weather-o-phile and former IT professional at Hasbro — helped launch the nonprofit Clean Ocean Access in the mid-2000s. His goal then was to increase public access to local beaches, many of which were restricted. He believed that people had to be able to visit the beaches to be inspired to take action to combat the sewage spills and shoreline waste that plagued and continue to bedevil Aquidneck Island.

“People have to be connected to the ocean, but if you can’t get there, you’re not going to care,” McLaughlin related. “And once you’re able to visit the shore and become involved in cleaning up debris, engaging in conversations about waste, you’re more likely to care about climate change.”

Clean Ocean Access soon realized that an integrated approach to shoreline and ocean health was necessary.

“The condition of the island’s waterways does not depend solely on the cleanliness of the beaches and on what’s dumped into the ocean,” McLaughlin noted. “Excessive carbon in the atmosphere that enters our oceans, which fuels ocean acidification and adds to climate change, is a big problem, as well. An efficient way to solve this is to store carbon in the soil before it ever gets to the water. If we’re going to solve for beach and ocean cleanliness, as well as climate change and ocean acidification — and we certainly have to do it all — then we have to acknowledge that the health of our soil is crucial.”

The organization began to walk the healthy-soil walk in 2018 when it, along with several partners, launched Healthy Soils Healthy Seas Rhode Island (HSHSRI). The initiative aims to make composting as commonplace as taking out the trash — first on Aquidneck Island, then throughout Rhode Island and then beyond.

McLaughlin and the HSHSRI team had a tall task ahead.

“Almost 33 percent of waste that goes to the landfill in Rhode Island comes from organic matter, mostly food, and less than one percent of our food waste is composted,” McLaughlin lamented. “We also don’t appreciate the massive amounts of low-to-no-value materials we throw in the trash — think plastic bags, and much more. So we were clear-eyed about this: Our waste footprint on the island is horrible; we saw ourselves as the problem. We also knew we needed to be the solution.”

HSHSRI knew that, if much of that food waste could be diverted from landfill by composting, the health of the region’s soils and waterways would improve. And that would just be the start of a powerful positive feedback loop.

Talk about a win-win-win-win. Maybe I missed a win in there, but you get the idea.

Before HSHSRI launched last fall, composting was basically not a thing on Aquidneck Island, save for a backyard composter here or there. So, the team urged local residents and restaurateurs to get their hands dirty.

“We showed our neighbors how to literally pull food waste out of the trash,” McLaughlin recalled.

At the program’s launch, attended by Rhode Island’s two US senators, Sheldon Whitehouse and Jack Reed, a four-pronged composting program — curbside, market drop-off, restaurant and backyard — was announced, and a local composting industry was midwifed.

HSHSRI teamed up with local services Rhodeside Revival for residential compost pickup and The Compost Plant to work with restaurants. Aquidneck Community Table, a local farmers market organization, continued to collect food scraps at the farmers market, and offered workshops and starter kits for backyard composters through its brilliantly named YIMBY (Yes in My Backyard) initiative. 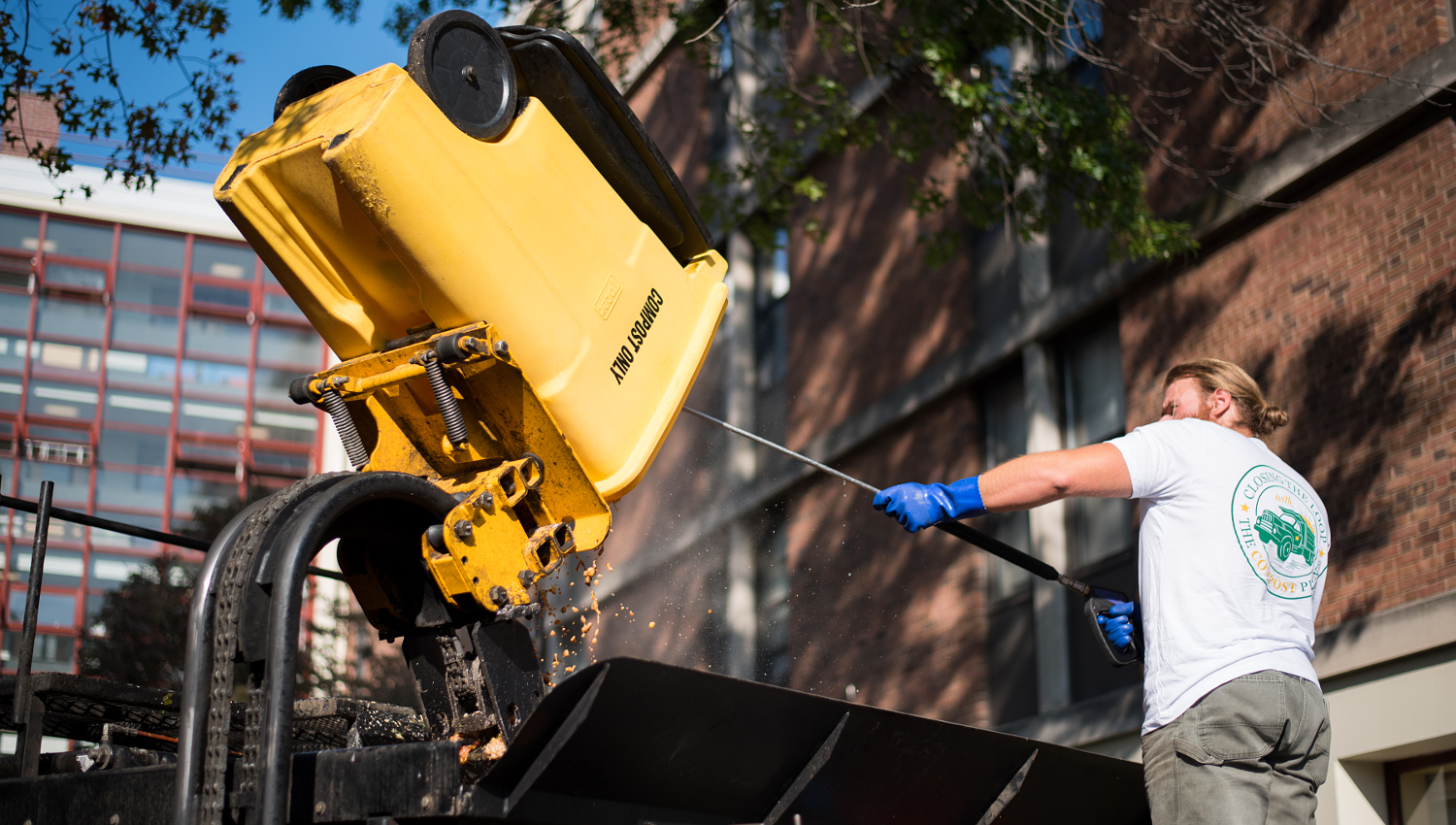 Since composting is a startup venture for the entire island, there’s nowhere to go but up.

“Our plan is to make a big push to sign up individuals and restaurants this summer,” McLaughlin projects. “On the restaurant side, we expect to get 60 of the 1,500 restaurants composting, or four percent, by the end of the summer. We think we can get a similar percentage on the residential end, from curbside and backyard, by the end of 2019. That means about 1,500 of our 37,000 households would be composting. This should scale quickly — a 20 percent compost rate is our target for 2020.”

HSHSRI was boosted with $300,000 from 11th Hour Racing’s grant program, which is funded by The Schmidt Family Foundation. 11th Hour Racing works with the sailing community and maritime industries to advance solutions and practices that protect and restore the health of our oceans.

“We’re really excited about the Healthy Soils Healthy Seas Rhode Island’s composting project,” said Michelle Carnevale, Program Manager at 11th Hour Racing. “The fact that it’s a simple practice that’s accessible by everyone in their own backyards or communities is very appealing. And, until now, it’s been hard to make the connection to island residents that dumping food waste into landfills leads to the release of methane into the atmosphere, which leads to increased atmospheric temperatures, which leads to increased ocean acidification. HSHSRI’s composting program, and the education that goes with it, makes these linkages much more digestible. And that makes climate change seem a bit less overwhelming.”

McLaughlin’s goals for HSHSRI are audacious: “Over the next two to five years, we plan to eliminate food waste from the Aquidneck Island waste system completely. We expect to eliminate plastic waste, as well, and dramatically increase our recycling rates. But that’s just a start. We plan to build a sweeping awareness of what will still go to trash — the low-to-no-value waste problem — and then how to solve it.”

With a year-round population of 60,000, Aquidneck Island is an ideal testing ground. But for the program to make a difference, it needs to scale — and fast. Clean Ocean Access and 11th Hour Racing sound like they’re up for the challenge.

“We see HSHSRI as a signal to the state of Rhode Island that we need to keep food waste out of landfill,” McLaughlin asserted. “Doing so will spawn new businesses and be an economic winner. Rhode Island should be a leader on this, as so much of our state is coastline. We’re in touch with the Director of Environmental Management; Governor Raimondo is aware of what we’re doing, as are our other statewide electeds.”

To Carnevale, HSHSRI could someday morph into HSHSUSA: “This really should serve as a pilot program for the rest of the country. In so doing, composting will become as well-known and as pervasive as recycling. And it will become clearer than ever that everything we do on land has an impact on the ocean.”